THE CURBSIDE CRITERION: THE EXTERMINATING ANGEL

(We here at Hammer to Nail are all about true independent cinema. But we also have to tip our hat to the great films of yesteryear that continue to inspire filmmakers and cinephiles alike. This week, our “The Curbside Criterion” continues where HtN staff can trot out thoughts on the finest films ever made. Today HtN Lead Critic Chris Reed gives wings to Luis Buñuel’s The Exterminating Angel .)

Spanish director Luis Buñuel (1900-1983) began his remarkable cinema career with the short surrealist masterpiece Un chien andalou (a collaboration with fellow Spaniard Salvador Dalí) – a movie made famous by its razor slashing through an eye – in 1929, which he followed in 1930 with a film even more outrageous, the barely feature-length L’âge d’or (another collaboration with Dalí), which was banned for almost 50 years for its blasphemous mocking of Christian (in particular, Catholic) imagery. At the time, Buñuel lived in Paris, but he would shortly thereafter return to his native land, immersing himself in the socio-political upheavals that would lead to the Spanish Civil War and, eventually, the triumph of Francisco Franco and the establishment of a 35-year fascist dictatorship. Buñuel was, as a left-leaning intellectual and artist, opposed to Franco, and so fled Spain for the United States and then Mexico, where he remained until, starting in the 1950s, he began his return to the international scene. All the while, he kept making movies, meaning that his career is marked by many different periods.

Beginning with Los olvidados in 1950, which won him the Best Director award at the Cannes Film Festival that year, Buñuel re-emerged as a filmmaker of note after years directing undistinguished Mexican studio fare. Subsequent respected movies of his include Nazarín (1959), Viridiana (1961), Belle de jour (1967), The Discreet Charm of the Bourgeoisie (1972) and That Obscure Object of Desire (1977), all of which received major international honors of some kind. In the middle of this career revival came The Exterminating Angel, a taut psychological thriller with surrealist tendencies that looks both backwards, to the absurdist themes of his debut, and forwards, to the increasingly satirical work of his final decade, while still continuing the sharp criticisms of societal inequities at the center of Buñuel’s more realistic Mexican dramas. Shot in Mexico – though the director had initially wanted a London location – the movie places a group of wealthy aristocrats and members of the bourgeoisie in an odd sort of trap: after a night at the theater, they return to the palatial home of one of them for a dinner, only to then find themselves unable to leave the drawing room. No concrete barrier stands in their way, yet they are somehow blocked, while those who would rescue them from the outside cannot enter the house, either, barred by the same unseen force. Days pass, and their situation deteriorates, stripping off the veneer of civilization, exterminating that which raises them above the common folks they disdain. Such is the frequent fate of the upper classes in Buñuel’s œuvre.

It’s a powerful, if occasionally stilted and unpolished (at least in comparison to what would follow) film, heralding an important shift in the director’s aesthetic. Thanks to the Criterion Collection, we now have a beautiful high-definition transfer to Blu-ray, in the original 1.33:1 aspect ratio and with the original monaural soundtrack. Picture and audio are both pristine, without noticeable blemishes or flaws. Along with the movie, the disc comes with four video extras – including a documentary on Buñuel that is longer than the main feature, itself! – as well as a booklet that includes a critical essay and excerpts from a mid-1970s interview with the filmmaker. Though perhaps not as comprehensive as some Criterion releases, this is an important – maybe even crucial – addition to any collection of the director’s works. What follows is a brief review of these ancillary items. 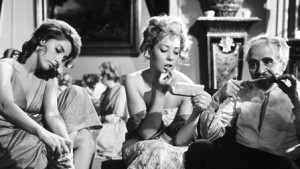 As just mentioned, there is one essay and one interview excerpt:

Again, there are four video extras:

And there you have it. There is plenty to learn about this intriguing film artist, so get to it!