(The Tiniest Place—the original title is El Lugar Mas Pequeno—screens at the 2011 Los Angeles Film Festival on June 19 and 24.)

It’s the kind of experience you approach with trepidation—any film about the civil war in El Salvador is necessarily a horror movie, and not the kind you can emotionally distance yourself from. The Tiniest Place is committed to tell the whole and deepest truth about the war, but it does so in a way that allows the viewer to take in a lot of disturbing information that might otherwise be too overwhelming: it’s grounded in real evidence of the human power to heal and regenerate even after unthinkable trauma.

Filmmaker Tatiana Huezo gently eases us into her story: an old lady describes with wide-eyed wonder the experience of returning to the destroyed village of Cinquera. Initially the film focuses on the slow-paced, daily life of the re-populated village. Masa is ground and patted into tortillas, children play, gourds are painted, a teenage brass band prepares to practice in a field. There’s a profound sense of tranquility in the landscape and the people; an uncanny quiet seems to be everywhere; new life is being nurtured (quite literally, in an oddly funny scene in which a squawking hen is made to lay on eggs bought at the market).

References to the war are at first only tangential. An elderly woman keeps a lit candle in front a picture of Gladys, her dead daughter, and speaks to her like a saint; a male survivor believes he still hears gunshots. But the film’s initial thrust is to show the visceral connection of the people to their land. Huezo avoids the pitfalls of talking heads by allowing her subjects to tell their stories in voice-over while the camera lingers on deliberately paced, powerful images of the landscape and the interviewees going about their daily routines, or standing motionless and letting the camera look into their eyes. 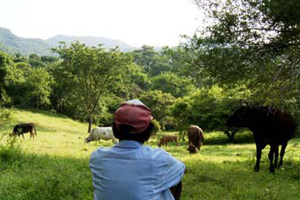 Nothing if not ambitious, Huezo wants us to take in the story not only from the villagers’ point of view, but from inside their actual consciousness. Subtle rhythms of sound and image guide us into a meditative state, beyond rational understanding, beckoning us to, in some small way, experience their mystical relationship with the earth. Cinematographer Ernesto Pardo brilliantly captures the magical, hypnotic beauty of the place: the moon rising behind dark, smoky clouds; the gentle rush of water in a brook; fog hanging low amongst lush black and green treescapes. The storytelling itself has a hypnotic, otherworldly quality, both in the cadence of the speakers and, eventually, in the gruesome-fairy-tale vividness of the imagery.

Huezo keeps us visually anchored in the land and the rebirth of Cinquera, as her characters begin to describe government forces descending on their village. Their storytelling is strikingly clear and straightforward: there is rarely a sense of anger or resentment; just disbelief and sadness.

The stories are entirely personal; there are only indirect references to the huge economic disparity within the country that fueled the uprising. There is no mention of the military assistance and hundreds of millions of dollars contributed by the U.S. to the Salvadoran government during the war. The only time politics come up is in a survivor’s reminiscence of a young, progressive Catholic priest coming to Cinquera. He explained to the villagers, who were raised to believe in humility as a virtue, what it meant to be a “subversivo.” “To be humble,” he said, “doesn’t mean you have to be stupid.”

The government unleashed hell on earth upon the people of Cinquera: they describe their harrowing attempts to flee en masse, surviving in a state of abject fear. We’re taken inside “The Devil’s Cave,” where fugitives lived huddled together in 100% darkness. Parents describe with compassion and insight the complex psychology of the children who joined the armed struggle. We find out that Gladys, who joined the rebels at age 15, told her mother “Don’t cry for me when they kill me. We belong to death.”

And yet the aftermath of the war is surprisingly hopeful. We’re shown the intense internal struggles of those who survived the ordeal, and find in them an amazing ability to heal and move forward; to rebuild and teach the next generation about class consciousness. The Tiniest Place is a film about a people’s inspiring determination to fight for its own dignity no matter the cost, and to heal from the battle. But perhaps more importantly it gives us the opportunity to experience the richness and beauty of their connection to the land, and the precious sense of self and sense of purpose they derive from it.