Water is life, and the Cuates de Australia people, living on a stretch of plains in Coahuila (the Mexican state that borders Texas), are slowly running out. In Drought, director/cinematographer Everardo González goes full-on verité, practically disappearing into the landscape, or, more specifically, becoming an organic element in the ecosystem, and captures the essence of life threatened with extinction in its depths of beauty and pain.

Drought is a daunting title, and one version of the film’s poster, featuring a dead donkey, will probably scare off a lot of viewers expecting a film about suffering and death, but this is not an exercise in humanitarian hand-wringing: González puts you in the center of a way of life with its own ways of seeing and understanding. “God knows why he hasn’t sent us rain,” says an old woman, with a childlike humility. She doesn’t claim to understand the will of a higher power; she knows and accepts that she’s at its mercy.

Drought opens with flashlight beams cutting into inky blackness: a night-hunt scene culminates in a gorgeous/horrific shot of a felled deer with glassy, unseeing eyes. Death segues into life, as González transitions to a sequence that cuts from horses f**king (completing the act in under 20 seconds) to a young couple getting an ultrasound of their fetus. González constructs this sequence and many others like a slightly abstract sculpture: there’s the shocking parallel between horse intercourse and human pregnancy, but there’s also room for the mind to roam: the tangible emotional connection of the human couple—their faces are lit up with a kind of silent, unguarded joy that’s hard to describe or fathom—couldn’t be more removed from the matter-of-fact animal humping. And González layers in further elements, intercutting a little boy telling a story about seeing the devil’s horse (which seems to be his perception of a horse getting an erection), and tying the sequence together with a lovely a capella folk song, sung in multi-part harmony. 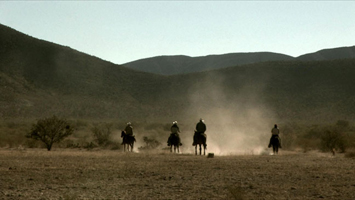 Images of water recur throughout the film, as the key to the “Australians’” physical survival, but also in its spiritual significance. The trajectory of the story follows the increasing scarcity of the water; its source, a large basin, gets inexorably smaller and muddier as God refuses to let it rain. There’s a sense that the good-natured disposition of these people comes from knowing first-hand the struggle for survival, which puts other concerns into perspective. A woman reacts with a mixture of bemusement and embarrassment when a census worker asks her if she owns a radio, a refrigerator or a truck. She shows him her family’s only possession: a donkey cart.

The cycle of life and death happens out in the open. A cow is slaughtered by cutting its throat; then a dog comes over and casually laps up the blood, as we hear the words of a baptism ceremony: “He who isn’t born of water and spirit cannot enter the Kingdom of God. That which comes from flesh, is flesh…”

The film doesn’t ask for your pity; instead it forces you to question what is happiness, what is a fulfilling life, what compromises have we made in the developed world, and what is lost in the name of safety and comfort and leisure? A little boy is shown reading from a schoolbook: “City children know the sea, but not the earth.”

González’s camera takes full advantage of the swirling dust and smoke and the breathtaking, God-revealing skies of the location to create tableaus of rich, textured, you-are-there beauty, always digging beyond postcard prettiness to reveal life and spirit.

In its final act, Drought emerges from its tapestry of sound and image to take on the heightened drama of a Hollywood blockbuster, as clouds continue to drift by without yielding a drop of rain. There are problems with the young couple’s pregnancy, and the entire community is faced with the prospect of having to pick up and leave their homes. They remain stoic, prepared for whatever fate God has in store, as the story builds to a finale that is nothing short of Biblical.

A Conversation with Everardo González (DROUGHT)

NIGHT TOO YOUNG, A