(Wah Do Dem is now available on DVD through Factory 25. It opened in NYC and Los Angeles on Friday, June 18, 2010, and Boston on June 25, 2010, before expanding to other cities in the following weeks and months. Visit the film’s official website to learn more.)

Ben Chace and Sam Fleischner’s scrappy Wah Do Dem—winner of the lucrative Target Award at the 2009 Los Angeles Film Festival—left me with a curious reaction. Were the filmmakers commenting on a certain type of privileged American who exudes an unconscious air of entitlement when his soles step onto the dirt of a foreign land? Or were my allegiances meant to gradually align with this film’s particular young hero, he of the Caucasian skin tone who liveth and imbibeth in the Brooklyn shoreline neighborhood calledeth Williamsburg? If the former, Wah Do Dem succeeds. If the latter, things start to get shaky.

The brisk film (75 minutes) opens on the Williamsburg waterfront, as hipster Max (musician Sean Bones) brings a six-pack of Red Stripe to his sunset date with his strikingly pretty girlfriend Willow (superstar musician Norah Jones, who’s in and out before you know it even though she’s billed as a main player) so they can fantasize about their upcoming Caribbean cruise. Only Willow has had enough of Max. So much so that not only is the cruise off; their relationship is off too. 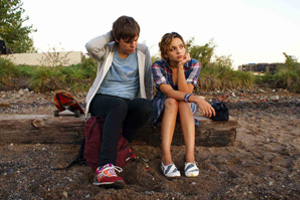 After polishing off the six-pack all alone, Max seeks shelter—and solace—at a nearby bar with friends, who assure him that Willow was too self-absorbed and stuck up to appreciate him. Which triggered my first confused thoughts. Were these friends merely trying to cheer Max up by saying these derogatory things? Or was Willow, in fact, a bad girlfriend, even though the filmmakers never show us even the slightest hint of this? Or was this meant to convey the relative cluelessness/arrogance/callousness of Max and his friends? Or were the filmmakers merely trying to move the plot forward and get Max onto that cruise ship all by his lonesome and I wasn’t supposed to be considering these things?

Unfortunately for him, Max is unable to find a traveling buddy—all his soft-ass friends have, like, jobs and shit—forcing him to go it alone. The cruise ship itself is as cheesy and confining as we have come to expect (thanks most directly to the one-and-only David Foster Wallace, whose “A Supposedly Fun Thing I’ll Never Do Again” is the definitive treatise on this privileged form of recreation), and Max’s worries about traveling alone are confirmed pretty much every step of the way. At one point, Max is confronted by an oddball passenger, played by a hilarious, scene stealing Kevin Bewersdorf, who drills that weird dude who always crops up in situations such as these. Bewersdorf is so refreshing that it makes you wish he had accompanied Max on land once the ship finally docks in Jamaica, though that clearly wasn’t the movie the filmmakers had in mind. 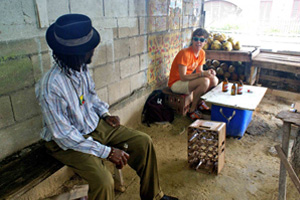 In Jamaica, Max’s romantic notions of the culture he has admired from afar are quickly put to the test. Soon, he’s shoeless, bagless, moneyless, and watching the cruise ship sail away into the night. Which is when Max’s personal lesson in humility begins in earnest. Only is it in earnest? Late in the journey, on the cusp of finding salvation at the American Embassy in Kingston, Max is confronted by a blade-wielding local on a bicycle. Knowing he has nothing to offer and exhausted from his journey, Max brushes him off and continues walking down the road. Eventually, the mugger changes his tune and becomes Max’s bodyguard, ensuring his safe navigation through the city. When he gets him to the Embassy’s doorstep, he doesn’t ask for a dime and Max wanders off with a seemingly thankless thank you. Again, this raised more distracting questions for me. Was this a pointed decision on the filmmakers’ part to defend the kindness and humanity of the Jamaican people, to subvert expectations? While that’s commendable, I was too distracted by the half-assed goodbye that Max gave. Were we supposed to align with Max and think that this guy didn’t deserve at least some form of payment for his actions? At least as acted by Bones at this moment, I wondered if Max had actually taken any of this entire experience to heart, or if he’d return to his life back in Williamsburg bragging about his vision quest and pick-up soccer game with “the locals.”

Chace and Fleischner’s most impressive feat with their film is how they manage to cross off a predictable checklist of situations while making them still feel fresh and natural (a particularly intriguing moment is when we see the 2008 Presidential election results as they happen in real time). Though Wah Do Dem never reaches the social realist heights of the work of Sean Baker (Prince of Broadway, Take Out), it is nonetheless a spirited effort from two young American filmmakers who are trying to do more with less.