Drama
Foreign
On the Festival Circuit

Norwegian director Erik Poppe’s third feature, Troubled Water (DeUsynlige), garnered both the Jury and Audience Awards for Best Narrative Feature at the 2008 Hamptons International Film Festival. Well deserving of both, it’s an arresting probe into morality and forgiveness that leaves one stunned not only by its emotionally stark performances, but also by the film’s complex, musical structure that quietly underlies the narrative and binds everything together. Making his acting debut, Pal Sverre Valheim Hagen plays Jan, a church organist recently released from prison who is haunted by a crime he committed as a teenager for which he refuses to take full responsibility. Thinking it harmless folly, Jan and a friend ran off with a young child in a stroller; however, they were caught by surprise when tragedy accidentally struck. Legally held responsible for a murder he did not physically—nor intentionally—commit, Jan finds himself caught between guilt and innocence, never quite sure how to reconcile the youthful ignorance of his intentions and their unintended, fatal consequences.

Jan’s job as a church organist only fuels his moral contradictions. While claiming he doesn’t need forgiveness (as he isn’t guilty), the physical act of performing is an undeniably cathartic experience. The sight and sound of Jan’s rendition of Simon and Garfunkel’s “Bridge Over Troubled Water” is monumental: the escalating tension of colliding dissonances and octaves becomes the embodiment of Jan’s spiritual anxiety. His hopes and fears converge in the character of Anna (Ellen Dorrit Petersen), a single mother who is also the priest at the church where Jan performs. Through Anna and her child, Jan comes face-to-face with the ghosts that have haunted him since that fateful day so many years ago: they offer the divergent possibilities of both spiritual redemption and further condemnation. 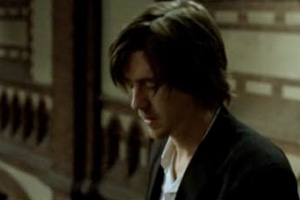 Like one of Bach’s fugues that Jan plays, every narrative always has a counterpoint, flowing simultaneously and telling its own side of the story. Midway through Troubled Water, Poppe smartly switches to the point-of-view of Agnes (Trine Dyrholm), the distraught mother of the deceased child whose trauma is revived when she discovers Jan has been released from prison. Whereas Jan’s story was concerned with the prospect of redemption, Agnes’ is preoccupied with revenge. Poppe refuses to side with either character, and instead assumes the difficult responsibility of creating total empathy for both Jan and Agnes.

Poppe never simplifies the larger issues at hand, but he also contains them so they don’t wander off into vague-but-grandiose quandaries. The fugue-like structure of the script, which fittingly culminates with the fusion of both narrative perspectives, exhibits the care and concern that Poppe has put into constructing his movie. The pitch-perfect acting from the three leads shows a remarkable range of approaches, from Hagen’s weighty silence, to Dyrholm’s sudden emotional shifts, to Petersen’s implosion in the film’s final moments when everything and everyone she has come to believe in falls apart. Challenging and engrossing, Troubled Water is nearly impossible to tear your eyes away from.