Taking Father Home is a marvel of low-budget filmmaking: a debut feature film shot on a borrowed video camera for less than $5,000, using friends and non-professionals for actors, and all without the permission of the Chinese government. Director Ying Liang trumps every technical and economic limitation through his highly refined visual sensibility, as elegant as it is imaginative. And yet it’s rather limiting to consider the film only in terms of its “limitations”—Ying makes no excuses for its rough-around-the-edges quality, which only adds to its DIY attitude. Like the film’s main character—Xu Yun, a young boy of seventeen who leaves his country home in search of the father who abandoned his family years earlier—money is the least of worries, and is only an impetus for invention and determination.

Ying’s Neo-Realist aesthetic is as visceral as Vittorio de Sica’s, yet he purposefully avoids the Italian director’s characteristic sense of sentimentality and pathos. We are given no access to Yun’s thoughts or feelings on his journey: we are left only with his gestures, actions, and sparse dialogue to interpret. While on a bus to the city, Yun makes the acquaintance of the first of several problematic father figures that will appear throughout the film—all of whom either abandon Yun, or whom he runs away from. Their relationships are based on actions: one teaches Yun how to eat watermelon like a man (that is, hurriedly and sloppily with big bites), while another shares his razor with the young boy, and all of them are involved with Yun’s exhaustive search for the father’s mysterious hotel address—a location which no one in the city seems to have heard of. 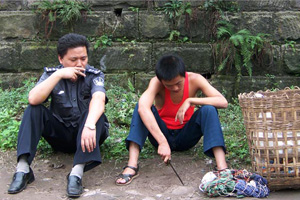 Yun carries with him two ducks as his only currency, and throughout the movie they are forever poking their head out of the basket. They are like Ying’s camera: peripherally involved in the story, but more aware of the world surrounding them. Ying’s style simultaneously recalls Hou Hsiao-Hsien—particularly his static compositions and narrative ellipses (both Hou and Ying prefer fragmentary stories in which the most dramatically important events are left off-screen)—and Jia Zhangke. Like in Jia’s Still Life, there is a documentary quality to the background of Taking Father Home’s compositions that runs parallel to the fictional narrative that plays out in the foreground. Within shots that can last up to several minutes, the camera almost always remains steadfast, rarely altering its composition—and yet the action rarely stays at the center of the frame: characters are likely to wander way off into the distance, performing key actions without easy access for the viewer, while others speak from off camera, never revealing their bodily presence.

In purposefully distancing us from the characters and their story, Ying has created an unusual contradiction: essentially, Taking Father Home is a first-person narrative (Yun is in every scene), yet we never connect with him on an intimate level. He is an enigma, and our disassociation with him only increases as his violent tendencies come to the surface, through the long knife that he carries for protection, and in the shocking yet sobering confrontation with his father. What’s so refreshing about Ying’s approach is that he never cheapens Yun’s emotions by pretending to understand them. He leaves the sanctity of Yun’s desperation and revenge alone, placing viewers in the same place as himself—as an unobtrusive observer.

But while we are (not) watching Yun, there’s a much larger story unfolding in the periphery: the warnings of a coming flood that will devastate the area. Intermittent radio and television announcements echo through the streets, mixing with the din of cars and passersby. By the end of the movie, however, the warnings can’t be avoided, and as the city is evacuated, the urban desolation is a perfect visual metaphor for Yun’s growing inner desperation. Ying’s reticent use of metaphors is but a fraction of his sophistication as a director. His imaginative sense of narrative (at once modernistic but also highly playful, and never at a loss for a sense of humor, or humanity) and resourcefulness as a director are clearly evident in his first feature film. (He has since completed another feature, The Other Side, which hasn’t been distributed theatrically in the US.) Ying Liang’s name is certainly one to watch out for in the near future. 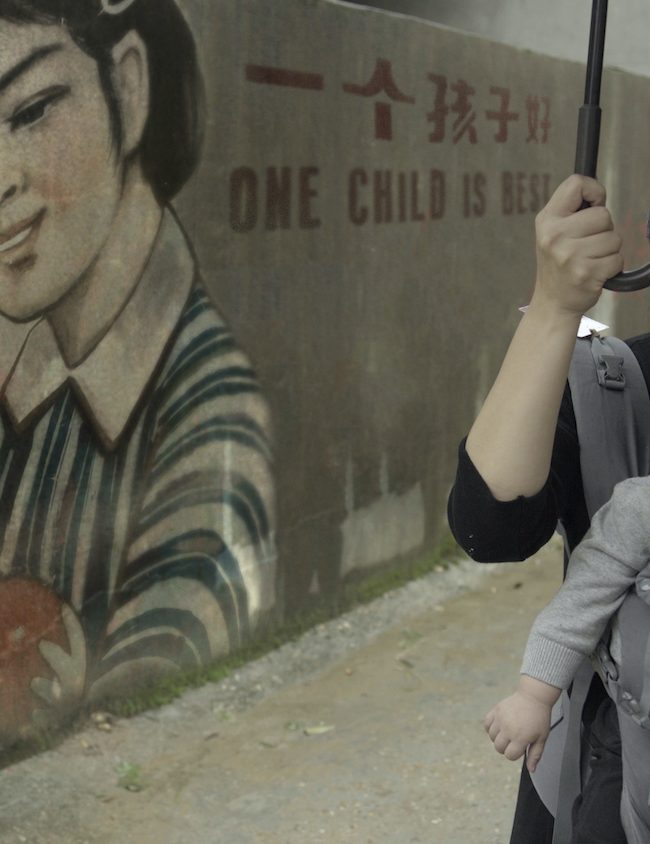