(To commemorate the death of the great Chantal Akerman, and in celebration of Film Forum’s revival of her youthful masterpiece Jeanne Dielman, 23 Quai du Commerce, 1080 Bruxelles, we’re reposting Nelson Kim’s review originally written for the movie’s run at Film Forum in January 2009. Jeanne Dielman‘s current run ends on Thursday, April 7; go here  for more info and to buy tickets. And don’t miss BAMcinématek’s career-spanning retrospective, Chantal Akerman: Images Behind the Images, now through May 1, which includes screenings of her final film, No Home Movie. Details here.)

A fortyish brunette, slender, pretty, perfectly composed and precise in her movements, prepares a meal in her kitchen. A buzzer rings. She opens the door for an unsmiling older man—and here, the attentive viewer might note what I missed my first time around: our heroine holds her hands clasped tightly together in a gesture that could be read as simple Euro-bourgeois politeness, but could also suggest some darker impulse bubbling beneath that smooth veneer. The woman leads the man down the hall. Jump cut to some time later: now the woman stands waiting as the man dons his hat and coat, gives her some money, and leaves. Then she goes into her bedroom, removes a towel from the slightly mussed bedspread, and cracks open the window. She scrubs herself off in the bath, and returns to the kitchen to finish making dinner for her teenaged son, who’ll soon be home from school.

This is Jeanne Dielman, single mother, widow, and one-john-a-day prostitute. And this is Jeanne Dielman, 23 Quai du Commerce, 1080 Bruxelles, Chantal Akerman’s 1975 feature, now playing at Film Forum in a glorious new 35mm print. As several critics have pointed out over the years, Jeanne Dielman’s storyline verges on lip-smacking melodrama—hot single mom turns tricks to get by!—but Akerman has purged her tale of any traces of cheap thrills or sudsy emotionalism. The movie’s formal strategy bears the influence of the minimalist/structuralist strains of 1960s and ’70s avant-garde filmmaking: Warhol, Straub and Huillet, Michael Snow, Ernie Gehr, and others who pushed the limits of spareness, slowness, duration, and repetition. Nearly three and a half hours long, Jeanne Dielman is a severe and demanding viewing experience, but if you’re up for the challenge, you might leave the theater convinced you’ve seen one of the towering masterpieces of modern cinema. 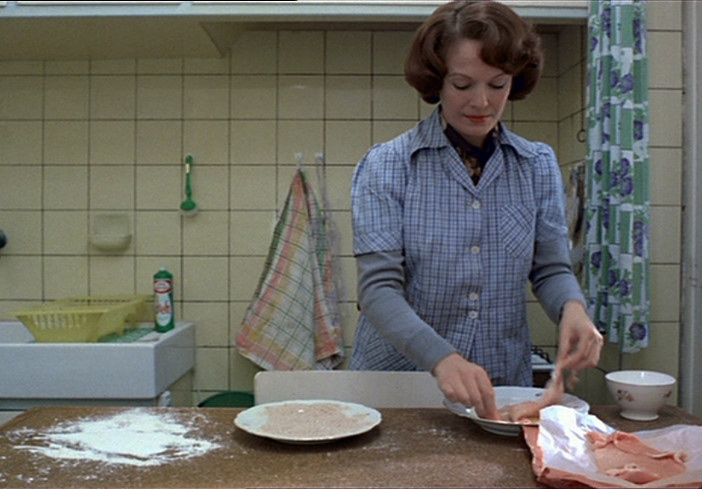 Jeanne Dielman takes place over a roughly 48-hour period, from a Tuesday afternoon to a Thursday afternoon. For the first 24 hours of story time, about half the length of the film, Jeanne is a study in inscrutable calm, going about her business with a half-smile glued to her face that might put you in mind of the Sphinx, or the Mona Lisa. The camera never moves, cinematographer Babette Mangolte’s compositions are resolutely undynamic, the scenes unfold in real-time long takes, and the actions within the scenes are the most mundane of domestic routines—cooking, cleaning, shopping. (Though Akerman has denounced simplistic gender-based readings of Jeanne Dielman, she once told an interviewer, “I do think it’s a feminist film because I give space to things which were never, almost never, shown in that way, like the daily gestures of a woman.”) When Jeanne eats a sandwich, or makes the bed, the tasks take as long as they would in real life. And yet, these chores are never a chore to watch. The laserlike focus of Delphine Seyrig’s performance, and Akerman’s exquisite formal mastery, draw you in to the point where your metabolism seems to wind down to match the film’s metronomic slow-but-steady pulse. Something remarkable begins to happen: the smallest movements of face and body absorb your complete attention, the subtle shifts of light as late afternoon turns to evening and dawn to morning become spellbinding mini-dramas, the most banal lines of dialogue loom in the air heavy with portent.

All this is preparation for the film’s second half, after Jeanne’s Wednesday-afternoon customer takes his leave. The film repeats the actions of the first half: Jeanne finishes cooking dinner, her son comes home, they eat, take a walk, and turn in for the night; the next day, Jeanne goes through her morning routine, runs errands, and prepares dinner while awaiting her Thursday-afternoon john. But this time, things have changed. Little cracks in Jeanne’s armor start to appear. Her hair is out of place. She neglects to fasten a button on her robe. She leaves food on the stove too long. By now we’re so immersed in the film’s pace, so attuned to the minutiae of Jeanne’s everyday grind, that these tiny deviations from the norm are jarring; when she drops a spoon, the clatter it makes as it hits the floor resounds like a gunshot. 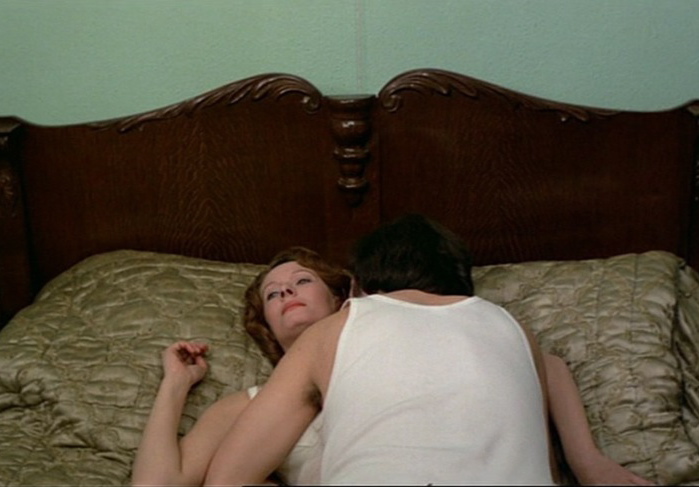 The film climaxes with a sudden, startling action that immediately—as soon as the shock subsides—sets you wondering. What did that mean? Have we just been witness to an existentialist acte gratuit? Is Akerman playing one final anti-narrative trick on us, throwing back in our faces the desire for closure or “significance”? Or were we carefully led here all along? The mind runs back through the story searching for clues, and they’re there to be found, but it’s like an Easter-egg hunt that never ends; the movie is a machine that generates purposefully alternating, or ambiguous, readings. Was Jeanne the victim of a repressive social order, or of her own willing submission to a rigorously circumscribed existence? Did she hate men, and hate what they made her do, or (as the ending suggests) was she horrified to discover that she actually liked what she was doing? Was it the disruption of her routines in the second half that pushed this creature of fixed habits to the breaking point? (But what caused the disruption to begin with?) And what about those too-tightly clasped hands that greet her male visitors—surely it means something that the gesture recurs when her son comes home? Every possible interpretation glides off the film’s impeccable, impenetrable surfaces. So we’ll have to go on watching, thinking about, and discussing Jeanne Dielman. If it’s not a movie for all time, it’ll probably hold our interest as long as men and women have sex, women bear children, human beings occupy domestic interiors, and the day-after-day regularity of our lives chills our hearts with hints of dread.