IN A LONELY PLACE

As its Nicholas Ray retrospective draws to a close, Film Forum is bringing back Ray’s 1950 noir classic In A Lonely Place for a return engagement. This corrosively brilliant tale of thwarted love inspired career-best work from its director as well as its two stars, Humphrey Bogart and Gloria Grahame. Bogart plays Dixon Steele, a middlingly successful Hollywood screenwriter with problems: a drinking problem, a violence problem, women problems, and violent-with-women-when-drinking problems. When a hat-check girl he entices to his apartment one night ends up dead, only the alibi provided by his neighbor, Laurel Grey (Grahame) saves him from arrest. Laurel and Dix fall hard for each other, but soon she has reason to wonder whether the man whose innocence she fought for may, in fact, be guilty—and whether she may be his next victim. 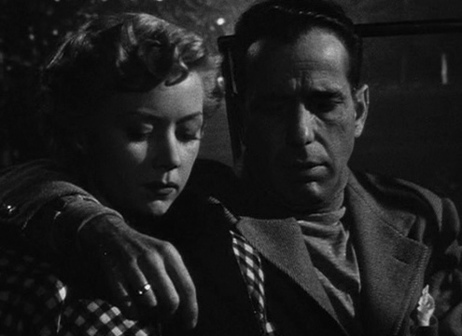 Exegetes have long read a political subtext into In A Lonely Place: Ray, a committed lefty, may have intended the story to stand as a metaphor for McCarthy-era fear and paranoia. But along with the subtext, there’s a lot of text going on here as well. The film is thick with multiple meanings, and part of its enduring fascination is how Ray makes it work on so many seemingly contradictory levels. It’s a great and achingly romantic love story that also, no less than Hitchcock’s Vertigo, lays bare the fetishization, the willful blindness, and the madness of romantic obsession. It’s a portrait of an artist that valorizes the artist’s solitary stance against conformity even as it exposes the egotism of that stance. It’s a film noir in which the hard-boiled hero meets a mysteriously alluring femme fatale—and then, in one of the boldest audience-identification switcheroos I’ve ever seen in a movie, it subtly but definitively shifts our POV over to Laurel as her doubts about Dix take hold. We start out grooving to Bogie’s tough-guy routine, but by the end we’re shrieking at Grahame, “Get away from him, girl! Can’t you see he’s no good?”

By 1950 Bogart had already enjoyed nearly a decade as one of Hollywood’s top box-office draws, and his star persona was well established. But for this movie, the star (and partial backer of the film, through his production company, Santana) fully committed to a ruthless deconstruction of his own image. It’s as if he and Ray were asking what the beloved Bogie persona would be like in real life, stripped of all movie-made glamour and grace, and the answer is: an acid-tongued, violence-prone drunk. Along with everything else, In A Lonely Place offers the riveting spectacle of an actor—guided by a director who identified to no small degree with both actor and character—seeming to reveal the darkest recesses of his own personality to the camera.