(Everyone Else is now available on DVD

through Cinema Guild. Maren Ade’s first feature, The Forest For The Trees, is distributed by Film Movement and can be bought at Amazon

or streamed at Netflix.)

The second feature by the young German writer and director Maren Ade received its U.S. premiere at the 2009 New York Film Festival. It crept into town with a minimum of attention, amid a slate that boasted new work by old masters (Bellocchio, Oliveira, Resnais, Rivette), established mid-career auteurs (Costa, Denis, Haneke, von Trier), and acclaimed younger provocateurs (Dumont, Korine, Solondz). But for me and many other viewers, Everyone Else was the unexpected highlight of the festival—a love story bristling with insights, a jolt to the head, a kick in the heart.

The film begins unassumingly, and remains in that modest register throughout; it’s a great vision built out of the accumulation of small, precisely observed details. A 30-something man and woman are staying at his parents’ vacation house in Sardinia. Chris (Lars Eidinger), a gifted but floundering architect, is given to passivity and mood swings. His girlfriend Gitti (Birgit Minichmayr), a tomboyish music-biz publicist, is more aggressive, outgoing, and upbeat. Both seem content with the fact that they don’t fit traditional gender roles or live by bourgeois standards of taste and achievement: they’re proud, perhaps to a fault, of not being like everyone else. But an encounter with another couple—Hans, a smoother and more successful architect (Hans-Jochen Wagner) and his pretty, doting clothing-designer wife Sana (Nicole Marischka)—makes them begin to question the way they define themselves, individually and together: Chris takes on more alpha-male characteristics, while Gitti hits the kitchen, the dress shop, and the makeup counter. Once seemingly safe in their private world of shared jokes and silent understandings, they’re now sent scuttling for cover as their deepest fears and insecurities are forced into the spotlight. 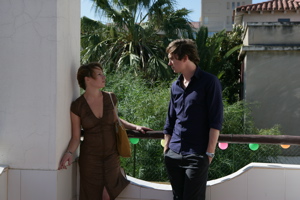 In bare outline, Everyone Else may sound like a neat and cleverly symmetrical construction, but moment to moment it unfolds in the most unclassifiable, unpredictable, and miraculously organic manner. I don’t know if I’ve ever seen a more nuanced on-screen portrait of a relationship. Its devastating accuracy has little to do with whether one identifies more with Chris or with Gitti, or indeed with Hans or Sana: what matters is how beautifully the movie captures the overall dynamic of being part of a couple. Anecdotal evidence suggests that the film especially resonates with viewers close to Chris and Gitti’s age—quite a few people I’ve spoken to share my feeling that Ade and her two amazingly resourceful actors have somehow nailed us, in ways both discomfiting and terrifically exciting. Among the things the film gets exactly right is its feeling for the emotional and mental landscape of the years between youth and not-youth, between the who-will-I-be-today mutability of one’s twenties and the darker uncertainties of middle age. In the first scene, Chris and Gitti babysit for his more settled and conventional older sister; they behave as if being grownups is a game they’ve chosen to play. In the film’s final moments, they themselves pretend to be children—but they, and we, know that there’s no escaping what they’ve learned over the last two hours: this is no game, and there are no grownups here, only their own frightened faces staring back from the mirror.