Drama
On the Festival Circuit
Thriller

Typically, when we speak of film as a collaborative art form we mean that the production process involves so many people (be it dozens or hundreds) that, at some level, assigning individual credit is insufficient and misleading. No one element in a completed film exists on its own: always it is interacting with other sights, sounds, and processes. Daniel and Abraham takes this notion of collaboration to an ambitious, minimalist extreme. The entire crew of this feature film consists of three people: director Ryan Eslinger, and the film’s sole actors David Williams and Gary Lamadore. All three shared writing duties, as well as all the other behind-the-scenes responsibilities. However, this stripped-down, DIY production style makes for more than just an interesting back-story to relate in interviews and post-screening Q&As. Instead, it’s an ironic counterpoint to the film’s narrative of deep-seated mistrust and human disconnection. The intense participation and investment of the makers comes through loud and clear on-screen.

Shot on-location in Catskill Mountains on the crest of winter, the movie begins with Daniel (Williams) parking his car and embarking on what appears to be a lengthy hiking journey. On the trail, he comes across the burly, gray-haired Abraham (Lamadore), whose demeanor is disconcertingly ambiguous. Are his comments about Daniel trespassing on his land intended as threats or coy jabs? Against all protests, Abraham is unable—and unwilling—to leave Daniel alone on his journey. At first offering to act as a guide, Abraham’s motivations become increasingly suspect as his patronizing sensibility becomes less passive-aggressive and decidedly more active. Naïve and unprepared for the journey, Daniel ultimately finds himself at the mercy of his two greatest threats: nature and Abraham. 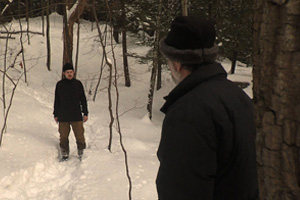 On the trail, the two men’s conversations alternate between the pragmatic and the personal, but neither is very forthcoming with details. Daniel is on his way to spread his estranged father’s ashes, while Abraham has taken to the woods because of his own troubled relationship to his children. The surrogate relationship they find in one another, however, is less about atonement than aggression. Each of their inveterate father-son resentment manifests in each other. Unrequited rage steadily builds as they move deeper into the woods, culminating in a back-and-forth power struggle for control over their only knife, at once a symbol of survival, potential violence, and masculine authority (much like the conch in The Lord of the Flies).

Through Eslinger’s redolent direction, the desolate and treacherous landscape increasingly morphs from naturalistic surroundings into a projection of the characters’ own tortured psychological states. Like some phantom, Abraham can disappear from sight or appear directly behind you without warning: so familiar with the woods is he that he seems to be able to bend time and space. Daniel, on the other hand, seems lost in a snow-filled vacuum, and Eslinger’s eerie, ethereal score only enhances the alien-quality of the terrain. Paranoia even overtakes the soundtrack, at times masking sounds of approaching footsteps or over-emphasizing a pounding hammer. Similar to Daniel in his increasingly frenzied state, our hearing can’t always be trusted, which is at once a blessing and a curse. Together with his collaborators Williams and Lamadore, Eslinger achieves a sense of narrative balance, upon which the success and complexity of the story rests. Daniel may appear first in the title, but the film doesn’t necessarily privilege either him or Abraham. Instead, there’s a wonderful ambiguity to their actions and motivations that allows us imagine their lives outside of the movie and to think how their pasts (only briefly hinted at) are affecting their behavior. That the story can simultaneously be seen from both or neither of their perspectives is indeed something special.

Like well-trained musicians, the makers of Daniel and Abraham seem to be able to anticipate each other’s movements and actions. (Music seems a fitting analogy, considering the role of “the trio” across centuries and vastly different styles of music, from Beethoven’s Piano Trios to the Bill Evans Trio to Sleater-Kinney.) All the aspects of cinema are moving harmoniously in Daniel and Abraham. Nuances of acting are impeccably aligned with the camera’s field of vision, just as the precise soundscape blends with the editing to carve out the particularities of time and space. From composition and lighting to gesture and dialogue, mechanics and poetics function in tandem not just to add atmosphere to the story, but to irreversibly put it into motion.