Fb. In. Tw. Be.
Documentary
Foreign
In Theatres
On DVD

(Videocracy was picked up for distribution by Lorber Films. Visit the film’s page at the Lorber website to learn more.)

If you’re looking to feel better about America’s grotesque fascination with reality television and the cult of inane celebrity that has ruined our small screens (and supermarket racks, though I suppose they were always a lost cause), then Erik Gandini’s Videocracy is the movie for you! Gandini’s expose on Italian Prime Minister Silvio Berlusconi and his exploitation of his country’s media culture for his own lucrative purposes would be funny if it were a parody. Instead, it more often feels like a Cronenbergian vision of a horrifically trashy future. I usually revisit films I’m writing about if it’s been more than two months since I last saw them, but in the case of Videocracy, I was too scared to watch it again.

Let it be known, from the get go, that Gandini has no intention of being “fair” and “well-balanced” with regards to his material. But when watching the opening sequence unfold, in which Berlusconi’s rise from media mogul to political godhead is documented through some jaw-dropping video clips of the propagandist depths to which Berlusconi sank/sinks, there doesn’t seem to be anything subjective about this situation (though, having said that, I’d love to watch a counterpoint documentary about this very topic—anyone? anyone?). 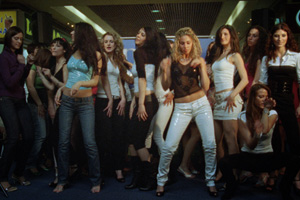 It’s impossible to cover a sweeping subject like this with any semblance of thoroughness, and so Gandini opts to focus on a few pawns in the system. On the lowest end of the totem pole is Ricky, a dreamer who believes that his uniquely executed combination of singing and martial arts will turn him into a television star (good luck with that, Ricky). On the other end is Lele Mora, a powerful TV agent who brags about having the power to single-handedly turn a nobody into a somebody simply by saying it is so (good for you, Lele). And then there’s the sickening middle, as symbolized by Fabrizio Corona. A well-connected paparazzo, Corona makes his money by taking pictures of major players in compromising positions and then selling them back to his subjects for outrageous sums. But when Corona is convicted of embezzling and goes to prison, he uses this opportunity to turn himself into a star.

In a movie filled with moments and characters that are too-icky-to-be-true, Corona is the sleaziest. And in a year filled with sleazy images, it will be hard to top Corona’s shower scene and subsequent lathering up of his body before going to a club so people can pay to… look at him. It is in these moments when Videocracy feels like both an extremely distorted condemnation of celebrity obsession and a scarily accurate reflection of our own nightly TV lineups.

Gandini saves his most shocking image for last, as a stage packed with young girls dance recklessly for a spot to become a “veline” (aka, a showgirl who does nothing but stand there and look pretty). As the film’s unsettling score builds and thumps to a fever pitch, Gandini appears to be giving the girls—and us—one final chance to jump off the stage, to change the channel, before it’s too late.