FILMS OF JAY ROSENBLATT – VOL. 1, THE

(The Films of Jay Rosenblatt – Vol. 1, along with the other films discussed below, are available for sale or rental from Rosenblatt’s website.)

The Biography page on Jay Rosenblatt’s website tells us, “He has a Master’s Degree in Counseling Psychology and, in a former life, worked as a therapist.” Which makes perfect sense to anyone familiar with his brilliant documentary essays. Based in San Francisco, Rosenblatt first made his mark on the festival circuit in the 1990s with a series of short films that dealt explicitly with the raw materials of therapy—hidden fears, anxieties, and compulsions; childhood traumas; the tangled roots and twisted branches of our psychic makeup. Six of these early works are now available on a new DVD compilation, The Films of Jay Rosenblatt – Vol. 1. They range in length from one minute to half an hour. All are constructed out of found footage from old newsreels and industrial and educational films, with voiceovers and titles added. Three of them rank among the filmmaker’s best and most representative works.

The Smell of Burning Ants (1994) is a 21-minute monologue written in the third person, read over slow-motion images of childhood brutality—schoolyard taunts and rough-housing, boys torturing animals and insects. The narrator recounts how growing up in a culture marked by machismo, misogyny, and male violence affected him later in life. Though the monologue is primarily autobiographical (Rosenblatt says he also drew on the memories of longtime friends, to create a kind of generational composite), the movie is really an essay on how boys are socialized, with the details of the narrator’s experience meant to stand for what boys almost everywhere undergo. According to the film, fear lies at the heart of male identity-formation. The fear of being bullied makes one into a bully, the fear of being considered girlish makes one unable to communicate with girls, the fear of being thought weak makes one fetishize a false myth of male impregnability. Rosenblatt’s argument in The Smell of Burning Ants is a relentlessly grim and pessimistic one, and while watching the film there were times I felt it slip into a kind of overdetermined shrillness. But in its best moments, it wormed its way under my skin, dredging up long-buried, shame-inducing childhood memories of being both victim and victimizer. I’ve never encountered a work of art in any medium that speaks so candidly about those sordid aspects of boyhood that make grown men wince in recollection. 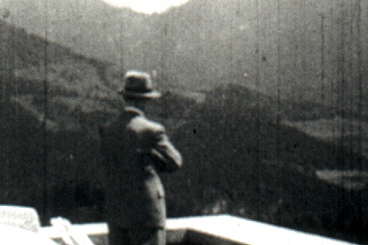 Human Remains (1998) presents biographical sketches of five 20th-century dictators—Hitler, Mussolini, Stalin, Franco, and Mao—in the form of monologues written in the dictators’ voices and read over archival images of their lives and times. The monologues combine direct quotations with inferences or inventions from Rosenblatt’s research. We get recitations of medical data (both Hitler and Mao had only one testicle), intimate confessions (Stalin says that after his first wife died, “with her died my feelings for all humans”), banal accounts of daily routines (diet, exercise, hygiene), philosophical ruminations (Mao: “An unkind father will have an unkind son”). Rosenblatt keeps a poker face on, so to speak, throughout the half-hour running time of Human Remains. He locates some common motifs among his subjects’ lives, but draws no clear-cut conclusions, lets us glean what meanings we will. These fascinating, richly ambiguous portraits steer clear of any grandiose rhetorical formulations about Great Men of History and the Nature of Evil, and the film pointedly avoids any mention of the dictators’ political beliefs or their regimes’ policies and programs. Instead, they’re presented as men like any other, as mundane as they are mysterious, a jumble of frailties, frustrations, body-image issues, hobbyhorses, passions, petty resentments. The human remains of the title, like the recurring images of a grave being dug, may stand for the testimony of the murderers, the price paid by their millions of victims, or the fate that awaits us all.

King of the Jews (18 minutes, 2000) comes in three parts. In the first section, the autobiographical essay “Jesus and Me,” Rosenblatt discusses his problematic relationship to Jesus Christ. Growing up as a Jew, he bought into and internalized the anti-Semitic canard that the Jews had killed Christ; partly as a result, he feared “the whole world was against us”—not only every Christian in Christendom, but also the Nazis, Irish street gangs, pork in all its forms, and a myriad of other real and imagined threats. The second section, “One of Us,” moves into a more scholarly mode, as Rosenblatt traces the long history of Christian anti-Semitism back to the early days of the church. I was underwhelmed by these first two parts—they seemed to be covering territory that many other writers, artists, and thinkers have explored with greater wit and insight. Nevertheless, this lifelong atheist found himself quite stirred by the concluding section, “The Light Is All About Us,” a wordless montage conflating Crucifixion scenes from Hollywood Biblical flicks, archival footage of the Holocaust, and more. The film’s various themes and threads are reconciled in a bold, beautifully edited, and big-hearted expression of spiritual yearning.

Over the last decade, Rosenblatt has ramped up his productivity, turning out fourteen films since King of the Jews. The strongest of these continue to mine his interest in how private pain manifests itself as symptoms in the culture at large. Phantom Limb (2005) begins as autobiography (his younger brother Elliot died when Jay was nine), then expands outward to a wider investigation of grief and loss. I Just Wanted To Be Somebody (2006) is a biographical study of Anita Bryant, the former pop singer, beauty queen, Florida Orange Juice pitchwoman, and 1970s anti-gay activist. In ten short minutes, Rosenblatt sketches the broad outlines of Bryant’s life, condemns her campaign against anti-discrimination laws, and (via author Fenton Johnson’s open letter to Bryant, read by Johnson toward the end of the film) reaches out to her in an attempt at understanding: “At the time of your campaign, perhaps you had not known much suffering, or perhaps the nature of your suffering had not yet made itself clear.” 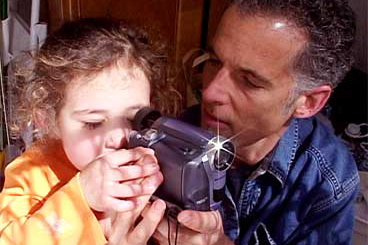 The birth of Rosenblatt’s first child, a girl, has opened a new lane for his work. He has been making a series of diary films—home movies of his daughter, essentially. On paper, this would seem to represent a massive rollback in ambition. In practice, these new short pieces are a delight. Yes, they’re home movies, and their ultimate effect is nothing more than to provoke an extended “Awwww!!!” But these are home movies made with a veteran filmmaker’s attention to form and structure—and it doesn’t hurt that Rosenblatt’s daughter is a great camera subject: feisty, forthright, and completely adorable. The first three diary films (I Used To Be A Filmmaker, I Like It A Lot, and I’m Charlie Chaplin) are available on a single DVD. But my favorite by far is the most recent, 2008’s Beginning Filmmaking, which premiered last month on HBO after a festival run. Ella Rosenblatt tells her father that she wants to be a filmmaker, so for her fourth birthday, he buys her a camera and then, over the following year, tries to teach her how to use it. Ella struggles to master her craft, learning the hard way about the need for compromise and the yawning gulf between idea and reality, e.g., why making a movie about fairies isn’t nearly as much fun as sitting around thinking about fairies. Beginning Filmmaking is a Man With A Movie Camera for the Dora The Explorer set, and probably the most flat-out enjoyable film I’ve seen all year.