(The Canal Street Madam screens as part of the Stranger Than Fiction series at the IFC Center at 8pm on Tuesday, October 19, 2010. Visit the film’s official website to learn more.)

Alongside the mafia, private detectives, and mercenary action heroes, prostitutes are among the most romanticized subjects in movie history. With The Canal Street Madam, Director Cameron Yates thankfully brings a sobering dose of reality and a sympathetic, yet complex, face to these latter institutions. The central character of his documentary is Jeanette Maier, who for 26 years ran a New Orleans brothel with her mother and daughter until the FBI raided it in October 2001. The particulars of the brothel business, as well as the intricacies of the trial, are downplayed in favor of more personal approach to Maier’s character. Despite the lurid bravura of its title, The Canal Street Madam succeeds in reaching beyond this woman’s sensational backstory. Maier comes off more like a working-class single mom that a great many people (regardless of their day jobs) can relate to.

Yates follows Maier as she struggles to deal with the aftermath of the bust: rebuilding her life, coping with the press, finding a new career, and reconnecting with her children (who have been in and out of jail for various charges). Among the more affecting moments in the film is one in which Maier tries to shake some sense into one of her sons who, in a drug-induced haze, can’t stop shaking and is barely conscious. As she chastises him about his drug test coming up the following day, we see that, for better or worse, she is still trying to be the supportive backbone of her family, a sentiment that is echoed by both of her sons. And while the film is sympathetic to Maier, it is not blindly so. Maier’s children (now grown adults) reveal that, from a young age, they were well aware of the constant trafficking of sex and drugs through their home. Such details may strip away the martyrdom from Maier, but they do not turn us against her. 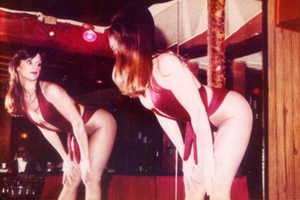 Some viewers might be frustrated by the lack of trial details (such as the lingering question as to why the names of the clientele were never released), or the absence of any of the brothel’s workers (other than Maier, and her mother and daughter). However, these paths would have led to very different films that would have each been problematic in their own ways. The “character-driven doc” model is perfectly suited to the film’s goals. Yates isn’t interested in defining Maier through pre-existing cultural stereotypes (a daunting challenge considering the never-ending topicality of prostitution), nor does he use Maier as a “vehicle” for a message or a “lens” for looking at society. Embedded within what is undoubtedly a personal story is a complicated and nuanced cultural discourse about sex, politics, and gender identity. Particularly in the film’s final third, Maier begins to vocalize her own views about the decriminalization of prostitution (and the unjust legal system that too-often targets the female workers and lets the male clients go unnamed) through both television news and public appearances. When a New York audience greets her with cheers of “Tits” and “How many abortions,” we realize the struggle that both Maier and Yates are up against in trying to discuss sexuality in a political way in a society that, at times, seems as confused on the subject as a pubescent fourteen-year-old.

Maier’s resilient spirit and candid personality make her a lively character for a documentary, but it is her trusting rapport with Yates that further elevates The Canal Street Madam. They share moments not only of great sensitivity, but also warmth and humor (a favorite scene is behind-the-scenes glimpse at Maier finalizing her adult spoken-word CD). When Maier opens up about the sexual abuse she suffered as a child, Yates smartly avoids the knee-jerk reaction to bring in a psychologist in order to rationalize Maier’s later decision to enter the sex industry. Instead, his editorial and directorial silence says a great deal about the respect he feels for his subject. By letting her words stand alone, Maier doesn’t come off as a “case study’ or “subject” but as a three-dimensional human being—a complex one with both flaws and assets, but ultimately a real person who transcends even the label of “Canal Street Madam,” the label that she has given herself.