PLEASE VOTE FOR ME

(Please Vote For Me is now available on DVD through First Run Features. Buy it at Amazon

After a second viewing of Weijun Chen’s remarkable 58-minute documentary, my take on it has changed completely. The first time around, I was struck by the uncomfortable similarities between the film’s grade school election and our nation’s current presidential race. I planned to focus my review on how the film stood as a brilliant example of how even the most civil democratic election eventually devolves into cheap muckraking. But after having watched it again, a stronger reaction has emerged. In reality, Please Vote For Me is about something infinitely more disturbing: parental influence run horribly amuck. The negative tactics employed by these three eight-year-old Chinese grade school students—who have never been involved in a contest of this sort nor been in a situation remotely similar to this one—are at times eerily reminiscent of the ones wielded by our very own presidential candidates. Yet what makes these actions so distressing is that, this time around, the parents are the direct cause of this cruel behavior. One doesn’t need to take a history course to understand why these parents are the way they are, and while I could focus on that, I would rather concentrate on the more immediate matter of childhood innocence being tarnished.

The place is Wuhan, Central China. To teach her young students the basic principles of democracy, Mrs. Zhang has picked three students to compete for the coveted role of class monitor. Only this time around, they get to choose their monitor. At first, the children are unable to grasp this concept. Having been raised in a country where just about every decision is predetermined (I assume you watched at least some of the Beijing Olympics), the thought of winning a competition based on the free will of fellow students seems an entirely foreign, and not altogether pleasant, concept. The nominees appear to be the most skeptical. Incumbent hall monitor Luo Lei unknowingly expresses the beauty of democracy in its most basic form when he says to his parents, “People should vote for whomever they want.” Xu Xiaofei is shy and timid. Her initial skepticism reflects a wisdom that she couldn’t possibly grasp at this early stage; it’s as if she knows how messy things are going to get and she’d rather not suffer the emotional consequences. Cheng Cheng is clearly excited by the attention, but he would also rather be watching television and relaxing than putting in the work necessary to win the favor of his classmates.

Which leads to the parents, who put their kids through a training regiment that feels like full-on boot camp. Everything about this situation provides a fascinating window into Chinese culture: the militaristic declarations of patriotism at school, the unflinching learning process of recite-repeat-recite-repeat, and, most blatantly, the parental pressure to win at all costs. We have seen this parental pressure exerted in the United States—we are, after all, land of the Pageant Mom!—but that is a rare specimen of monster. In the cultural setting of Please Vote For Me—especially with regards to how it’s presented in this film—this harsh, misguided level of parenting feels far more ingrained and common. 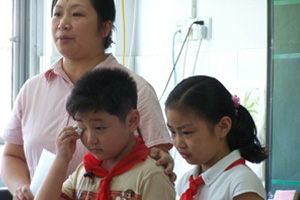 When pushed by their parents, the children react: Luo Lei with confusion, as if he doesn’t understand why his mother is taking everything so seriously; Cheng Cheng, with anger at his mother for suggesting ideas that he dislikes (such as using his hands in his singing performance); Xu Xiaofai, when prodded by her equally timid single mother, with an endless flood of tears. It is quite obvious that these children don’t feel comfortable in this situation, yet it’s out of their hands and it’s only getting worse. Looked at in this way, the film isn’t an indictment of democratic competition at its most cutthroat; it’s an indictment of pushy parents who have been programmed to resort to such conniving, foul tactics.

As the campaign unfolds, it becomes even clearer that the children are merely puppets in this cruel social experiment, for it is the parents who are pulling the strings. From the beginning, Cheng Cheng’s mother and father pressure him to spot his opponents’ weaknesses and exploit them to his benefit, going so far as to suggest he boo their talent show performances. When Luo Lei expresses his desire to quit the race, his parents arrange a class trip on the monorail as a bribe tactic (they later resort to this technique again, giving him gifts to present to every student after his final speech). For a while, it appears that Xiaofei and her mother are exempt from these negative tactics, but that thought is tossed out the window when her mother suggests drawing up a list of her opponents’ faults, to be used against them if and when they attack her. And when Luo Lei and Cheng Cheng learn of her plan, they recognize its cleverness and adopt it for themselves. That night, Cheng Cheng informs his mother that he is going to make a list of wrongdoing and inferiority in each of his opponents, and she reacts as if he’s reached a new level of maturity.

It would be interesting if Chen were to make another version of this film set in a similar school in China, in which the parents weren’t allowed to influence their children. For in this situation, it’s impossible to ignore their prodding hands, hands that have been shaped by the forceful authority of their controlling government. If one watches the film through one set of eyes, it might actually be seen as pro-Chinese propaganda (public elections are messy and make children cry!). But to me, it shows the negative impact of generations of governmental oppression, an oppression that would lead a parent to drive his child to make an eight-year-old cry.