NO CROSSOVER: THE TRIAL OF ALLEN IVERSON

(After a successful festival run, No Crossover: The Trial of Allen Iverson premieres on ESPN at 8pm on Tuesday, April 13, 2010. Visit the film’s page at the 30 For 30 website for the full screening calendar.)

Now we’re talking. I know they can’t all be great, but Steve James’s No Crossover: The Trial of Allen Iverson is the exact type of film I had hoped to encounter more often than not when dealing with ESPN’s 30 For 30 documentary series. James fuses his knack for both third person (Hoop Dreams) and first person (Stevie) storytelling to confront this massively sensitive subject matter. As one wise interviewee states near the end of the film, race in America is just like a duck floating along the water: above the surface, it’s all smooth gliding, but just beneath, its legs are flapping and flailing away.

James is the perfect person to tell this story, and not just because he directed what is widely considered to be the greatest sports film of all time (no, not Prefontaine). Born and bred in Hampton, Virginia, James grew up playing basketball for Hampton High. But even after he left town, his sports obsessed father kept him updated on the area’s best talents. When it came to Allen Iverson, James’s dad wasn’t the only one who believed Iverson was the best high school basketball player his community had ever seen (he played for Hampton’s rival Bethel High). Small in height and stature, Iverson nonetheless dominated his opponents. He could shoot three pointers, drive into the lane and hit pull-up jumpers, finish thunderous alley-oops, and, most memorably, he had a crossover dribble that could break an opponent’s ankles (don’t worry, James includes the moment when Iverson juked out Michael Jordan and left him looking like a chump). Most importantly, he had a ferocious inner burn and determination that gave him a further edge over everyone else. 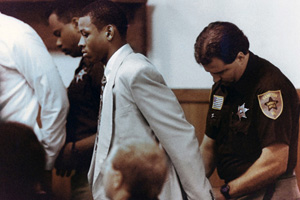 On February 14, 1993, everything changed for both this relatively quiet community and this extraordinarily gifted young man. At a bowling alley, hours after yet another victory, Iverson and several black friends found themselves in a brawl with a group of white kids. During the melee, chairs became weapons, and when a white teenage girl was hit in the head and knocked unconscious, Iverson was accused of having committed that shocking crime. Though shaky video footage exists of the fight, nothing concrete could—or still can—be established with regards to Iverson’s actual involvement, yet he and three friends were tried as adults (say huh?) and convicted. Though he was eventually released from prison and went on to play college ball for the Georgetown Hoyas and become an NBA star for the Philadelphia 76ers, this controversial incident continues to haunt not just Iverson, but his hometown. Fifteen years later, armed with a camera, James returned to Hampton to work things out for himself.

As James speaks with individuals from all walks of life, each of whom has their own personal insight into that volatile chapter in Hampton’s history, layers of skin are peeled off. Yet instead of revealing the pleasant fact that we all bleed the same blood, a far more complicated and unavoidable truth emerges: in certain situations, all the rationality and colorblindness in the world are no match for the passions stirred by race. Sometimes, as much as we don’t want to be wearing those goggles, things just become an unavoidable showdown between black and white.

What makes this particular case so fascinating and complicated is that we’ll never have a definitive answer as to Iverson’s actual guilt. The gray answer is that even if Iverson didn’t throw that chair—which not many people think he did, for whatever that’s worth, and which he himself has convincingly denied—he was certainly not the type to back down from a fight. But as James shows us, when such thick walls are set up by those on both sides of the divide, it’s impossible to land anywhere in the middle. You’re forced to pick a side, even if you don’t want to.

No Crossover: The Trial of Allen Iverson holds up an honest mirror to our faces, and what it ultimately determines isn’t pretty. When it comes to race in America, there simply is no easy answer. What’s worse, there doesn’t seem to be a solution in sight. As an act of personal sports journalism, this is a very good film. As an expose on race relations, it’s a great one.