(Family Affair world premieres in the US Documentary Competition at the 2010 Sundance Film Festival. It first screens on Friday, January 22nd, but has several more screenings throughout the week. Check the Sundance website for specific screening information, and be sure to visit the film’s official website to learn more.)

On the surface, those of us who have never had to suffer severe abuse at the hands of a parent, be it verbal, physical or sexual, do not necessarily look (or act) any differently from those children who have. As childhood and teenage photos of what appear to be three happy, well adjusted, doted upon, beautiful girls floats across the screen in Chico Colvard’s feature documentary debut, Family Affair (world premiering in the Sundance US Documentary Competition), the insidious nature of how deep and well-hidden a family’s dark secrets can go becomes almost too much to bear. 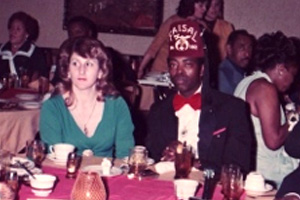 For Colvard, the beginning of exposing his own family’s dark secrets started, unwittingly, innocently, as a little boy. In the kitchen of their home in Radcliff, Kentucky in 1978, he accidentally shot one of his sisters, tempted to pick up one of his father’s guns and, unfortunately, finding some bullets after watching his hero on television, The Rifleman. This explosion of violence shattered the family: father arrested and sent to prison after Pauline (Paula), believing she was going to die, tells their mother what is going on; all four children separated and scattered to different relatives’ homes; mother having to face the fact that the man physically and verbally abusing her was also having “affairs” with all three of their daughters. When the father (a black man raised in the segregated South, also an abused child, and on his own since 13 years of age) leaves prison after serving less than a year, the daughters run back to him, loyally, willingly, continuing to see him and have relations with him. The mother (a white German Jewish woman) then flees, abandoning the family entirely, profoundly betrayed by her own daughters. They never see her again. A story of Shakespearean proportions.

Fifteen years later, Colvard, who has not spoken to, or seen his father in that time, goes to Thanksgiving at one of his sister’s houses, only to confront, not the demon in the flesh he expected to find, but a pretty normal family holiday scene, one just like any other in millions of households across the country—laughter, teasing, hugs and kisses, family photos, a celebratory communal meal. Staggered by the “normalcy” of his sisters’ relationships with their father, he sets out to try and figure out, and reveal, the many complexities that reside within an abusive parent-child relationship.

Family Affair is a straightforward, but intense, investigation as to why, to this day, “There are certain things we don’t talk about,” despite childhoods that were irrevocably damaging, where “no help came for so long,” no rescue in sight. These girls—Angelika (Angie), Chiquita (Chici) and Pauline (Paula)—fully adapted themselves to the situation—so much so that they continued relations with their father even after they were grown and could, ostensibly, defend themselves. Angie, pregnant for the first time at 14 by her father, says she prayed for someone to “give her a way out” from the ages of five to thirteen. But she acknowledges unequivocally that after that point, she became “the girlfriend, the wife, the seductress.” And Chici tells an unsettled Colvard, “I enjoyed sex with my father.” 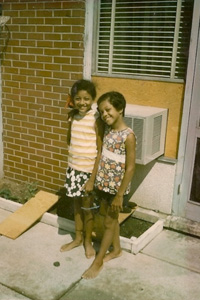 What this filmmaker does so simply and generously, and what makes the piece so emotionally resonant and rich, is he hands the reins of the story over to his sisters and they tell him, in astoundingly open ways, what it was like for them when they were girls. Throughout, they offer unapologetic, non-histrionic, sometimes humorous testimony, straightforward talk from the mouths and hearts of three exceedingly strong women, all of whom still suffer the ramifications of the intense abuse they experienced at the hands of their father. Touchingly, they also share and articulate the ways in which they worry about heredity when they talk about their fears and insecurities about raising their own children. It is riveting and painful and Colvard meets his own feelings of inadequacy with an unrelenting and deliberate journey into the most complex parts of who we are as parents, children, and siblings.

There are never pat answers or neat resolutions on offer, although he does go see his mother after eighteen years and walks away better understanding her side of things, as do we. She is a woman who, with the help of a new husband and her steadfast faith, has moved on, forgiven. But not forgotten. There is no tearful family reunion; there is no contrived circle of love and healing at the end of the film; there is no simplistic redressing of the morass of plain wrongness that has transpired between this parent and his female children. There is just moving on, living, dealing. Some might say there are massive amounts of denial on display. This viewer thought there was very little of that, actually.

Except for a haunting and beautiful score by composer Miriam Cutler, and a few artfully done recreations of certain memories the girls describe, the film is pared-down, gritty, never devolving into anything slick or overly produced. And except for one brief visit with Colvard to a doctor who specializes in treating victims of long-term incest (and I have a feeling this was something that was imposed in the interests of marking this as an “issue” film), the documenting of this story, the collaboration inherent in the telling of it, with everything in plain sight, is its strongest aspect, its healing force, a sort of gift that Colvard bestows on the three sisters who, in turn, share with him the utter hell that has been their lives, telling their story with dignity, grace, humor, refusing, at least on the outside, to live as life-long victims of a childhood probably very few of us would have survived intact.

What kind of public reception this film will have, how it might affect the way families and therapists talk about these things in the future, is really up for grabs. I took it in as an incredibly moving testimony to the power of human resilience and an example of the child-like faith that can enable us to move beyond the worst of what can happen to us when we’re vulnerable and small and at the mercy of the custodians that cross our paths. Or live under the same roof with us.