(The 10th anniversary edition of Dark Days is now available on DVD. It was re-released theatrically at Cinema Village by Oscilloscope Laboratories on Friday, July 1, 2011. NOTE: This review was first published on June 30, 2011, as a “Hammer to Nail Pick of the Week” at the Filmmaker Magazine blog.)

Things keep happening that make me feel old. No, I don’t have any major age-related illnesses. I haven’t been getting copies of AARP magazine in the mail. “Are you even 30 yet?” is still a legitimate question to ask me upon any encounter. For the record, I’m not (yet) 30, but still I can’t help getting the creeping sense that, in the words of LCD Soundsystem, “I’m losing my edge.” Upon learning that the Cinema Village was going to open British documentarian Marc Singer’s seminal 2000 documentary Dark Days for a week-long run to mark its 10th anniversary DVD reissue, this creeping feeling of age’s unceasing forward progression returned. Not that Dark Days was particularly important to me as a film, although I spent a fair amount of time watching it—in theaters, on DVDs, on the Sundance Channel. For me it serves as a reminder of a bygone era in independent film and my relationship to it, one that I’m still nostalgic for despite my best efforts to live without sentimentality (like many of my pursuits, I’m proving to be a bigger failure than I had imagined).

A penetrating look at the bowels of New York made over two-and-a-half years, Dark Days profiles a number of the city’s homeless who have taken to living in small communities within abandoned sections of the MTA subway system. A Brit who was fascinated by the number of homeless in New York, Singer camped out in the Freedom Tunnel, which runs roughly from Penn Station to Harlem on the West Side, with dozens of homeless for several months before he decided to make Dark Days. The trust and intimacy he had gained in that time is evident in nearly every frame. These are decent, thoughtful if somewhat unlucky individuals who had taken to living underneath Manhattan. 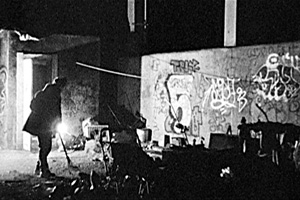 Shot in grainy, black-and-white, partially damaged Kodak 16mm by the director himself, a non-filmmaker who saw the project as a way to shed light on the plight these individuals faced so as to possibly improve their conditions, the film doesn’t feel like a work of advocacy. Furthermore, it has an aesthetic vibe to it that has largely disappeared from documentaries as digital production has become ubiquitous due to the high shooting ratios involved in the genre. Singer composes and lights his frames very carefully and allows the hollowed-out stillness of the tunnels to suggest the emptiness of many of the lives he depicts. Dolly rigs and lighting set-ups were accomplished with the help of the subjects themselves. The film may be most remembered in some circles for the score by famed trip-hop impresario DJ Shadow (he was a very hot commodity at the time, in the period between Entroducing… and The Private Press), with its groundbreaking slow cadences and unabashed frankness.

Revisiting it now on DVD, the film plays as hauntingly fresh as it did when I caught it at Cincinnati’s Esquire Theatre a decade ago, one early spring afternoon while playing hooky from high school, a couple months after I fell very ill and had been convinced by my grave condition that John Waters’ Cecil B Demented was the last film I’d ever see in a movie theatre. Maybe it was because of the DJ Shadow tunes or maybe because it didn’t feel like a capital D Documentary, but there was a time when Dark Days was just about the only documentary I could get my friends to watch with anything resembling enthusiasm. I was a young cinephile whose main interest, beyond girls, socialism, baseball and bud, was shocking people with strange films they’d never heard of and would probably never see unless they were in my presence. I was full of hope that I could persuade people to stomach something cinematic that unsettled them, that took them out of their comfort zones. In its own way, Dark Days showed me that non-conventional cinema, borne out of a genuine desire to make a difference, could be socially significant, viable as a life pursuit and, for lack of a better term, undeniably cool. With the new 10th anniversary disc out from Oscilloscope, maybe some other young twerp will be similarly enthralled.

SEE YOU NEXT TUESDAY

A Conversation With Drew Tobia (SEE YOU NEXT TUESDAY)