Documentary
In Theatres
On DVD
Thriller

(Burma VJ: Reporting From a Closed Country is being distributed by Oscilloscope Pictures. It opens at the Film Forum on Wednesday, May 20th, before expanding in the coming weeks and months. Visit the film’s official website to watch a trailer and learn more.)

By now, you probably know what you’re getting into with Anders Ostergaard’s Burma VJ: Reporting From a Closed Country. Or maybe not. Over the past several months, I’ve found that whenever someone asks me what is the best documentary I’ve seen in 2009 and I suggest Burma VJ, they respond the way I did when I first heard the title after it made a big splash at IDFA: I thought it was the story of a monk rapper using hip-hop to preach his message of peace and tranquility unto the world. Had I been the only one to think this, I would have wisely kept that misinterpretation to myself. But seeing how others continue to have the same problem, I felt compelled to acknowledge it. To remove any confusion, let me make state this very clearly: Burma VJ is a groundbreaking, pulse-pounding political thriller, which makes the most effective and intense Hollywood effort look like a glossy, artificial diversion.

In the fall of 2007, almost twenty years since their last attempted uprising, the citizens of Burma (officially known as Myanmar) once again became fed up with their crushingly oppressive government. Conquering their well-founded fears of the military regime that has crippled them for over forty years, these brave individuals banded together and took to the streets to protest the Burmese Junta’s inhumane, silencing tactics. In a gesture of solidarity, thousands of monks joined in this protest, marching in Rangoon and beyond to show their support for the people (as monks typically abstain from getting involved in politics, this act became even more symbolic and inspiring). Of course, this only riled up the government even further, resulting in violent behavior toward not just citizens, but also—to everyone’s stunned dismay—the monks themselves. The fact that the Junta also practiced extreme censorship—blocking the internet, not allowing foreign press to enter the country, not letting citizens come-and-go—pretty much ensured that this story would never be fairly reported. Or would it?

It’s one thing to hear about oppression. It’s another to see it. And it is in this latter distinction where Burma VJ becomes more than just a nerve-wracking thriller and elevates itself a genuinely groundbreaking piece of cinematic history. The Democratic Voice of Burma is a small collective of underground video journalists who risk their lives to capture the world from an on-the-ground, behind-the-walls perspective. When the uprising began, the VJs sensed something big was about to happen and they responded by taking their cameras to the streets. This footage was smuggled out of the country by dangerous late night satellite uploads to “Joshua,” a fellow VJ who had fled to Norway to help organize his troops and deliver the footage to the rest of the world. 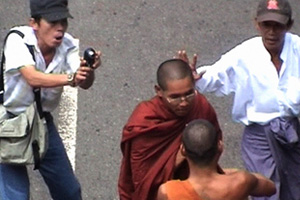 In recounting this profound event with the most immediacy possible, Ostergaard centers his story around Joshua, recreating his moments of contact with the VJs as we experience the uprising through their cameras’ shaking, harrowing lenses. Many scenes begin with a black image and a muffled, scratching sound, as the reporters remove the layering that has been keeping their cameras hidden. This never feels like a cheap tactic to add tension, yet it does just that. Every time the screen cuts to black and we hear this sound, one can’t help but tighten up. As the situation escalated, my armpits became sopping wet puddles.

While the VJs do manage to capture the confrontations and subsequent deaths with startling immediacy, I found the most stirring imagery to be that of witnesses to the parade, applauding from apartment buildings and sidewalks. The Burmese people have been oppressed for so long that they couldn’t possibly rise up in protest the way we might expect them to. They have been bludgeoned into timidity. For these frightened citizens to stand in public and applaud the marching of these monks and protesters was as brave and defiant an act as marching themselves. The best writer in the world couldn’t convey the true power of this gesture. Which is why the DVB’s heroic actions, and Burma VJ, have proven just how invaluable a tool technology can be in giving voice to the oppressed. Without the internet and hand-held consumer video cameras, this historic moment would have never have been reported with such visceral force; this film would never have been made.

I am all for the hybridization of fiction and nonfiction, but I tend to find recreations in documentaries distracting—especially when placed alongside actual documentary footage (even something as immaculately executed as Man on Wire). In the case of Burma VJ, however, I confess to being duped by the presentation. I never once gave it a thought that these exchanges between Joshua and his reporters were recreations. While this is most likely a credit to Ostergaard’s direction, it also has to do with the story itself, which is driven by such a genuine life-or-death energy that I didn’t have time to think critically. I was too caught up in the moment, too frightened by what might happen next. Burma VJ is one of the most vital films of this young century.