(A Film Unfinished is now available on DVD. It opened in New York City on Wednesday, August 18, 2010, at the Film Forum and Lincoln Plaza Cinema. To find out when it’s opening in your town, visit the film’s page at Oscilloscope Pictures.)

Pardon my callousness, but I wasn’t that enthused about watching Yael Hersonski’s A Film Unfinished, even though I’d heard nothing but positive things about it. Not because I’m too sensitive about the horrors inflicted upon the Jewish people by Hitler and Nazi Germany, and certainly not because I’m an anti-Semite. My problem is that as a film lover/watcher/reviewer, I’ve become pummeled into numbness by what I (don’t) like to refer to as the Holocaust Documentary Industry. It’s gotten so bad that whenever I hear about a new Holocaust doc, I cringe and head in the other direction. I was raised Catholic and thus have my own special guilt sauce streaming through my bloodstream, so while I genuinely don’t feel good about this newly cemented personal aversion, the constant barrage of Holocaust docs has left me no other option. Which is a long-winded, awkward way of saying that 1) I am glad that I saw A Film Unfinished, and 2) I am here to highly recommend it. It’s a thoughtful, at times sickeningly effective essay that manages to bring something new to the discussion. Hersonski shows us yet another, perhaps even more disturbing, side of Nazi evil in the form of a propaganda machine that planned to use the power of cinema to further deceive the world. 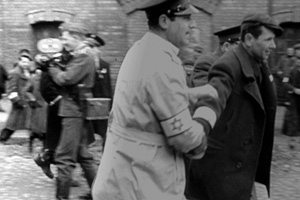 Hersonski’s coup was getting her hands on the one remaining copy of an unfinished 60-minute Nazi propaganda film—labeled Ghetto on the canisters in which it sat—that had somehow never seen the light of day up until this point. What makes this film so disgusting isn’t the horrific footage of bone-thin bodies being tossed into mass graves (though that will make many of you cover your eyes). It’s the fictional film that the Nazis were creating, staging scenes in which wealthier Jews appeared to be living the high life in the Warsaw Ghetto in May 1942. As Hersonski walks us through this footage, she doesn’t just interview survivors of this nightmare to share their side of the story. She also points her lens at those on the other side, including one of the few cameramen who explains what his orders were and why he did what he did (answer: he was ordered).

While the cumulative impact of all of this is what you’d expect—don’t go rushing out to the comedy club right afterward (or maybe that’s exactly what you should do?)—Hersonski never wallows in her material. She takes a removed, analytical approach. Even when she does the inevitable and screens the footage from Ghetto for each of these survivors, capturing their naked reactions, to be completely honest, I was thankful for the cutaways from the atrocities unfolding on the screen within the screen.

One thing that did confuse me mightily with regards to A Film Unfinished is that throughout, the cameraman says multiple times that he had no idea the Jews were about to be systemically murdered in the coming months and years. My question, watching this footage that he himself shot, was a rather loud one, as in weren’t they already being systematically murdered right there in front of his face? Maybe the term ‘systematic’ differentiates it, but when you’re shooting footage of bodies upon bodies being dumped into large graves, that seems ‘systematic’ enough to me. Or am I missing something here?

Many months ago, I stated that I’d be shocked if Connie Field’s Have You Heard From Johannesburg? didn’t take home the Best Documentary Oscar in 2011. While the running joke from pretty much everyone I know is that whenever and wherever a Holocaust film is nominated for an award, put your money down for that one. And while my personal vote still goes to Have You Heard From Johannesburg?, I wouldn’t be disappointed if Hersonski wins for this sobering and vital crusher.