(Diamond on Vinyl has its World Premiere at the 2013 Slamdance Film Festival. Visit the film’s official website to learn more.)

Past, present and future tenses shift and slip, overlapping in a series of strange configurations in J.R. Hughto’s conceptually brilliant and emotionally intense story of Henry (Brian McGuire), a man compelled to rehearse his own life experiences and surreptitiously record others—to the point of jeopardizing his relationship—as he strives for an abstract idea of happiness.

Henry and his girlfriend Beth (Nina Millin) check into a hotel to share champagne and a romantic evening after getting engaged. In the morning Beth discovers a recording device with audio of them having sex, as well as Henry’s rehearsed declaration of what sounds like something less than love. Devastated, Beth tells Henry to move out of their home, and has an emotional breakdown in her car. A young woman, Charlie (Sonja Kinski), happens to see her and offers her a tissue to cry into, and Beth asks her to return a hotel key to Henry. Charlie quickly becomes fascinated with Henry and his interest in recording, and eagerly offers to do some scenes with him.

The cast is across-the-board excellent, and Kinski’s performance in particular is a thing to behold, internal struggles and sudden intuitions ebbing and flowing across her being. Charlie is an oblique character, soft-spoken and skittish but driven to adventure. Initially she’s pretty direct about pursuing Henry romantically, but her real motivation is not that simple; on some level she’s drawn to Beth too. Beth is at first glance the most grounded of the characters, forcefully promoting her desire for a child and a family, but there’s a suggestion that she’s a workaholic, and her efforts to pin Henry down indicate an inability to fully understand or accept who he is. The sound design feeds into the theme of identity displacement, with Charlie’s voice sometimes dubbing Beth’s, and vice-versa. 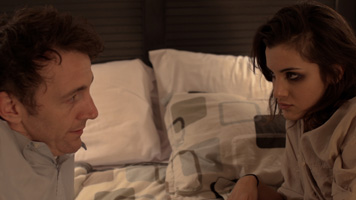 Henry’s appeal is his drive and passion, although he seems confused, or at least misguided, about what exactly he’s trying to achieve. When Charlie asks him why he makes recordings he says, “I see myself outside of my place, standing there at the door, and I hear myself inside, happy.” He idealizes a series of old spoken-word record albums called “Safe and Sound,” featuring lively conversation between a husband and wife, and designed to be played when you leave the house so would-be-prowlers will think someone’s home. These records are the template for his own recordings.

Hughto’s wonderfully complex puzzle has a sharp narrative construction. He threads patterns of rehearsed and repeated dialogue throughout the script; you’re never sure what’s being said spontaneously. The increasingly intimate interactions between the three characters are concentric circles moving toward a full implosion.

Hughto’s story goes to the heart of a lot of specifically contemporary concerns—on one level it comments on our obsession with documentation (Charlie is, appropriately, a photographer): Henry’s compulsion is like taking to an extreme the practice of holding up a smart phone to record video at a concert instead of just having the experience. Diamond On Vinyl also comments on the irony of retro culture—the fetishization of relics from the past that have little meaning to the people that created them. These themes rub together sparking insights and suggesting discourse; the characters are emblematic of a fundamental malaise—an inability to live in the here-and-now and to know and be themselves.