(We here at Hammer to Nail are all about true independent cinema. But we also have to tip our hat to the great films of yesteryear that continue to inspire filmmakers and cinephiles alike. This week, our “The Curbside Criterion” continues where HtN staff can trot out thoughts on the finest films ever made. Today Brad Cook gets zany with the new Criterion Blu-Ray release of Terry Gilliam’s directorial debut Jabberwocky. )

As debut directorial efforts go, Jabberwocky isn’t a bad film. It’s an enjoyable romp, and it sets the stage for many of Terry Gilliam’s later tropes, such as dirty, dusty environments far removed from sanitized Hollywood visions and the everyman who longs for a different life and gets more than he bargained for.

In this case, said everyman is Dennis Cooper (Michael Palin), who has a head for business, much to the chagrin of his barrel-making father, who, as the Steve Jobs of barrel-makers in his day, cares much more about fine craftsmanship. Dennis also longs for the hand of his neighbor Griselda in marriage, but she has no interest in him, despite the fact that her slovenly behavior likely limits her available suitors.

Meanwhile, a monster (the Jabberwock, which comes from Lewis Carroll‘s “Jabberwocky” poem) menaces the countryside, and the king is unsure what to do about that, although he is able to act decisively when a member of his court irritates him. After Dennis is disowned by his dying father, he decides to make his way to the city and look for business opportunities there, only to be rebuffed by the guards. Through a series of comedic events, Dennis ends up the squire of a tournament-winning knight who is sent to kill the monster in exchange for half the kingdom and the hand of the princess in marriage.

Palin plays his role with aplomb, giving us a Dennis who is sure he can figure out a way to make a mark for himself, such as when he gives an innkeeper advice on how to pour beer more efficiently. Unfortunately, he can’t seem to stay out of trouble, and his longing for Griselda is odd, considering that when he stumbles into the room of the princess, she fawns over him. Gilliam references this in one of the bonus features, noting that he finds it funny that Dennis makes such a choice, but it seems strange, especially since the movie goes more for black humor in a Brazil vein than over-the-top silliness, like in Monty Python and the Holy Grail, which Gilliam co-directed. 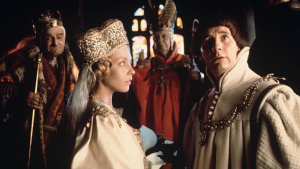 That unsure sense of tone is what causes Jabberwocky to stumble a bit as the tale unfolds. There are Python-esque moments where Gilliam goes for the kind of social commentary the group was famous for, such as the scene where a couple rich lords discuss commodities as if they’re modern day Wall Street brokers, but those are few and far between. The jokes tend to be more of the black humor variety, ones that make social comments in a more grim way, and as a result, the film feels a bit schizophrenic.

One area I found admirable was Gilliam’s depiction of the Middle Ages as it really was: dirty and gross. People poop out windows and pee off castle walls, many of them have awful teeth, and pieces of the ceiling crumble in clouds of dust as the king speaks. Hollywood tends to show the Middle Ages as if they were straight out of a ren fair, and the reality is that those centuries would have caused even people with moderate neatness compulsions to have nervous breakdowns.

For this Blu-ray release, Criterion included a new 4K restoration that was approved by Gilliam, with a 5.1 surround DTS-HD Master Audio sound mix supervised by him too. The following new bonus features were included as well:

The rest of the bonus features include: