THE CURBSIDE CRITERION: LINKLATER’S “BEFORE” TRILOGY

(We here at Hammer to Nail are all about true independent cinema. But we also have to tip our hat to the great films of yesteryear that continue to inspire filmmakers and cinephiles alike. This week, our “The Curbside Criterion” continues where HtN staff can trot out thoughts on the finest films ever made. Today Brad Cook explores the new Blu-Ray release of  Richard Linklater’s indispensable “Before Trilogy.”)

Richard Linklater’s Boyhood (I reviewed the Criterion edition last December) was an epic tale of childhood that the director filmed over a 12-year period, which was, as far as I know, an unprecedented feat. However, you could make the argument that his Before trilogy, which he made over the course of nearly two decades, is just as impressive a feat.

Where Boyhood charted the arc of a kid who bounced around middle class strata before heading off to college to fulfill his destiny, the three Before movies follow the course of an adult relationship that begins with idealistic young love and ends with the couple at a crossroads. Whether or not Jesse (Ethan Hawke) and Céline (Julie Delpy) will stay together isn’t the point – their goal, if you will, is to reach common ground on which they can build further discussion of their relationship.

If that’s at odds with what you want out of movies, then I suppose you’re not in Linklater’s target demo, as they say. I’m a middle-aged guy with a family who has been married for nearly 20 years, so the Before movies hit me between the eyes.

Even though young, idealistic love has long since receded in my rearview mirror, I can still appreciate the thrill the two main characters feel as they initiate a romance in Before Sunrise. I understand the “it’s complicated” nature of Before Sunset, as Jesse and Céline reconnect and see if the passage of time has dulled how they feel about each other. And I know what the pair are going through as they wrestle with the notion of idealistic love versus messy reality in Before Midnight. 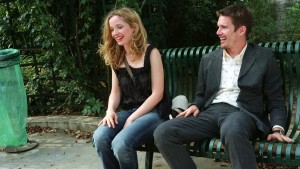 If you’re a fan of these films too, you’ll appreciate the care that Criterion put into this three-disc Blu-ray release. In addition to restored 2K transfers of the movies, the discs offer a nice complement of bonus features:

The obligatory booklet, with an essay by film critic Dennis Lim, is included too.