(This essay was first published in the insert of Factory 25’s home video release of MAKE-OUT with VIOLENCE—which is available on DVD, Blu-ray, and limited edition LP/DVD. Craig Zobel directed Great World of Sound, co-produced David Gordon Green’s George Washington, and is the co-founder of the cartoon website Homestar Runner.)

Wendy Hearst is dead. Her friends are finally being forced to accept this fact. No one quite knows what happened. She just disappeared one day and was never found. It’s the early days of summer just after senior year, and Wendy’s family has decided to hold a ceremony—an empty casket burial—in an attempt to bring closure to the upscale suburban community. Through this background, we are allowed to observe a group of close friends navigating their first big loss in the Deagol Brothers’ MAKE-OUT with VIOLENCE.

The film has an incredibly unique tone. It starts as a sort of John Hughes film, a coming-of-age/end-of-high-school story. You know, the kind where we meet all the characters through a driving series of montages guided by an observant kid’s narration. And, just like John Hughes, it’s all handled with a confidence that makes you quick to forgive the fact that the actors playing teens might be a little old to play teens. 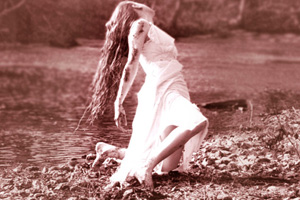 Then, at about twenty minutes in, it takes a left turn that rattles you. It turns into a zombie movie. Or, you want to call it a zombie movie, except there’s none of the running away as they chase after and screech “Brains!” nonsense. More accurately, it’s an animated corpse movie. See, Wendy Hearst has been found. And she’s a bit of a mess.

Still, the film sticks to its coming of age guns. Stumbling book-report style eulogies, lists written to navigate small talk on a phone call with a cute boy, really stupid inside-joke yearbook signatures. All the hits. It’s also a love story. I mean, two love stories: one more traditional and well observed, and one more unique.

There’s enough deadpan humor that you forget for a moment that this is a horror film—until the corpse moves again and scares the shit out of you. It takes place in an insulated, spooky suburbia that’s right out of a Romero flick: the world these kids live in has already passed away. And yet it’s all captured in a tone that has more in common with The Virgin Suicides than Dawn of the Dead.

When I first found this movie, I couldn’t stop thinking about it. I was impressed at its confidence, and jealous of how much fun they clearly had making it. I wanted to know as much as I could: How does Wendy move so crazily? (Answer: a modern dancer choreographed her movements.) Where’d they find the score? (Answer: the lead actors made it.) Was it always the intention to never explain how Wendy became a zombie? (Answer: Thankfully, yes.) How much did this thing cost?

Obnoxious question, I know. Totally doesn’t matter. But MAKE-OUT with VIOLENCE is a great movie made for a ridiculously small amount of money, by a group of close friends on the outskirts of Nashville. All of the leads are non-professional actors. All the special effects are practical. Stops and starts in production required three cinematographers—who are all geniuses, apparently. At one point, the team needed money to finish and started throwing rock show benefits in which they just played the entire soundtrack as a live band. This isn’t just an excellent segue to talk more about how awesome The Non-Commissioned Officers’ music is—but is also just a fucking cool way to finance a movie.

These guys didn’t ask permission. They just made a film they’d like to see, and now we get to watch it. They mix genres like a casserole, and they clearly have many more amazing films in them. From the first beautiful underwater shots to the inevitable fulfillment of the title’s promise, MOWV swings for the fences and knocks it out of the park. I’m glad the Deagols & company discovered this always-summertime-oh-maybe-there’s-a-zombie-over-there world. And I’m happy to know that I can visit it again and again whenever I want. I just hope I never have to ask any of them to babysit my pet rats.