In trying to verbally convey my reaction to Stephane Aubier and Vincent Patar’s A Town Called Panic, I now understand how babies must feel. Ga ga. Goo goo. Moo moo. Boo boo. I just took over twenty pictures of myself, hoping one might capture the punch-drunk expression I had on my face while watching this utterly zany romp, but I figured posting a .jpg of my face as opposed to words would be a rather silly and odd thing to do. So I guess I’ll try to do it the old-fashioned way.

If the meticulously precise stop-motion animation of Fantastic Mr. Fox is a hyper-smart teenager, then the gleefully scrappy A Town Called Panic is its idiot savant little brother. For obvious reasons, I’ve never cut-and-pasted a film’s official synopsis into a review of mine, but so much for never. Here goes nothin’:

Cowboy and Indian’s plan to gift Horse with a homemade barbeque backfires when they accidentally buy 50 million bricks. Whoops! This sets off a perilously wacky chain of events as the trio travel to the center of the earth, trek across frozen tundra and discover a parallel underwater universe of pointy-headed (and dishonest!) creatures. 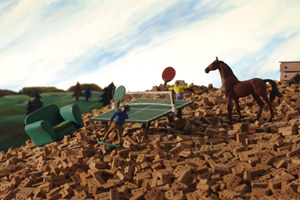 Let it be known that this description is completely literal. As in, “Cowboy” is indeed a cowboy, “Indian” is in fact an Indian, and “Horse” is a… you got it. They also happen to be plastic toy figurines whose dubbed voices make them sound like drunk Belgians tweaked out on helium and speed. Everything in this world is hand assembled, hand manipulated, hand constructed, a hodge-podge of animation techniques that results in something wholly unique. To top it all off, it’s executed with a reckless abandon that is more akin to how children play with their toys in their bedrooms when they’re alone, as opposed to “adult filmmakers” making a “legitimate” Cannes-ready film. Ga ga. Goo goo. Moo moo. Boo boo.

Normally, when I am smitten with a work of art/entertainment, I want to learn more about the creator(s), understanding the dynamics that led to its creation. But in this case, I don’t want to do that. I want to remain as ignorant as possible. Yes, I know that this movie was made by talented “grown-ups” who have also achieved success with these characters in a Belgian cult television series of the same name. But it’s more fun to watch A Town Called Panic and forget all that, to think that this is actually happening inside the brain of a precocious, lonely child. Or, even better, that this is what happens once all the humans have left the room. Take your kids, take your parents, take yourselves—this movie was made for all of us.