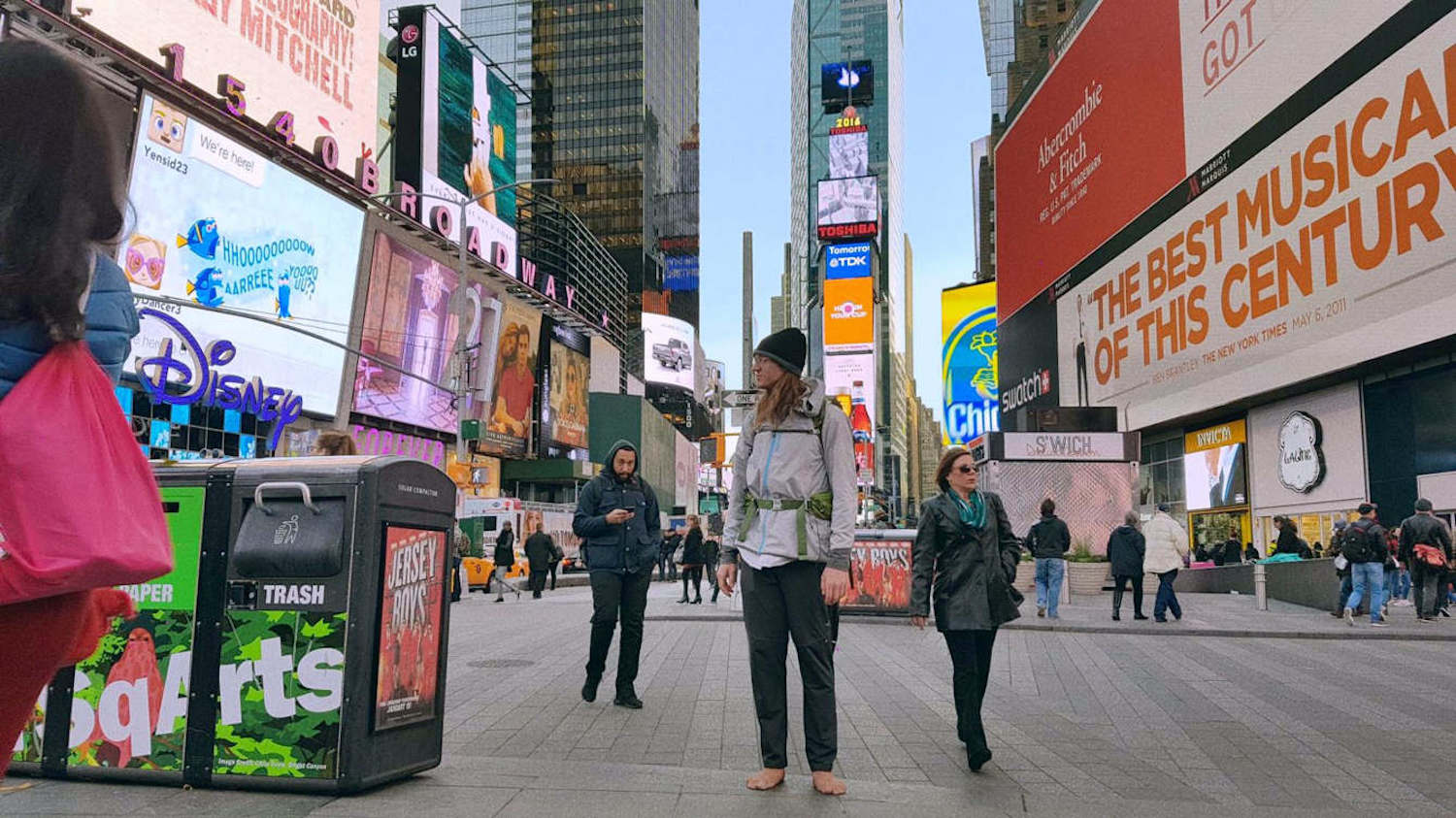 (Julie Sokolow’s documentary Barefoot: The Mark Baumer Story is available now on VOD via Animal Studios in conjunction with 1091 Pictures. Like what you see here on Hammer to Nail? Why not give just $1.00 per month via Patreon to help keep us going?)

On Saturday, January 21, 2017, a man from Providence, Rhode Island, was killed by a car in Florida while on the 100th day of a barefoot trek across the country. His name was Mark Baumer, and until that fateful accident he had been energetically documenting his expedition and the reasons for it, which were to both raise awareness for climate change and raise funds for the Fang Collective, an organization dedicated to direct action to save the planet. As a result, though Baumer has now been dead for over three years, he is brought to vivid life in Barefoot: The Mark Baumer Story, the new documentary from director Julie Sokolow (Woman on Fire), and emerges as an extremely compelling, as well as eccentric, central character. Given the vehemence of his beliefs, it is fitting that he should be the one whose voice we hear the most, guiding us on his idealistic, if star-crossed, odyssey.

Though he was alone on his walk, he is not alone here, however. Joining him to comment on the action are his mom and dad, girlfriend, members of FANG, and co-workers and friends. All feel passionately about the same environmental causes, and mourn the loss of the man they loved. He was a complex soul, who wrote poetry, worked at a Brown University library and followed no one’s path but his own. Indeed, if the film has a central theme, it is about how difficult it can be to live an unconventional life in our modern times. You just might die from it.

Though Sokolow does spend some time on the gruesome details of Baumer’s final day, that end defines neither the narrative nor her subject. For most of the movie’s not-quite-90-minutes, we are with Mark as he joyously photographs the different legs of his trip, a delight that turns sour when he laments the state of the Earth and the campaign (and then victory) of Donald Trump. This was the fall of 2016, after all, and that unexpected electoral outcome spelled disaster for all the climate policies of the Obama era (which, though nice, were in and of themselves hardly adequate to address our looming global catastrophe), and for so much more. We feel you, Mark, as you yell into your selfie-stick-mounted iPhone. Your diatribe is ours, too,

Beyond the politics of it, Barefoot: The Mark Baumer Story also reveals the remarkable spectacle of someone walking, well, barefoot in places (and temperatures) that defy practicality. He migrates from Rhode Island to New York City (now there’s a sight) to Ohio, where the approaching winter leads to ice, snow and the attendant salt on the road, forcing Baumer to change course, hop on a bus and start again down in Florida. Perhaps if he had started earlier in the year, this might not have happened. Then again, there are cars and distracted drivers everywhere.

Not every motorist proves a hazard, though; many stop to offer this clearly distressed man (so they think) some shoes (and food). No one really understands what he’s doing, viewing him as an idiot savant, at best. And he does have an infectious childlike wonder, so it’s not hard to see why. But back home, they get it, and his fundraising works (sadly, especially after his death). May we all have the strength of his convictions. Life is short; choose your personal journey well.