(Artificial Paradises world premiered at the 2011 International Film Festival Rotterdam before screening at the 2011 Tribeca Film Festival. It opens theatrically in New York City at the reRun Gastropub on Friday, March 30, 2012. Visit the film’s official website to learn more. NOTE: This review was first published on Thursday, March 29, 2012 as a “Hammer to Nail Pick of the Week” at the Filmmaker Magazine blog.)

Yes, Yulene Olaizola’s Artificial Paradises is about drug addiction. But not only does Olaizola take her time in revealing this agenda, her patient filmmaking and reverence for the gorgeous natural environment in which she shoots keeps that agenda from elbowing its way into the foreground. It’s this gentle approach that distinguishes Artificial Paradises from the rest of the “foreign-film-festival-circuit” pack. This is a minor film, but it resonates and lingers.

Set in the seemingly discarded coastal resort town of Jicacal, Mexico, Artificial Paradises opens with nearly seven minutes of dialogue-free establishing shots. This footage casts such a soothing spell that one would be forgiven for thinking they are settling into a nature relaxation video instead of a feature film. But soon, Olaizola introduces two main figures: Salómon (Salómon Hernández), a 65-year-old peasant whose closest companion is the marijuana that he smokes on a daily basis; and Luisa (Luisa Pardo), a 25-year-old chiva (heroin) addict who has come here to smoke the rest of her stash before detoxing once and for all. Over the course of a few days, Salómon and Luisa find themselves forging a timid platonic bond that hints at something deeper. 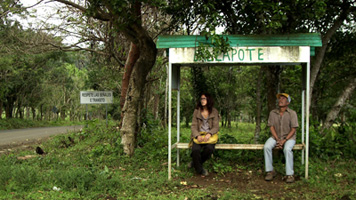 Olaizola’s quiet magic trick here is that Artificial Paradises runs a brisk 82 minutes, yet while the story takes place over the course of several days, it somehow advances as if being played out in real time. Perhaps it’s that unhurried opening sequence, or maybe it’s the way that cinematographer Lisa Tillinger slowly pans across the landscape, or how she dollies in and out as if on tiptoes. Whatever it is, it provides comfort in a way that films rarely do.

Normally, in a low-budget work such as this, the nonprofessional cast and their self-conscious glances into the camera would be distracting, a sign of amateur filmmaking. But here, these “accidents” add an endearing measure of charm and affability to the proceedings (when does that ever happen?). Pardo is a professional actress—since her character is going through the ups-and-downs of heroin withdrawal, this was a necessary, and wise, decision on Olaizola’s part—yet her performance feels as raw as the peripheral figures she encounters. It’s no surprise to learn that Olaizola’s first film was a documentary, for Artificial Paradises has docu-authenticity in every single frame. And even when she makes a bold stylistic decision such as having Salómon speak and sing directly into the camera, these moments transcend self-consciousness and instead land sweetly in the realm of Herzog’s ecstatic truth.

In the film’s closing moments, as the characters go their separate ways, likely never to see one another again, it hit me: ultimately, Artificial Paradises is about much more than drug addiction. It’s a gently optimistic requiem for those bittersweet connections that occur between drifting, lost souls, those fleeting encounters that provide just enough of a spark to carry them to their next chapters in life.