(Amour is now available on DVD

, through Sony Classics. It world premiered in competition at the 2012 Cannes Film Festival.)

With Michael Haneke’s Amour, this year’s Cannes has graced us with its first in-competition masterpiece: powerful enough to both sway this here Haneke-skeptic and have most of the press raving on Twitter mere minutes after the end credits even started rolling. If anything smacks of Palme d’Or this year, it must be Amour.

A story of the dying of a loved one as a shared ordeal to sustain (if not survive), the film is focused on an aging couple of music teachers. As Anne (Emmanuelle Riva in a jaw-dropping performance) suffers from a stroke and is slowly deteriorating into a state of near-infantile helplessness, Georges (Jean-Louis Trintignant) does his best to honor her wish of being taken care of at home without resorting to much-dreaded hospitalization. Their daughter Eva (Isabelle Huppert, in a role of little assigned screen time and much impact) visits from time to time, without really offering anything besides exasperation and concern, which Georges candidly deems “unwanted.”

With its central event being the grueling ordeal of Anne’s nearing demise, Amour is often difficult to watch, and yet it’s as unflinching in its depiction of suffering as it remains respectful towards the dying woman’s body. Visually, the film is nowhere near the unblinking approach of Paul Cox’s A Woman’s Tale—even though Emmanuelle Riva’s body gets disrobed in one scene, Haneke and his top-notch DP Darius Khondji keep their distance, so as never to appear as leering. In fact, Georges gets admonished by Anne for doing just that in one scene, and one of the movie’s most painful moments is that of an unfeeling nurse’s stubborn effort to make Anne face her own reflection in the mirror. In the world of this movie, looking is tantamount to entering the intimate space of a person’s pain, and that’s why Haneke keeps so much of the grim details of a flailing body discreetly off-screen. 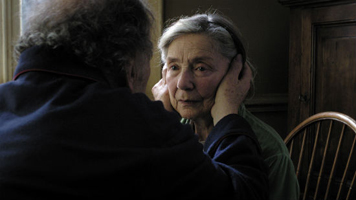 The entire film is a sustained feat of seamless editing that’s in fact quite bold in its rich (if casual) omissions. Time and again, scenes get nipped at the most unexpected moment, usually sparing us some instance of Anne’s humiliation or leaving a conversation unresolved and thus forever-hovering in our minds. The reaction shots we most expect to get simply aren’t there, as in the scene of Eva angrily demanding “a serious conversation” about her mother’s condition, with Georges pointing out that one way to go for Eva would be to take Anne into her own apartment. Since that would be too much of a commitment, Eva recoils—but we never get to see the recoiling (which could have enabled us to pass a judgment on her passiveness), only its result—namely, the preserved status quo of Anne staying with her husband.

Such restraint isn’t at all characteristic of Haneke, who made his name by delivering clinically austere examinations of violence and prejudice, most of them habitually peppered with carefully administered shock-cuts and outbursts of unexpected violence. The shock is still present in Amour‘s not-to-be-revealed final twist (as well as in its impressive dream sequence), but it doesn’t seem showy or superfluous in the slightest.

In contrast to such works of comfy denial as Mike Leigh’s Another Year, the aging couple in Amour is present as both affectionate toward each other and as struggling to preserve the level of affection that we observe. Despite the near-constant civility of their on-screen exchanges, there are hints at past wounds that never get developed, but retain their prickling force nevertheless (Anne describes her spouse as a “sometime monster” and Eva admits to having craved reassurance about her parents’ affection when she was a child, which she found in overhearing the sounds of their lovemaking).

What’s more, the casting of Riva and Trintignant allows for activating the audience’s own cinephile memory: we all know these people intimately, or so it seems. We saw their bodies as if they were those of our own lovers’. We know their naked limbs and have inspected them closely (Riva’s sand-covered back in Hiroshima, mon amour and Trintignant’s lean legs in A Man and a Woman, to name but two landmarks from their respective filmographies). It’s all the more poignant to see them now, aged and on the verge of ceasing to exist any longer.

Its soundtrack devoid of just about everything but the actors’ voices and the piano music they occasionally listen to, and its space confined almost totally to the couple’s spacious flat, Amour feels like a purposefully clean movie; an orderly ordeal. For all the bodily secretions that get released by Anne’s faltering body, Haneke respectfully averts his gaze from most things Anne herself would prefer the world not to see. Add to this some unexpected warmth and you get the director’s finest work to date: fearless but not merciless, moving but not obliterating, in which the ultimate prospect we all face is not wished away, but acknowledged in all its awesome, inevitable impact. 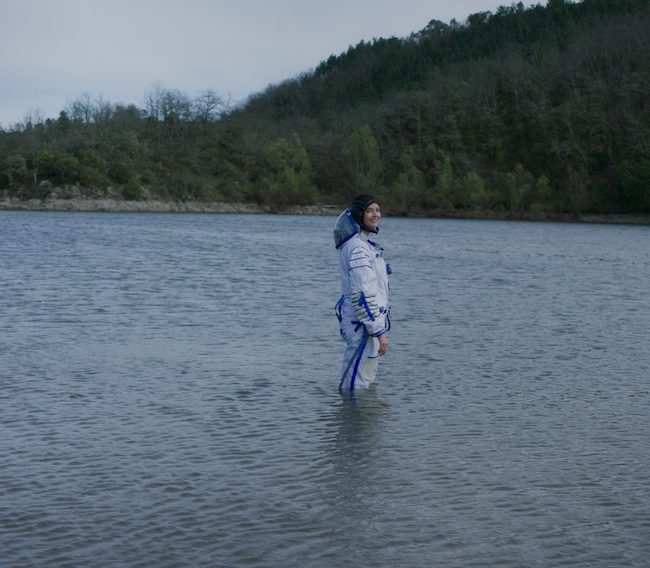 A Conversation with Zoé Wittock (JUMBO)