(2 Days in New York is now available on DVD

. After world premiering at the 2012 Sundance Film Festival, it was picked up for distribution by Magnolia Pictures. It opened theatrically on August 10, 2012. Visit the film’s official website to learn more.)

I’ve been known to knock the French, toodling around on bicycles with their phallic baguettes, vin rouge, and perennial boredom with all things Americain. But is there any way to withstand the Julie Delpy charm offensive? She had me at bonjour in this witty comedy, a sequel to her earlier film 2 Days in Paris. Delpy (who wrote and directed the film) reprises her role as Marion, now living with her boyfriend Mingus (Chris Rock, nicely subdued, and funnier for it). On the eve of a big gallery opening of her photography, Marion’s very French father and sister come to visit, and hilarity ensues. The film is silly, and light on its feet, but I know this sort of influx of European family members very well, and Delpy gets it right. If you surrender to the madcap humor, 2 Days in New York can be a very good time.

Both Marion and Mingus have children from previous marriages, hers by Paris lover Jack (Adam Goldberg), now her ex-husband. The failure of that union casts a somewhat suspenseful shadow over 2 Days in New York, as we wonder whether Mingus will fare better under Marion’s family’s unwitting assault. One of the clever traits of Delpy’s writing is the way she builds her characters, pairing cultural clichés (the French are oversexed and underwashed) with subtle observations about family and relationships. Marion’s father Jeannot (played again by Delpy’s father Albert) is a somewhat lecherous, unbounded joker, who refuses to recognize the concept of personal space, poking and prodding the rather uptight Mingus (most memorably when the duo visit a Vietnamese massage parlor). Despite his jolly demeanor, Jeannot is grieving for the loss of his wife, and the trip is meant to be a pleasant distraction, though it’s Marion’s sister Rose (co-writer Alexia Landeau) who seems to need it. Because Rose lives in Paris, it is up to her to babysit Jeannot, and this stewardship is the most recent in a seemingly long list of grievances between the sisters. The arguments between Marion and Rose, crafted with the peculiar, catty intimacy of sisterhood, are some of the funniest scenes in the film. 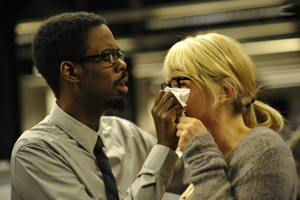 One of the running jokes in 2 Days in Paris is Marion’s long list of (talented) lovers, her blithe enjoyment of sex being not only French, but destined to unnerve an insecure and jealous nebbish like Jack. Though Marion has settled down, Delpy maintains that beat in New York. In a move calculated to irritate her sister, Rose brings along one of the exes, the very funny Manu (Alexandre Nahon), whom Rose is now dating. Delpy uses him in surprising ways, less as a threat to Mingus than as a way of humorously exposing the French understanding of race in America. Manu practically expects Mingus to be a rapper, and ideally, for Manu’s weed habit, a drug dealer, rather than the mild radio DJ and Village Voice writer he is. Manu maintains a blank, harmless innocence as he makes one gaffe after another, blissfully unaware of how insulting he is. But these misunderstandings are not so simply dismissed—how do you explain what it means to be Black in America? For all Mingus’ ire at being stereotyped, he himself retreats to his office to confide in a life-size cardboard cutout of Barack Obama.

Several people have noted how Delpy’s film (and the smart but chaotic Marion) recall Woody Allen’s Annie Hall. Perhaps. But last summer’s soufflé, Allen’s Midnight in Paris, was so firmly set amongst the rich that its patois can be hard to appreciate for anyone not accustomed to first-class. In contrast, Delpy’s worlds feel lived in. She’s not a realist, nor a mumblecore improvisor, but she has a nice feel for the small moments that both give a city specificity and keep relationships honest. In addition to being a triple-threat talent, what makes Delpy such a favorite among the women I know is that she foregoes Hollywood gloss for a rumpled, slightly frazzled, but still very sexy feminity. The smart, fully realized romantic comedy has long been an endangered species, even before the sad loss of Nora Ephron. But recent films like Lynn Shelton’s Your Sister’s Sister, and now Julie Delpy’s 2 Days in New York, give me hope. And isn’t that what romantic comedies are all about?