Montana International Film Festival (MINT) opened its second ever festival Thursday with a very Montana themed evening – a celebration under the Big Sky and stars outside of the historic Babcock Theatre in downtown Billings. The evening kicked off with a red carpet and opening ceremony by Indigenous singers who led a prayer and ceremonial drumming and songs.

Executive Director Brian Murnion and co-founder Ryan Kabeary welcomed everyone to the festival. After honoring Montanan Peter Fonda after his recent death in August, the organizers launched the festival with Smithsonian Channel’s Epic Yellowstone: Down the River Wild which was narrated by Bill Pullman. While viewable on TV, seeing Yellowstone (which is 45 minutes away from where we are right now) in all four seasons and its importance for all of nature was a reminder of how much Montanans are tied to the land around them as well as the heart and grit of the people who live here. Of course, for us out-of-towners, it just made us want to run immediately to Yellowstone Park and immerse ourselves in nature. But luckily the festival is only a 2-minute walk from part of the Yellowstone River that runs through Billings.

An extended Q&A afterwards with the filmmakers including series producer Thomas Winston, wrapped up before the after party hosted by Tito’s Vodka, a new sponsor to the festival this year. 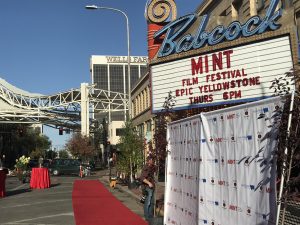 While only in its second year, MINT already has some strong traditions for guests including a comfy VIP lounge open all hours with plentiful snacks, 5-star treatment of all filmmakers and an audience hungry for great cinema. The opening night this year had double the attendance of year one which bodes well for the rest of the weekend.

Lined up this year are 60 films from 10 countries. The festival continued Friday with a panel on Women in Film led by Montana Film Office director Allison Whitmer before a day full of movies. Saturday is also jam-packed day full of shorts blocks, narrative and documentary features and the Indigenous panel. Last year’s panel was one of my favorite panels I have attended at any film festival and I expect to be a highlight again this year.

Some stand outs I am looking forward to are Hugh Hefner’s After Dark: Speaking Out in America with director Brigitte Berman in attendance, “…so good I can’t take it” by Kirk LeClaire about the Montana punk scene (who knew this existed?) and Once Upon a River by Haroula Rose, a narrative about an Indigenous female taking on a Huck Finn adventure.

With human trafficking being a huge issue in Montana, the Yellowstone County Area Human Trafficking Task Force presented California’s Forgotten Children, a documentary and panel discussion that was held Friday at 5:30. What is so key at regional film festivals is taking “issue documentaries” and tying them to your local activists and making real change. In regards to that, MINT has done a great job. The festival has also lined up some interesting shorts blocks including an Indigenous Voices block, Made-in-Montana, Conservation films and more.

The festival closes on Sunday with Robert The Bruce, directed by Richard Gray. As the film was made in Montana, it encapsulates the heart of the festival which is bringing the world here but also spotlighting to the world the Montana spirit.