It’s 8:30 a.m. when I arrive at McCarren Park Pool. I’ve always avoided this drained summer funland, considering it a chillzone for Animal Collective fans in American Apparel headbands. But this morning promises something very different. I’m a visitor to the set of NY Export: Opus Jazz, a cinematic restaging of Jerome Robbins’ 1958 ballet of the same name. 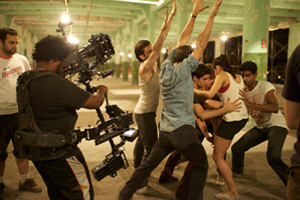 The movement to bring Opus Jazz to the screen is led by Ellen Bar and Sean Suozzi, both dancers with the New York City Ballet. (For a glimpse at the motives behind their passion project, as well as the nitty-gritty on the budget, Gia Kourlas’ NY Times piece can’t be beat.) This film version has been in the works for nearly three years, as evidenced by a grand teaser shot on the then-barren Highline in 2007. The film is co-directed by Henry Joost and Jody Lee Lipes, co-produced by Melody Roscher, and shot by Lipes on anamorphic 35mm. Producer Kyle Martin and art director Ariel Schulman are also key players, and it’s these two who greet me at the entrance to the park.

The set is bustling. The production team slaves at laptops set up at picnic tables, a sort of al fresco office. Executive producer Ellen is bundled against the autumn chill, watching dailies on her laptop before she has to dash off to a fundraising meeting. “It never stops,” she says good-naturedly. There has been a processing mistake at the lab and yesterday’s footage has been mismatched with sound from a cop show, but even set to the strains of an NYPD drama, Opus Jazz appears moody, seductive and impressive.

Meanwhile, Jody’s team can be seen across the pool, getting their behemoth of a camera assembled. Things are starting slightly later than planned: a dancer named Amar is stuck in traffic on the West Side Highway, and shooting can’t begin without him. His colleagues warm up nearby. Are they rehearsing? “Nah,” says Kyle. “Just goofing around.” Even their goofiest move is impossibly elegant and… balletic. (For a charming and edifying glimpse into these dancers’ on set experience, go here.) 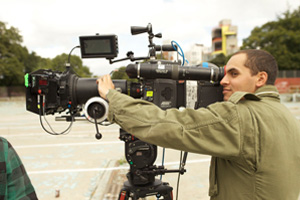 Kyle begins our tour at the “hot truck,” a catering vehicle that can deliver anything from French toast to quesadillas. If Center Stage is to be believed (future IMDB trivia: one Ellen Bar is heavily featured in that film) then Crafts Services is wasted on ballerinas. “No way,” Kyle says. “They eat way more than you would think.” As I watch the impossibly thin, impossibly graceful cast flit back and forth to the wardrobe tent, I can’t decide if I find this information comforting or not.

Next we hit the makeup and wardrobe tent, then move on to camera, sound (run by an ebullient Micah Bloomberg, who is setting up massive speakers at the pool’s center—party!) and art department—aka, Ariel, who is shuffling around moving bits of glass and trash and assessing his most dramatic contribution to today’s location: the thick white stripes stretching across the expanse of concrete that was once an Olympic-sized swimming pool. Looking to make the biggest visual mark with the least time and money, Ariel devised this plan. He hired several professional parking lot painters. Their paint, he says, was left over from the striping of Giants Stadium.

So how are Jody (accomplished cinematographer of Afterschool and cinematographer/director of the subversive wonder-doc Brock Enright: Good Times Will Never Be The Same) and Henry (who, along with Ariel, forms uber-creative commercial production house Supermarche) handling tag-team directing? According to Henry, it’s been smooth—he and his partner have organically traded storyboarding duty, and have an natural instinct about when to cede a bit of control to their colleague. Indeed, they’re smiling and laughing when they round a corner at 9:00 a.m., deep in conversation.

So then what’s it like directing dancers, especially when you’re not one? How do you ask for adjustments if you don’t have a technical understanding of the craft? Do you just say, “Do it again, with more emotion this time?”

“We don’t really talk in terms of emotion,” Henry says. “Just tell them to bring it. More fierce. That was fierce, but even fiercer. Or you can say ‘Hey, Guys, this one is for life.’” 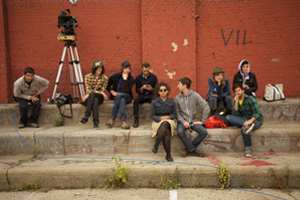 Although Kyle had warned me they were making a “real” movie, I was unprepared for the professionalism of it all. Delegation is often an alien concept on low-budget films. (Just yesterday on my own “set” I held a boom in one hand while massaging my DP’s sore knee with the other.) But this is a bustling hive of people who know what their job is and know how to do it. Yet it also retains the distinct “hey, let’s make a movie” feeling of a student enterprise (and I mean that in the best way possible). Perhaps that’s because most of the crew have been hanging tight since their days at New York University in the early oughts. These are, it should be noted, the same guys that brought you Wild Combination: A Portrait of Arthur Russell and the aforementioned Brock Enright, so their posse has a real monopoly on compelling, unexpected arts docs.

As impressed as I am with the tone of the set and the grace of the dancers, here’s what really gets me: these people have walkie-talkies! Although no one I’m chatting with does, which leads me to believe I’m chatting with the wrong people. (Editor note: No, Lena, that means you’re talking to the ‘right’ people!)

“You want to meet someone with a walkie-talkie?” Kyle asks. “I can make that happen. Where’s Brad Payne?” Brad Payne is Opus Jazz’s Key PA.

“I’ve done some research,” Ariel says, “and it’s unanimous—he’s the person every ballerina would like to be stuck with during an apocalyptic event.” With his firm handshake and well-worn plaid shirt, Brad strikes me as Williamsburg’s solution to Paul Bunyan. He does, indeed, have a walkie-talkie. And he’s using it: “Brad for Chad. Brad for Chad.” I giggle with girlish glee.

Noting my fascination, he offers to let me don a headset. On channel one, a panicked voice: “Amar is 100 and flying. Copy?”

Clutching my walkie-talkie, I follow Kyle to the top of an archway where Jody, Henry and the camera team are assembled and prepping for the first shot of the day. On the monitor the dancers can be seen removing their sweat suits to reveal denim cut-offs and body-conscious tank tops in primary colors. They form a tight, shivering cluster. But suddenly, it’s action—no more evidence of the chill in their bones. They scatter, leap, fall to the ground, animated bodies filling the static frame. This is the dawning of the Age of Aquarius! Like the best scenes in West Side Story, what they’re doing projects joy and foreboding simultaneously, striking awe in the heart of this earth-bound viewer. But Henry and Jody, seemingly immune to the wonder, are ready to go again. Bring it! Extra fierce! This one’s for life.