I met with German director Ina Weisse (The Architect) on Monday, September 9, 2019, at the Toronto International Film Festival, to discuss her new film, The Audition (which I also reviewed). Joining us was her lead actress Nina Hoss (Phoenix), and together we had a lively conversation about the movie’s production. The Audition follows violin teacher Anna (Hoss) as she trains a new pupil for the upcoming admissions audition to the prestigious academy where she works. In the process, she neglects her own child and marriage, with devastating consequences. Here is a condensed digest of our conversation, edited for length and clarity. Assisting with occasional translation needs (though Hoss speaks excellent English and Weisse speaks some) was Toronto-based journalist Naomi Buck.

Hammer to Nail: Ina, I know you’re a violinist, and your screenwriter, Daphne Charizani, is a cellist. Could you talk about your collaboration and your inspiration for this story?

Ina Weisse: Many story threads came together, with the central one becoming that of a woman trying to find her place in the world. And then, like an onion, we pulled back layer after layer and it became clear that she was a musician, that she had family, that she had a student, and so on.

Nina Hoss: Was there someone that you had in mind? You always knew she was a musician.

IW: Yes, we both had a lot of peer experience with musicians. Daphne and I talked a lot about our experiences in orchestras, and with teachers and the hard process of learning. We wanted to explore which perspectives, evolving over time, about this woman would be interesting to us.

HtN: In addition to her life as a musician, you have other details, such as the fact that she’s a mother, a teacher, and someone who is having an affair with a co-worker. Were there any other inspirations for the story, then?

IW: This structure and these elements came from what we found interesting in her character as we developed it.

HtN: So, Nina, watching this film, I would assume that you are a master violinist.

HtN: And so, my question is, are you also a musician and, if not, what was your preparation like for this role?

NH: Thanks again for that, though! (laughs) That was my goal, to get there, so that people would actually believe that I have a connection to this instrument. But no, I do play the piano, so I know how to read music and all that, but I have never played the violin … well, that’s not true, as I did, once, a movie, years ago, where I actually learned with the same teacher who then turned out to be a friend of Ina’s. So I worked again with her. She has a great technique; she works a lot with refugee kids from Syria. She doesn’t focus so much on knowing the notes, but is more intuitive. And that’s what helped me so much for Anna.

I felt that, yes, this instrument is very different from the piano, because it is a part of you: you feel the wood, everything is very sensual, you kind of have to feel where the sound is. You have to be somehow open to play this instrument, to produce the perfect tone. And if you’re not, you won’t get there. And that, to me, was Anna. If you’re too nervous, if you’re too tense, if you’re too undecided…like in the restaurant with her food, she wants everything at the same time! (laughs) And nothing’s right. She’s also somewhat egotistical: she needs an affair, she has it, but doesn’t go too far because she loves her husband. But she’s such an interesting character to me, and I could explore her through working on this violin.

Also, I had to be disciplined. I was actually filming Pelican Blood in Bulgaria, and every weekend, on Skype, I had my violin lesson, and put in the work, because otherwise I knew I wouldn’t make it. It would look ridiculous.

IW: And another thing: Anna has no boundaries.

NH: Yeah! She doesn’t know where the border lies.

IW: Her husband is sitting on the toilet and Anna goes in, even though he is a little uncomfortable. 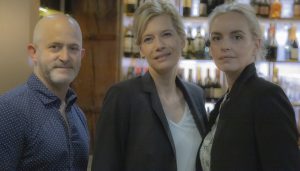 HtN: With her father, too.

IW: With her father, too!

NH: (laughs) To two men on the toilet!

IW: And that’s how she lives her life. She doesn’t know where the middle ground lies.

NH: And she does the same with the student. She doesn’t know her boundaries.

HtN: The thing about playing the violin is that you not only have to master the instrument but also the bowing, especially if you’re going to play with others.

IW: She plays, in the film, with a very famous quartet, which of course then becomes a quintet.

NH: And they actually changed their bowing so that I could have an easier time.

IW: In the beginning, they thought it wouldn’t work, since Nina wasn’t a violinist. But it was unbelievable, in the end! I think that you can’t see that she doesn’t play the violin.

HtN: Well, that’s good to know, because I am not a violinist, so to hear from a violinist that Nina is, indeed, selling this idea of Anna as a violinist is wonderful.

IW: With the son, sometimes, it was very hard.

HtN: Because the son doesn’t play.

HtN: So, let’s talk about your casting. Did you start with Nina, and then go on?

HtN: Who was next?

IW: I was looking for the best actor for Nina’s husband, because she is so brilliant. So I found Simon Abkarian, who is very well known in France. And then, I met Jens Albinus in Denmark. I traveled to Nina’s men. (laughs) It was always a very long discussion about everything, and not just the role: about politics, about love, about ideas. And then I would see if the way they think would be good for the film. I knew, of course, that they were both very good actors.

HtN: I really like Simon Abkarian, but I was curious why you made the husband French. I think it’s a nice detail. Why do that, however?

IW: It was always supposed to be someone from another country, because we wanted to give Nina’s character something. She wanted to get away from her father, she wanted to go to another country to have her own life. That was very necessary for the character. And then, why French? It has to do, as well, with Les Films du Lozange, because we spoke with [head of that  production company] Margaret Menegoz, who read the script and said she would do it and, voilà.

NH: So we needed a French actor.

IW: Yes. And also, I lived in France for a year, before, in Paris, and I have a close relationship to the language and to French film culture. I grew up with this. I was in a French kindergarten because my mother was a teacher in a French school, so I have long history with French and was very happy to make a co-production with French people.

HtN: I like the fact that he’s a foreigner, since it lends a richness and complexity to the family, including the fact that they are raising a bilingual child, switching back and forth.

NH: It is very Berlin, also, and you see that a lot between musicians.

IW: Yes. Thank you for saying that. In the conservatory, they come from everywhere. Musicians are international. It’s much better to say that. (laughs)

HtN: There are many reasons to do it, all equally valid.

HtN: So then, from there, how did you find your two boys? The son is not a musician, but the other one, Ilja Monti?

IW: He’s very good. He has won many prizes now, in Germany. I’ve known him now nearly 3 or 4 years. I looked at students in a music school, where I know two teachers. And one teacher told me to take a look at this particular boy. And on camera, he is very natural.

NH: Not intimidated at all. 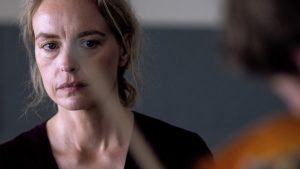 Nina Hoss in “The Audition”

HtN: And the actor playing the son, Serafin Mishiev, does a wonderful job with this simmering rage.

HtN: I imagine that the scene between Nina, and Ilja Monti, her pupil, which turns mildly violent, must have been challenging to film, since he’s not really a trained actor.

IW: Yeah, that was sometimes hard to do, to get him to the emotion. We sent him out to run around, sometimes for 10 minutes.

IW: This way, if you’re not an actor, you don’t know where to take your feelings, so it’s good to run, come back out of breath, and then play it.

NH: Otherwise it’s too much.

IW: With children, it is always good to work around feelings in that way.

HtN: And just focus on behavior.

HtN: Interesting. One final thing, Ina: you often have very short scenes and then quick scene transitions and a lot of ellipses. The movie is very brisk, and I really appreciated your mise-en-scène. Could you talk about about your decision to move so quickly?

IW: Yes. I think the rhythm came from the character. It’s not an easy process to talk about, because it’s really a process; you feel it. I knew that since the music is so nice you sometimes feel relaxed, but I wanted to tell the story of…

IW: …the work! How it is to work with music!

NH: Did you find the rhythm while editing or did you know while you were shooting?

IW: Both. But a decision I made with the editor, too.

HtN: My favorite moment, that really sets the tone, is just after the restaurant scene, with Simon and Nina, which establishes their rapport, and then (snaps) boom, next thing, she’s with her lover.

HtN: I like that transition very much, as I like the film. So, thank you very much. I really appreciate the film.