I met with director Wayne Wang (Last Holiday) on Sunday, September 8, 2019, at the Toronto International Film Festival, to discuss his new film, Coming Home Again (which I also reviewed). It’s an adaptation of Chang-rae Lee’s 1995 New Yorker essay about his time caring for his mother when she was dying of cancer. Starring Justin Chon (Gook) as Lee and Jackie Chung (Someone Else) as the mother, the film is a quiet meditation on life, love and loss, peppered with shots of the delicious Korean dishes Lee makes for a final New Year’s meal. Here is a condensed digest of our conversation, edited for length and clarity.

Hammer to Nail: How or when did you come across Chang-Rae Lee’s New Yorker article?

Wayne Wang: I read it when it first came out, actually. It was a very emotional article for me, but I kind of put it down. And meanwhile, I was working with Chang-rae on a novel of his called A Gesture Life. We worked on that for almost 20 years, and it’s a beautiful script but we couldn’t get it funded. It’s about comfort women; it’s not easy, politically, to get it funded.

And then my mother passed away, and a couple of years later, in 2018, in the summer, we had lunch and I said to him, “Oh God, it’s so hard to put one of these together. The essay is wonderful, and my mother passing away really hit something in me, emotionally, about the article; let’s just make this movie.” So, we basically pieced it together with different things that are very small, personal and independent, and we shot it.

HtN: As you were getting ready to shoot, what kind of casting process did you go through to find your leads? In particular, your son and your mom, since they’re the essential characters.

WW: Justin Chon popped up pretty quickly because my producer, Don Young, knows him from Gook and from all his other work, from his acting stuff, from Twilight, and said he would be really perfect in it. I googled him, and he looked great. He could look younger; he could look older. I talked to him on the phone for a long time, and he was so enthusiastic and passionate about doing it and becoming part of this guerrilla team, so to speak. So, he was on board right away.

Then, I remember, my casting person, Heidi Levitt, mentioned Jackie Chung, whom I had seen in a play at Berkeley Rep, and I said, “Yes, she’s a wonderful actress. I want to meet her.” I was down in L.A. and I met her, she read for me, and I said, “She’s the right one for the mother,” and that was it. It was pretty simple, but they’re both so good. I knew that they were each good on their own. I couldn’t tell what they would be like together, but they were terrific together.

HtN: Absolutely. They don’t look like there’s that much difference in age between them, especially when I saw them on stage at the Q&A. I couldn’t look up Jackie Chung’s birthdate, but I did for Justin Chon, who was born in 1981.

WW: I took a little bit of a license there, but she could be old enough for him. He looks a lot younger, in a way. 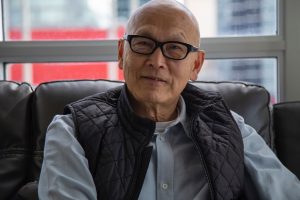 HtN: Right. I also think that, in the film, part of your mise-en-scène is this playing with timelines, because you shift seamlessly from the times when he’s in college, or when he’s at Exeter, to the present. You emphasize this blending of timelines by the fact that he’s always wearing the same outfit, so these shifts are almost unnoticeable. I think that the seemingly-not-that-great age difference between them, and the fact that you don’t necessarily change their makeup or the way they look, serves to create this blended storytelling in terms of time. I assume that was deliberate.

WW: Yes, that’s deliberate because the memories are all in his head, so he’s making them up. There’s basically only a difference between whether she was sick or whether she was not sick, in terms of how she looked. The other thing is that I wanted to imply a very subtle kind of obsession with the mother, too. This is not clear, not obvious. There’s something about a mother-and-son relationship that becomes more than so-called normal. That’s also why I like the idea that they could look like boyfriend/girlfriend. A lot of times you meet mothers and daughters, mothers and sons, and they’re a little bit like that. I wanted to imply that. It’s not a big deal.

HtN: You’re subtly implying an Oedipal complex in a way, which is as old as humanity.

WW: Right. I didn’t want to call it that, because it gets very specific, that way.

HtN: Sure. So, it’s a very quiet film. I believe, unless I’m mistaken, and I’ve only seen it once, that you only use diegetic sound, and that there’s never any score, except maybe at the end, over the credits. So, every sound, at least as far as I could tell, is coming from within the narrative space of the movie, and there’s not always a lot of it. Can you talk about your choice in sound?

WW: For the last few films I’ve done I have not used non-diegetic sound, or I have not used accompanying music. If I do use music, it’s the character in the scene playing music and listening to it. So, for example, the son actually turns on the player and he plays a rap song, or whatever, but there’s never accompanying music until the very end, in the very last flashback, I wouldn’t even call it a flashback, it’s more like an epilogue, that’s called “Flesh Connected to the Bone.” There is a piece of music that runs all the way under it. But otherwise, there’s no non-diegetic music.

WW: Yeah. There are a lot of very subtle sounds of San Francisco streets, cable cars, fog horns, if you listen carefully. I was listening to that stuff because I know the film, so I really like the background sound of the place. I like silences in films. Usually, films don’t allow silences, and I really like the silences. There’s so much of it. I have to go back to a film called Jeanne Dielman.

WW: Yes, Chantal Akerman, that’s right, which has so much silence, and I loved it. I remember, I was still in graduate school and I loved that film.

HtN: Yeah, films that play with silence are, indeed, wonderful. I think one of my favorites is Jules Dassin’s Rififi, with the silent jewel heist.

WW: Yes, that is a wonderful scene, and it’s so tense because you have to be silent!

HtN: You have to be silent, indeed! So, not only is it a quiet film, but you have some very long takes, especially the first shot of Chang-rae taking care of his mother. In fact, we don’t even know she’s there; he’s having coffee, and then we hear that single cough. Then you cut to the reverse angle on the window, and then you hold for a long time as he’s taking care of her. Then there are some other moments in the film where you do that, as well. Can you talk about your decisions to hold on those long takes?

WW: In the beginning, I really wanted to just stay with the shot. I’m not trying to be indulgent, not trying to bother people, but I wanted people to sit there and think about the scene, think about the character, and think about themselves. In the morning, you make yourself coffee and you sit there for at least 10 minutes. I just want the beginning of the pacing of the film to be very consciously silent, and paced very slow, taking its time. As the film builds, the rhythm starts picking up. But in the beginning, I really want you to settle in. Some people, I’m sure, will get upset and just walk out, but other people, hopefully, will settle down. You look at any of these action films these days, they don’t let you breathe at all.

HtN: They do not. Your film is definitely enjoying the aesthetics of slowness, and there’s nothing wrong with that.

WW: In the end, the whole film is about what life means, the slowness in life, accepting some of it, and then also accepting the impermanence of it. That’s all related: the pacing, the change, the ending. 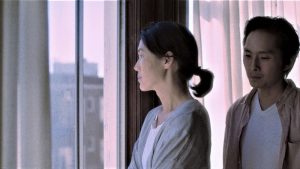 A shot from “Coming Home Again”

HtN: So, in your career, you’ve shifted around quite a lot, including a middle section where you were making much bigger films like Last Holiday. Last night, at the Q&A, you talked about the pleasures of getting back to this kind of small filmmaking. Beyond the budget and, perhaps, the pressure on you from studios, how does making a film like this compare to the bigger ones, in terms of your own process?

WW: This is going back to the beginning when I did Chan Is Missing and had very little money. We believed in it, we shot it over weekends, and we had nobody telling us what to do. But in the middle period when I was doing the studio films, I remember the first day on the shoot of Maid in Manhattan, with Jennifer Lopez and Ralph Fiennes, the big phone call came in – and there were always these phone calls the first few days of shooting – that Ralph Fiennes was losing his hair in the front: “So, what can we do?” So, you deal with those problems versus trying to really make the film. That’s a very simple, easy example.

HtN: What kind of rehearsal process do you have on a film like this versus, perhaps, a bigger film?

WW: Almost none, actually, on this.

HtN: On this, really?

WW: I had two really good actors. The thing I wasn’t sure about is how they would work together. The luxury was that we had the time on the set to let them get into character, get into the scene, and not rush them, so that they could feel the resonance between each other. They were both so good, they just worked it out. It just came like that.

HtN: Well, it definitely comes across on the screen that they were able to have this time.

WW: Also, what helped was that we had a lot of scenes where it was the procedures of taking care of her, like giving her the drinks that she needed, giving her the painkillers. All those things, we shot a lot of it in the beginning, so taking the time to do that gave them the relationship for that.

HtN: Again, it comes across. So, thank you so much for talking to me. Congratulations on the film!