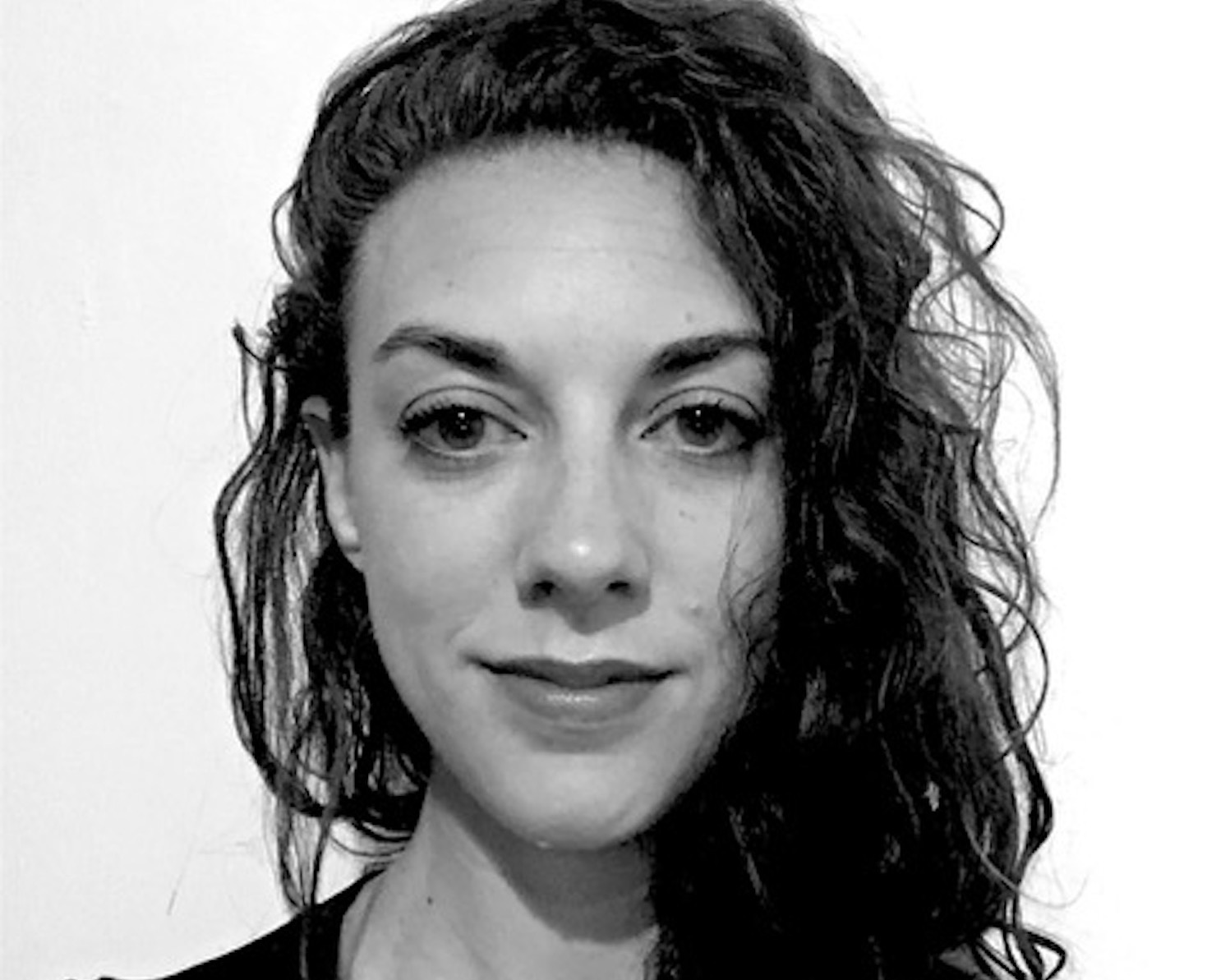 Director Sierra Pettengill (The Reagan Show) just premiered her new documentary, Riotsville, USA at the 2022 Sundance Film Festival. I reviewed it as part of our coverage, and before the festival even started, I had a chance to chat with her by Zoom. The film is a cinematically piercing examination of how 1960s model towns built by the military to practice riot control have continued to exert an outsized influence on present-day policies. What follows is a condensed digest of our conversation, edited for length and clarity.

Sierra Pettengill: I was actually working on another project. I work as an archivist and all of my past three films have been all archival. And so I was working on another project and I read a very quick mention that there was the existence of something called “Riotsville, USA,” and it was sort of a half-sentence and it sounded insane to me. And so I did a very quick Google search and found almost nothing, which for me is all I need. It’s more interesting than finding something.

And so I eventually found a record in the National Archives catalog that sounded like it might fit and I borrowed some funds from another film and ordered a transfer, sight unseen. And then when I saw the footage it was just…beyond fascinating. I’m a big fan of Medium Cool. And there’s some similar material in Medium Cool, which I had, and I’m also a huge fan of Punishment Park and I find this kind of right-wing performance really revealing. I think it’s really rare that you get to see, in images, the way that the government and the army look at people and look at protest movements. It’s almost like they’ve reconstructed the world in their own image and happened to film it.

And so I found the footage and I had very little information about what Riotsville was. There has since been an incredible book published called Badges Without Borders, by Stuart Schrader, which provides some information. But at the time, when I started, there was a little primary-source information, but no one had written about it. And so I was like, literally, “What is this? Who formed it? Who paid for it? Who are the people who are acting in it?” And on the other hand, “What does this mean outside of the specific 1968 historical context?” The narrator asks in the film, “What are we looking at?” And that really has been my question. There’s something more than a sort of pure historical moment in a government program here.

HtN: What was your editing ratio like? How much material did you have to sift through, approximately?

SP: Well, it wasn’t hard to sift through. The Riotsville material is where we started. That was the genesis of the project, those theatrical recreations. And the first chunk of footage I found was in the National Archives, but a lot of the Riotsville footage comes from ABC and the BBC. So, I actually have no idea what that ratio might be because the research doesn’t stop for me until the film is done. And as I worked with my editor, Nels Bangerter, and we figured out where we were going, that sent me on a new search. And there’s just a ton of stuff that’s not in the film that’s beyond archival.

Early on, a researcher and myself tracked down everyone we could who was in the recreations and interviewed them on the phone. At some point I did a little recreation of my own that didn’t wind up in the film. So yeah, there’s a lot that’s not in there. But it’s not a self-contained archive in the same way that my last film, The Reagan Show, was. This really just kind of went on and on in every possible direction. 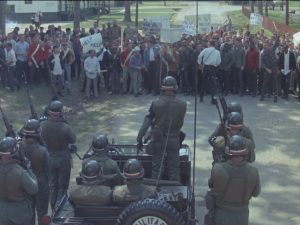 A still from RIOTSVILLE, USA

HtN: Was there material that you went in search of that was particularly challenging to find?

SP: The thing I wanted to find was sort of midway through the film. In Illinois, there’s a riot posse filmed and it’s formed by this man, Sheriff Woods, who is trying to put together volunteers in advance of the 1968 Democratic Convention, even though he’s outside Chicago. It’s a really ugly moment. Sheriff Woods is a pretty horrible character. He was really aggressive in, I guess, prosecuting any sort of housing covenants for Black residents in his county. I kept reading about him and I saw photographs of him doing a staged stunt where he had mace sprayed in his face, on camera, to prove that it doesn’t hurt and it doesn’t bother anybody. And I found photographs of that, but I was never able to find film footage, which was frustrating.

But yeah. I mean, I think what was harder in this film was what not to include. And we made two, I think, pretty big decisions. One, early on, was that there wasn’t going to be footage of any actual unrest on the streets until the very end. That we weren’t going to use that footage that is loaded in all sorts of ways. And then the other thing was that we were going to limit this footage to material that was either broadcast on television or captured by the military.

HtN: How did you cast your narrator, Charlene Modeste?

SP: She was a friend of one of our Executive Producers, who’s a voiceover artist, herself. Nels Bangerter, the editor, Tobi Haslet, the writer, and myself spent a long time, probably a year-long process, the three of us working sort of full-time on this, and we asked ourselves, “Who is this voice, who is the voice of the narrator, what perspective are they speaking from?” And we thought it was kind of the voice of conscience. It’s the conscience of a nation. And maybe we should try to not pin that down to one single person.

So we did some versions of the film that had eight different narrators, which is a really different experience. I love that version of the film, too. And then eventually, we decided that the film is really maximalist in a lot of ways: there’s a lot of text, there’s a lot of images we’re doing, a lot of digital manipulation of sequences. The music just has its own incredible life and maybe having eight different narrators might just tip us over into chaos. So, when we thought that we might need to start looking for a single person, we found that Charlene Modeste’s voice has this mix of real strength and also wariness that I think fits the project perfectly.

HtN: You mentioned digital manipulation of the sequences. Can you explain what you mean and what you did, specifically?

SP: I would love someone to talk to Nels about this, at some point, because he’s a total wizard. Often, people will hire a VFX company or something and Nels did all these on his own, which was amazing to have an editor who can do that. And I really loved that part of the process. So each time there’s a break for the narrator, the footage that runs under that narration is all digitally manipulated, and we wanted to do it in a way that really shows that we’re not trying to pass anything off under the radar. You’re really seeing that manipulation.

So, in one sequence there’s a really falsely slo-mo footage where you start to see all the digital pixels sort of warp. They can’t keep up the movement of that animation. And in another one, we zoom way into a photo so that you’re looking at the half-tone dots that comprise it when it’s printed in a newspaper. Another time we zoom way into the blue police helmets in the Chicago convention and then put them on a sort of old LCD screen. So you’re looking at a really abstracted version of that, also slowed down.

I’m not against immersive archival experiences, I guess, but I don’t ever feel comfortable creating those. And for me, a big part of this film is that we’re in 2022 at this point, looking at this material, and the archives have come from somewhere and they pass through our hands and they’ve passed through lots of hands and they’ve been used and reused in different ways. And so we acknowledge that literally with the narration. What is our position here in the future looking at something in the past?

HtN: I really like those zooms in to the photos where it becomes abstract.

SP: Oh, we didn’t want it to just be pretty. We don’t want to ever forget that we’re looking at something that was created.

HtN: Sure. Speaking of things that are created, are there anything like those Potemkin riot villages today, that you know of? 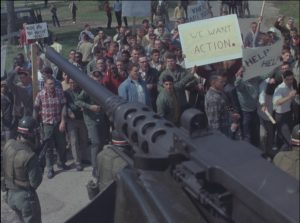 A still from RIOTSVILLE, USA

SP: There are. Yes. I get probably a text every week from a friend sending me another. There’s a model city of Chicago to train ICE agents to raid. They’re all over. There are some great films, too, about ones they were doing to replicate Iraq and Afghanistan in the early to mid-2000s. It’s pretty common. What was striking to me about this material in particular is this same thing where the military is going through a war simulation when it’s speaking of its own citizens, I think that takes it to another level. And that is not what the role of the military is meant to be in the United States.

HtN: And it tells you so much when you see the soldiers playing hippies in those scenarios, with the contempt and the caricatures that they re-enact just telling you everything you need to know about the organization’s approach to that issue.

SP: It feels like a real range, to me. And I felt that in talking to a lot of those soldiers, I always had to remind myself that a lot of people were drafted at this time. And so there’s not sort of a single ideological layer. A lot of the soldiers I talked to, especially the cinematographers tasked with going out into the cities and filming, said that they actually agreed with things that were being said. And so it’s complicated. And I also think Black soldiers in that environment are having a different emotional experience. And they’re actors and they’re playing a part.

I think the more chilling and more telling footage is that of the audience in those scenes, who are laughing. Those are generals. Those are members of the CIA. Those are senators. Those are police chiefs. Those are people who actually wield power in really profound ways. And we include that footage for a reason where their reactions, I think, are actually much more important than a bumbling 18-year-old.

HtN: Well, Sierra, thank you so much for talking to me. I found your film quite fascinating.

SP: I appreciate it. Thank you. This is a great conversation.