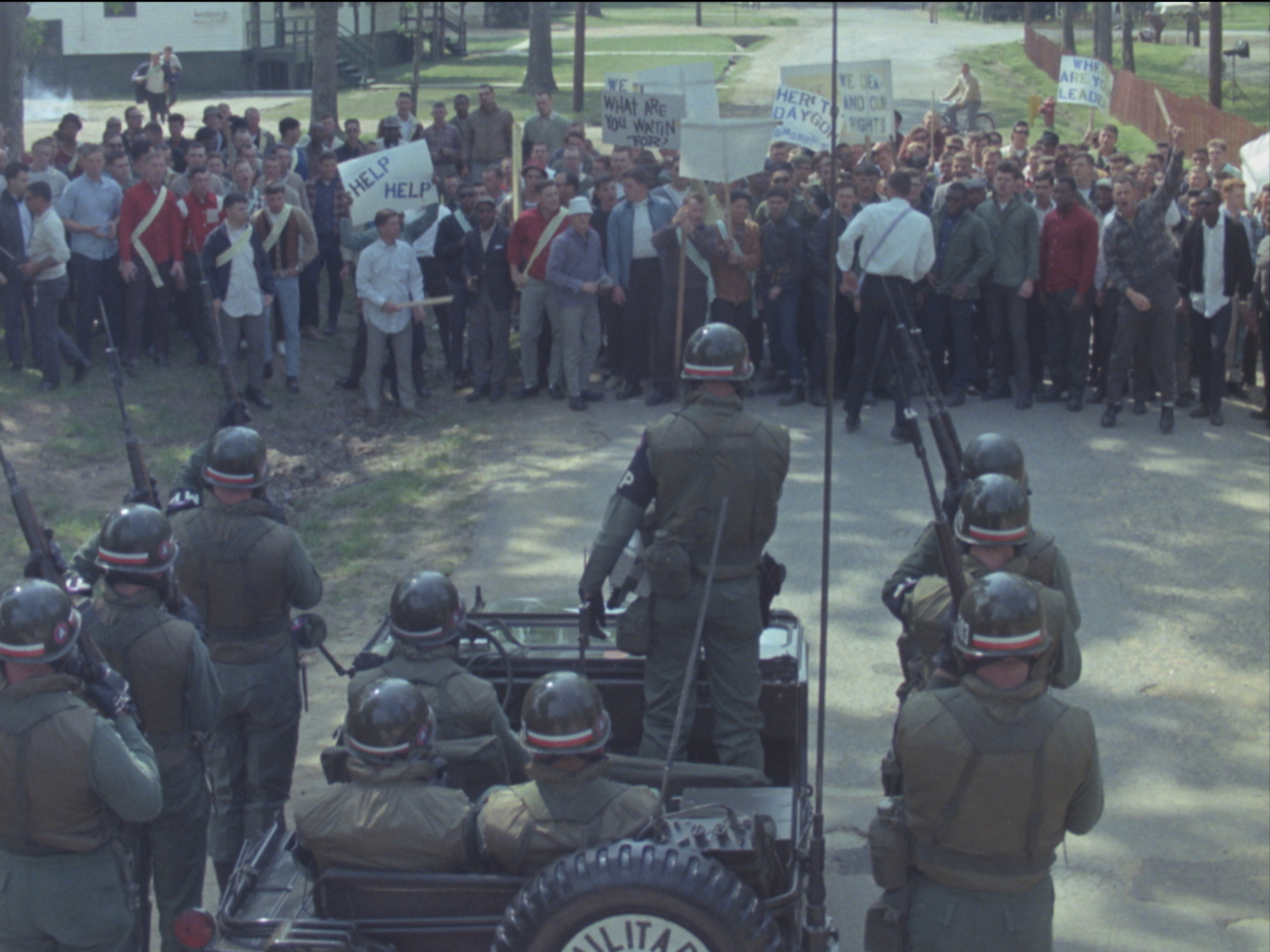 (The 2022 Sundance Film Festival runs January 20-30 all virtually.Check out Chris Reed’s movie review of Riotsville, USA. Like what you see here on Hammer to Nail? Why not pay just $1.00 per month via Patreon to help keep us going?)

There’s nothing like confirmation bias to motivate life decisions, a particular point of view sure to be reinforced by shaping the world to one’s expectations. While the repercussions of such thinking may be limited on an individual scale, they loom larger within government bodies. If every problem looks like a nail, then a hammer appears the best solution. In Riotsville, USA, the latest documentary from Sierra Pettengill (The Reagan Show), we learn how today’s violent police actions, at least as they relate to protest and riot response, have their roots in policy decisions of the 1960s. Working exclusively with archival material from that period, complemented by scripted voiceover from actress Charlene Modeste, Pettengill crafts a cinematic dystopia that is all the more disturbing because it is real. Welcome to the present, grounded in the past.

The titular “Riotsville” is a Potemkin Village—called by its makers a “model town”—built at Virginia’s Fort Belvoir. There, starting in 1967, the United States Army staged reenactments of youth protests, performed by soldiers in hippie costumes, to give the men in uniform practice keeping the peace (by escalating the mayhem, of course). All the while, high-level officers watched the proceedings, laughing and applauding with gusto. Oh! What a lovely war it was…not to mention that there was a second Riotsville built at Fort Gordon, in Georgia, for double the fun.

Cutting away from the spectacle, Pettengill contextualizes these shenanigans in the swirling maelstrom of ‘60s civic upheaval. She explores President Lyndon B. Johnson’s National Advisory Commission on Civil Disorders, aka the Kerner Commission, which published its 1968 report in paperback form to bestseller success. Its central thesis was that “our nation is moving towards two societies: one black and one white, separate and unequal.” Sadly, despite this lengthy exposition (700 pages!) of how institutional racism was driving inequality and fueling protests, the only part of the report that anyone paid attention to was the “Supplement on Controlling Disorder” that called for greater funding of the police. And here we are.

Pettengill then takes us to the two big political conventions of 1968, the Democratic one in Chicago and the Republican one in Miami Beach, both subject to protests, to very different results. “We’ve heard about Chicago, but we’ve been living through Miami Beach,” says Modeste. Simple airing of legitimate grievances led to harsh crackdowns. Not for nothing, we also learn about the manufacture of tear gas, a chemical weapon used indiscriminately by the forces of law and order to pacify their own citizenry.

There’s so much more, as well. including a demonstration of how even-handed public television strikes conservatives as too liberal. Pettengill draws clearly articulated connections between then and now and shows what might have gone differently if our government had trusted its own research rather than gut instinct. Brilliantly constructed, Riotsville, USA offers striking visual storytelling combined with sharp (if bleak) historical lessons. It’s terrifying entertainment. Enjoy!