A Conversation with Sherng-Lee Huang and Livia Ungur (HOTEL DALLAS) 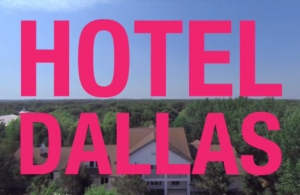 Named in 2016 to Filmmaker magazine’s annual “25 New Faces of Independent Film,” artistic and life partners Sherng-Lee Huang and Livia Ungur are at the forefront of the doc/fiction revolution. As I wrote last summer, their Berlinale-premiering, debut feature Hotel Dallas (reviewed here) “tells the true story of how the soapy series Dallas — the only American program allowed to be aired in Romania because the authorities believed it a cautionary tale about the evil capitalist West — became must-watch TV that influenced an entire generation. It also tells the fuzzier tale of how Livia, who fell in love with Patrick “Bobby Ewing” Duffy as a youngster, and her father Ilie, who fancied himself a wheeler-dealer like J.R., pursued their Dallas dreams after the fall of the regime. While Ilie built Hotel Dallas (a Southfork replica and a means to embezzle millions in taxes), Livia left for America, only returning years later to revisit her adolescent obsession through the prism of the “new” — although ’80s-inspired — Romania. (And yes, Duffy actually agreed to be in the film, compensated with only a bottle of wine.)”

And after you wrap your head around that whopper of a synopsis, read on to learn more. I spoke with the counterintuitively down-to-earth couple before the film’s Vimeo/Amazon/Google/Fandor streaming debut.

Hammer to Nail: So how did you decide to start working together in the first place?

Sherng-Lee Huang: I’m a freelance video producer by trade, and over the years I’d directed a lot of shorts for YouTube—comedy and music videos mostly. Livia, on the other hand, got into filmmaking through art.

Livia Ungur: After we got married, I went back to school. I wanted to be a visual artist and get an MFA. One day I needed help with a video art piece, and that’s how the collaboration started.

SLH: At first I was just the technical support! Livia went on to get her BFA at Hunter and then her MFA at Yale School of Art. Meanwhile, though I wasn’t in school, the collaboration was deepening. I was learning a lot about video art through Livia.

LU: By the time I got to Yale it was an equal partnership. My professors were totally open to the collaboration – and Sherng-Lee even attended the critiques, just like a regular student. Hotel Dallas started as my thesis at Yale, and it’s as much an art project as it is a film. I think, going forward, that’s going to be our space—somewhere between cinema and art.

Hammer to Nail: How did you get Patrick Duffy to agree to be in the film? (And for only a bottle of wine!)

SLH: The film is shot first person, from Patrick’s perspective. You rarely see him on-camera, because he is the camera. But you’re always hearing his voice — that very familiar TV voice. We shot almost the entire movie before we even approached Patrick. As for actually getting him…

LU: (laughs) We could probably star in a commercial for IMDb Pro! That’s how we found the info of Patrick’s manager. It was just a cold email. Patrick had no idea who we were, or that we had been making a film for the past 18 months, with a protagonist who was essentially Bobby from Dallas. We were shocked when he said yes, literally just two days after we sent the email. He asked about fees, and we offered him something ridiculous, like 10 percent of our mythical future revenues. He said, “Just bring me a bottle of wine.”

SLH: It was a good bottle of wine! Patrick transformed the film. He gave an amazing performance. He’s a vulnerable and lost soul, very different from the confident Bobby in the TV show. He brings a core of humanity to the film that was maybe lacking before.

LU: When you’re starting out you’re unproven, and you’re always looking for that one person to say yes, to take a chance on you. And that yes makes everything else possible. For us, Patrick was that person. 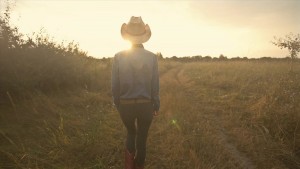 HtN: How on earth did you nab that Berlin premiere with no track record and no connections?

SLH: Dallas was huge in Germany, so I think that helped! (laughs) The Berlinale people had no idea who we were. But after we sent in the BluRays we followed up with every programmer individually. It was the same way we reached out to Patrick—just a cold email. I can’t say for certain, but I think the emails helped to get their attention.

HtN: Why did you decide to go the hybrid route rather than make a straightforward documentary?

SLH: We initially thought of the film as fiction. Our audition process consisted of interviewing the actors about their memories of Dallas and Romania in the 80s. Their answers were so compelling that we needed to include them somehow – so that’s when we started thinking of weaving doc segments into the narrative.

LU: The mix of fantasy and reality was a way to capture the craziness of Romania in the 80s. When I was a kid, the evening news was fabricated. The reporters told us that Romania was the most advanced country in the world, while in reality we were starving. That’s the kind of environment where a show like Dallas becomes a guide for peoples’ worldview. Meanwhile, I was processing all this stuff as a little girl, with a child’s understanding of reality and the wild imagination of a child. The hybrid form was an expression of that experience.

HtN: How did budget constraints affect your production decisions?

LU: We had no crew, besides the two of us. Sherng-Lee shot most of it, and I shot the scenes he’s in. In the one scene where we’re both in it the camera is on an unmanned tripod, set up across the road.

SLH: Working without any money you’re limited in some ways, but you’re also, weirdly, quite free. It’s easier and less stressful to experiment because there isn’t a huge investment at stake. We shot the film during a road trip across Romania, writing the narrative scenes as we went along, getting inspired by the locations. We were on the road for eight weeks. We needed the time to discover the story we were trying to tell. It’s amazing to me that some wonderful indie features get shot in two weeks. That’s just not how we operate.

(If you enjoyed this interview, it plays well with our lead critic Chris Reed’s interview back in June of this year at the Maryland Film Festival…)