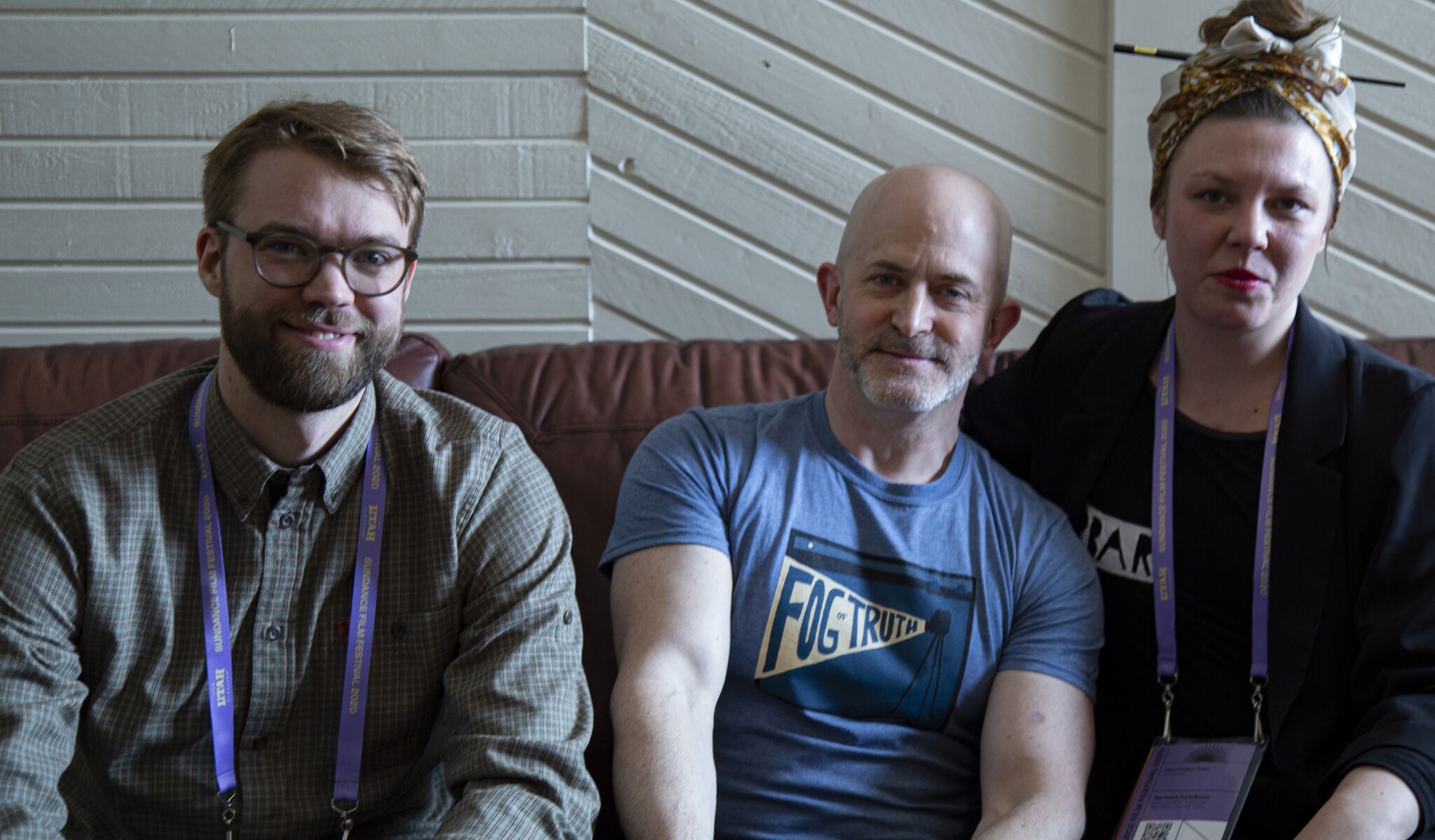 I met with Norwegian director Benjamin Ree (Magnus) on Thursday, January 23, 2020, at the 2020 Sundance Film Festival, to discuss The Painter and the Thief (which I also reviewed), his documentary profile of the odd and moving relationship that developed between Czech painter Barbora Kysilkova and Karl-Bertil Nordland, a man responsible for stealing one of her paintings. The movie embeds the audience in the intimate everyday lives of both subjects, telling its tale alternately from each of their perspectives. Nordland, a drug addict and convicted petty criminal, goes through the biggest transformation, but Kysilkova – one of the unquestionable catalysts for Nordland’s change for the better – has her own burdens to bear. It is an honor to get to know them both so well. Much to my delight, Kysilkova joined Ree and me for the interview. Here is a condensed digest of our conversation, edited for length and clarity. At times, I have adjusted Ree and Kysilkova’s English to make it fit American idioms.

Hammer to Nail: Benjamin, how did you come across this amazing story?

Benjamin Ree: I was actually researching art robberies, because I’m very fascinated by art robberies, and in Norway, they have a great tradition of art robbery, particularly Edvard Munch robberies. So I was reading a lot about it, having some meetings. Then I just came across this story, it was on the front page, and the next day, I contacted Barbora. That was the beginning of the film. I didn’t know what it would end up becoming, because every film I do, I tend to come in early in the process and film and see what happens. So I always go into making documentaries with the thought of, “Is this is going to be maybe a short documentary?” This story just went crazy. So much happened, so many turning points, so many great recording days. After a little while, I understood that this has a real potential of becoming a feature-length documentary.

HtN: Barbora, what was your reaction initially when Benjamin approached you about this film that he wanted to make about you?

Barbora Kysilkova: Well, let’s begin with the day of the robbery, itself, when the gallery contacted me and said, “Hey, good morning Barbora. We have kind of bad news for you. There was a robbery at the gallery and two paintings were stolen and both of them were yours.” So that was kind of a shock, number one, that of course one would never imagine that somebody breaks into a gallery and steals art, especially when the canvas is 2 meters 30 by 1 meter 70 and there are two of them. From there, I wanted to start to understand what is happening, why it happened, what happened. Therefore, when Benjamin contacted me, I was still in a state of decent surprise from what happened.

And then I had also started to get to know Karl-Bertil, which for me resulted in some very strong emotions. So then, when Benjamin approached me, yes, of course I was very surprised and also confused not knowing what that is about. So I said, “Yes, let’s just see what’s going to happen.” Right away, I also called Karl-Bertil to check up with him whether that’s something he might also approve. Then the next day, Benjamin came to my studio and I was very surprised at what a young gentleman he was. I actually really sort of thought that I would meet an older guy, but the chemistry there went so fast, so well between all three of us, Benjamin, Karl-Bertil and me. Somehow, suddenly, it all felt like everything is in its right place and these things are supposed to happen.

HtN: Speaking of things that are supposed to happen, what made you go up to Karl-Bertil, in that courtroom, and ask if you could paint him in the first place?

BK: So, let me just go back to where I was at that time. I’m still quite a young painter, not known at all. I do not have a big name in the art scene. So, why would somebody decide to break the law in order to get my work, to get my art? This already is, for me, highly fascinating. And I also felt, as an artist, that I am facing certain challenges here. I have to do something out of it, you know? So, what else? Since I’m mostly painting people, what else could I do but put my thief into my painting? 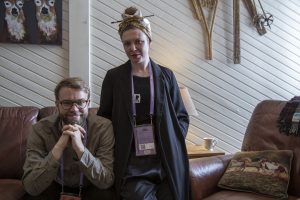 HtN: And so fortunate for the story, and for the two of you, because of the relationship that you developed. Benjamin, you started filming Barbora after she and Karl-Bertil had met, yet there is material in the film that predates you filming, such as when you show Barbora painting “Swan Song,” one of the stolen paintings. Was any of that recreated for the film or did you get access to archival material?

BR: We were very lucky to have a friend of Barbora give us footage she had shot, where she documented a lot of Barbora’s paintings and exhibitions. So that is what we have used in the beginning of the film. And that friend was also in the trial together with Barbora. Barbora recorded the trial because she didn’t understand the language. She had a recorder that was left in her bag or something like that. That’s why the audio isn’t great, but it still captures a moment that is kind of the most crucial moment in this film. And then Barbora has recreated the scene with her drawings from the courtroom.

HtN: (to Barbora) Those were your drawings from the courtroom? As opposed to official court drawings?

BK: Correct. I might be a good official court drawer. (laughs)

BK: (laughs) If the first one doesn’t work out.

HtN: Well, it seems to be, you know… So, Benjamin filmed for over three years and in that time, quite a lot happens, obviously personally and professionally, and we see quite a lot of it on camera. It’s a very raw and intimate film. Did you ever have any worries about how intimate the story might become? Any second thoughts about where the film was going? It’s a long process.

BK: I guess the better person to ask this question of would be Karl-Bertil, who unfortunately is not here. As for me, basically, how I see myself in the movie or in that period of three years where the camera was following me and Karl-Bertil, I was not really doing much different from what I would do anyway. I was just painting throughout the whole movie, more or less, and kind of following the ups and downs of Karl-Bertil. I did not really feel like I put so much of my own privacy at stake there when it comes to the movie. What I was much more concerned of was basically the health of Karl-Bertil, but that has not really much to do with the movie. It’s basically about the human interaction of seeing my friend falling apart and then lifting himself up again. That was much more of my concern.

HtN: Sure. And it is remarkable that he stays a part of the film, as well. In fact, my next question is tangentially related to that. Norwegian prisons – surprise surprise – seem quite different than American prisons. Nevertheless, I’m imagining that there was a period of negotiating access to filming Karl-Bertil when he was in prison for that year. How did that go?

BR: It was no problem at all, just meeting the boss of the prison, who has been in many documentaries. Michael Moore went there with his Where to Invade Next film. The prison director had almost a hall of fame, with a lot of pictures, when we walked into his office, of all the documentaries that have filmed there. I think that he gives access to so many documentaries because it’s a fantastic prison, where you rehabilitate people, rather than punish. The focus is on rehabilitation. I really give a lot of credit to the people at Halden Prison for their work. They have great psychologists there and they have a kind of openness to journalists and documentarians. I think they want to show the world how it’s possible to manage a prison. 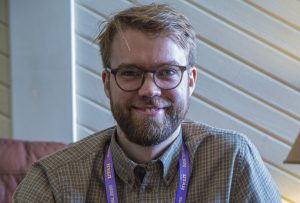 HtN: Imagine that: a prison made to rehabilitate rather than just punish.

BK: What’s interesting is that since I came to visit Bertil in the Halden Prison and not only that, but also in many different hospitals, I actually call Bertil my best private tour guide in Norway, because thanks to him, I’ve seen a countless number of hospitals where he was brought to after his accidents or weaker moments and rehabilitations, and also the prison. So I have a very, very specific knowledge of the Norwegian landscape and countryside that is more than just the usual fjords.

HtN: (laughs) It’s a different kind of tourism. Perhaps a more genuine one.

HtN: Barbora, you are, indeed, not originally from Norway, but from the Czech Republic. What drew you there in the first place?

BK: Before I moved to Norway, to Oslo, I lived in Berlin for seven years, where I actually met my current partner, Øystein, back in 2007, and we were friends for really, really many years, with him returning to Berlin very often. After seven years, because of my life situation, I decided that I had to leave Berlin right away. It all came together that Øystein, let’s say, invited me to follow him to Oslo. Then my reaction was like, “Well, I definitely would love to. But you have to know that I have just five euros in my account and I don’t know when the situation will change. Basically, I’m a poor artist and you’re inviting me to stay in one of the most expensive cities in the world.”

HtN: Is Oslo really that expensive?

BK: It is. Well, pretty soon, I understood why I went there. I met amazing people, including, as Benjamin mentioned, this friend of mine who is a wonderful lady.

HtN: So, how is Karl-Bertil today?

BR: Karl-Bertil is doing very well today, and he’s still studying, and he is clean. He wasn’t allowed to come into the US because of his criminal background, but if it’s OK, I’d like to give you a message he asked me to deliver to journalists and people in the US: he’s single today and he has even bigger muscles now than you can see in the film. He has new face tattoos and you can find him on Instagram under the handle bertilizer.

HtN: (laughs) I’ve looked at his Instagram account. There are quite a lot of photos of his face and his muscles.

BK: (laughs) He knows how to sell himself.

HtN: Yes. Yes, he does. Well, thank you for making the film, both of you. It’s really quite beautiful.

BK: Thank you, Benjamin, for making this movie.

BR: And thank you for participating in it over three years.

BK: I just lived my life and you were just around with a camera.