A Conversation With Otto Bell (THE EAGLE HUNTRESS)

I met with English-born, New York-based director Otto Bell at the 2016 Middleburg Film Festival on Sunday, October 23, 2016, to discuss his feature-length documentary debut, The Eagle Huntress, in which he tells the story of how a 13-year-old girl, named Aisholpan, from the Altai Mountains of Kazakhstan, breaks down her local gender barriers by taking up eagle hunting (hunting with trained eagles), normally a strictly male province. Here is a condensed digest of that conversation, edited for clarity. The film is in theaters now!

Hammer to Nail: So this is your debut feature …

HtN: Could you talk about your career before making this and the kinds of things you were doing?

OB: Yeah, I was making short-form commercial work, for brands – documentary-style – about real people, more often than not in foreign places, working through a translator. And I worked with the cinematographer on this film, Simon Niblett. He and I, for example, worked together in Uganda, Peru, Russia, Japan, Vietnam…we went all over. So I think I’ve told more stories outside of America, in foreign languages, than I have inside America, in English…(laughs)

HtN: That’s interesting, when you say “short-form commercials for brands” … so these are like mini-documentaries …

OB: Exactly! So I’ve never made a big-budget thirty-second Super Bowl spot, or anything like that. It’s always been more sort of short-form stuff. But one thing I learned doing that is commercial production value. I wouldn’t have the big budgets that usually came from working for brands, but those those clients still expect high commercial production value. So I learned, over the years, how to get a big cinematic look for little to no money. And I believe I ported that over to this film, as well.

HtN: You definitely did. 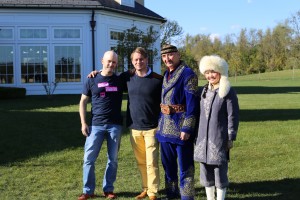 HtN: How did you come to this particular subject?

OB: I saw a photo essay, online, on the BBC. I believe it became the most trafficked web page of the year for the BBC, as a non-news story. You know, outside of hard breaking news, those photographs caught fire. And I was lucky enough to see them on the day they came out. They were taken by a young Israeli photographer, named Asher Svidensky, and he had stumbled upon Aisholpan when she was training with her father’s eagle, a few months earlier, and then it was finally the BBC that decided to publish them.

HtN: So – you have this subject that interests you, but then you’ve got to get people on board, and you have to get the funding. I read that you had Morgan Spurlock [director of POM Wonderful Presents: The Greatest Movie Ever Sold] as one of the producers, and Daisy Ridley [Rey in Star Wars: The Force Awakens]. Can you talk just a little about the process of putting that together? What came first, some footage you shot, or getting them on board?

OB: So I made the majority of the film with my own money. I spent my life savings on it, and I actually went into debt; I’ve never been in debt before…and I got about two-thirds of the way through, to just after the festival competition part of the film, and that’s where I was totally out of money – I mean, I wasn’t just out of money, but I actually owed money, at that point. It was clear that Aisholpan was going to go hunting with her dad. That was going to happen. So I had to find the money to get out there. And that was interesting, because the production schedule was kind of dictated by her coming of age. You know, I didn’t have the luxury of sitting around and trying to find money; it wasn’t decided on my terms. I had to just be there with the camera when she took these steps.

So I was cut together about 10 minutes of the footage – actually, the eagle steal…

HtN: And the “eagle steal” is when she goes into the nest…

OB: Yes. When she takes the baby eagle out of the nest. And I stitched those 10 minutes together and sent it in a link to Morgan Spurlock. A mutual friend had introduced us a few years ago and I had his email. And he called me back that day and said, “Look, I’ve never seen anything like this. How can I help you?” And up until that point I had been quite alone…quite depressed, actually. And I learned, doing this, that there is no heroism in trying to make a film by yourself. There are producers, and executive producers, and these support structures exist for good reason, you know…So the clouds lifted when he came on board. He got me financing; he got me place to edit; he was a fantastic champion for the project.

HtN: And how about Daisy Ridley?

OB: Again, because I was able to plug into Morgan’s machine, as it were…you know, he’s been selling films for a lot of years, since Super Size Me, and he’s got a great team at CAA [Creative Artists Agency], who helped us sell the film at Sundance, and Daisy Ridley is also on CAA’s books. So her agent showed her the film, just because she thought she’d like it, and Daisy called me the night before Sundance and said the same thing as Morgan: “I’ve never seen anything like this. How can I help you?” It was clear that she had been very moved by the film. I think, growing up, that she was very close with her father, and he was very supportive of her, and she was picking out all of these details – all of these corners of the film – that I thought I only knew or cared about, so she was clearly moved by it. And I had wanted to add a bit of narration, but I just didn’t have the right voice for it. She’s got an amazing voice.

HtN: That’s fascinating! So it played at Sundance without the narration?

OB: Yeah! I had cards, at the start. I wanted to bring the audience into the film and into this world, kind of like Ridley Scott does with Prometheus. Or like the start of The Shining, as well, when they’re coming in over the hills, or like Lord of the Rings, as well, where they do it, too. You know, there’s a bunch that do it. Instead, I was having to use these cards to orientate the audience. But having her voice, I was able to use some of these aerials I’d got, which I didn’t have a home for, yet, and just bring the audience into the Altai Mountains, while she educates you on why we’re there.

And I think the narration does a lot for the film; I think she lowered the average entry age for the film. Because if you’re a child, there are a lot of subtitles to keep up with, and if you’re maybe on the younger side, you can’t track along with all of those subtitles. So having her just come in at key moments – because there’s only 5 minutes of narration in the 87-minute film – just helps you understand, if you’re a younger child, that this is an important moment, here’s what you need to know. It’s like little handholds through the film, for kids. 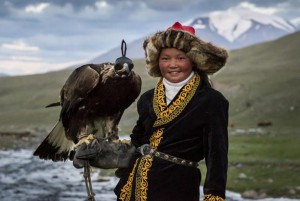 HtN: And it was important to you, given the fact that your main subject is a 13-year-old girl breaking gender boundaries, to have a lower-age entry point?

OB: Yeah! I mean, I want this film to be played in classrooms 20 years from now! I want it to be a staple. For boys and girls. I don’t think it’s just for girls.

HtN: Sure. I agree! So were there are any specific filming challenges that you experienced in Mongolia and Kazakhstan – in the freezing weather, for example?

OB: (laughs) Apart from not having a movie crew. There were 3 of us. Me, my cameraman Simon Niblett, and his camera assistant Ben Crossley, and then later – after we’d gotten some money – we had a sound man. But it was minus 50º, and nothing works at minus 50º. Everything breaks, you know. Your hands stick to the tripod; battery life is zero; LCD screens and the like…forget about it. You can’t get up into the air with the drone because the blades freeze. So we set aside 5 days to film that final act [of the hunt], but it ended up taking us 22 days, just because we would have to wait…we could only film like 2 or 3 hours a day…we had to wait for the sun to come up over the mountains, and it warm up to about minus 20º or minus 25º…

OB: (laughs) Exactly! A cozy minus 25º! (laughs for a long time) And then…(laughs again)…yes, so that was probably the hardest part.

HtN: So I know you shot on a lot of different cameras, including the Canon C300 and the RED Epic. Which one performs best in those challenging conditions? Or does one have different plusses and minuses?

OB: We used a bunch of cameras. We used the RED Epic, the C300, the Canon 1D, the Pocket Blackmagic, the Cinema Blackmagic, a GoPro, and a Sony a7S. I wish the Sony a7S had come out earlier – that came out halfway through my filming – and it’s fantastic in low light. That Mark II overheats, in interviews, but that Mark I, in low light … cracking camera. And I wish it had come out sooner, as I would have done more stuff at night if I’d had it. But the RED Epic is pretty bulletproof. It’s a pretty good camera in the cold. It held up well. The screen would go, when it was really cold, but the rest of it was pretty bulletproof.

HtN: Final question. You mentioned in the Q&A, after the screening, that there is an animated version of this same story in the works. Can you explain that further?

OB: So Chris Wedge, the guy who did Ice Age and Robots, saw the same photograph that I did, a few years ago, and he’s been developing an animated feature about Aisholpan and eagle hunting for a couple of years now. Darren Lempke [screenwriter of Goosebumps] is writing the script. And when the documentary came out, he [Chris Wedge] gave me a ring. I’m very happy it’s in his hands, because he’s very good, indeed, at what he does. And I think he wants to keep the core of Aisholpan intact. He wants a message of female empowerment; he wants her story at the heart of it. I mean, it will be different. Quite rightly, he said to me, “I’m not going to remake your film.” Nor would I expect that of him. So I’m very excited for where he’s going to take it and what he’s going to do with it. The more kids who see her story, whether it’s through the documentary or an animated feature, the better.

HtN: Well, I enjoyed the film, so thanks for making it.

OB: Thank you! It was lovely speaking with you.