A Conversation With Morgan White (THE SLIPPERS)

I met with director Morgan White on Sunday, March 13, 2016, to discuss his movie The Slippers, for which I also wrote a review. Here is a condensed digest of that conversation.

Hammer to Nail: So I read that you have been a cinephile your whole life, as have I. I’m curious, where would The Wizard of Oz rank in terms of childhood experiences of movies?

MW: Whoa, that’s tough. I will admit to something that I probably haven’t admitted to a lot of people, which is that I don’t really remember the first time I watched The Wizard of Oz. I remember watching it when I was a kid. I’m pretty sure that I watched it with my mom, at some point, just on TV, but it was never one of my favorite films. And I will admit that it still isn’t one of my favorite films. It’s a great movie. From a technical standpoint, it’s phenomenal. And for that, I admire it greatly, but no, it’s never been one of my favorite films. I don’t know where it would rank. I mean, Star Wars would be the precipice, or Indiana Jones, or something like that. Those are the films that I really grew up on and gravitated towards when I was a kid. But then when you get into Hollywood studio output, The Wizard of Oz is one of the tops of that. And so that was probably one of my first forays into that realm, and then, you know, Singin’ in the Rain came in, and all that. In fact, Singin’ in the Rain, to me, is one of the greatest films of all time. I love it beyond anything. I mean, Debbie Reynolds is a big part of the story that I told [in The Slippers] and if there’s a girl in the entire world that I would love to be with, it’s Debbie Reynolds’ character from Singin’ in the Rain. She is the most adorable, wonderful girl on screen that I have ever seen.

HtN: Yes, I would concur. I really like her in the film. Although my childhood crush for studio-era starlets was Shirley Jones in Oklahoma!

HtN: She is the one that I yearned for.

MW: That’s a great movie, too.

HtN: So that was my big musical favorite. But I also loved High Noon, growing up, because my mother rented a 16mm movie projector from the library and a print and we watched it for my birthday.

HtN: But, as with you, Star Wars and Raiders of the Lost Ark would be my big childhood films.

MW: Yeah, those just kind of made me want to be a filmmaker. But what’s interesting is that if you think about the reason why those films work, because of the nostalgia that they prey on, is because of all that previous studio stuff. So I guess in some ways, no matter what, that studio era influenced me just by the fact that it influenced the filmmakers that made those films.

HtN: Excellent point. Because Lucas and Spielberg were obviously influenced by those earlier films. So, how did you come to this particular story? It’s such an involved tale, with so many disparate elements. What led to what?

MW: So I read Rhys [Thomas]’s book [The Ruby Slippers of Oz], about five years ago. When the shoe sold at auction in 2011, it made national and international headlines, and I read the little blurb in the auction catalog – because I had always kind of followed those auctions in the sense that I was, like, how is that you can own this stuff? And I would just look at it and yearn over the fact that, you know, wouldn’t it be cool to own something? And I read the blurb about the slippers, and Kent Warner was mentioned and the fact that there are multiple pairs, and I thought, well, that’s really interesting, so I talked to my friend, who wound up being the editor on the film, and he said, well, yeah, there’s a book about all of this. So he gave me the book, and I’m not a fast reader, but I read the book in about a day and a half, and I just couldn’t put it down. It was a complete page-turner. And I realized, right there, this is too good of a story. I have to figure out how to make this into a film. Because I love the idea that it’s about something so innocuous that everybody knows, but nobody knows the real story behind them. And that’s just such a cool thing. I mean it’s so much fun to play in a world that people know about, and then peel back the layers to show somebody something that they had no clue existed. 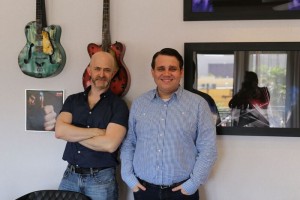 HtN: So how about access? Did you have any issues there, interview-wise, or footage-wise?

MW: Footage-wise wasn’t so hard. I spent a lot of time trying to collect stuff. So I became very obsessed with the idea that I should collect as much of the material that’s in the film as possible, because I’m making a movie about collecting. So a lot of the things that are in there come from 16mm prints that I bought, on eBay, or on the black market of 16mm-print collecting. Or I bought magazines and newspapers and articles and…whatever I could find on eBay. So in terms of that stuff, it was just me spending time looking for it. Access-wise, for interviews, I mean, everybody was pretty great. Michael Shaw, who was one of the owners of the shoes, he was a little bit complicated to get, because he’s a little bit complicated of a person…

HtN: That comes across in the film.

MW: Good. I’m glad. Because he’s really com … [laughs] … he’s something else. And, you know, we had to make him at ease…a lot…and go and meet him a couple of times before he would agree to do the interview. I think even when he did the interview, he was still wary of everything. Because I think he’s been burned a lot, and so he is wary of everything.

I tried as hard as I could to interview Debbie Reynolds. I wanted to interview Debbie more than anything else in the world, because I love Debbie, and I would have loved to have met her in person. And, you know, sadly, that didn’t happen, mainly because Debbie’s in her 80s, and it takes a lot for her to get out of bed and put on all of her makeup and everything to be able to do an interview, so I was fine with that. And in the end, it’s not the end of the world, because I would have only got Debbie Reynolds, the movie star, and what I wanted was Debbie Reynolds, the collector. And so I don’t think she would have allowed me into that world, whereas with Todd, her son, whom I did interview, he gave me Debbie Reynolds, the collector, and he allowed me to use a lot of their archive of materials for the film, and he really allowed me to show that side of her. The cool thing is that I did actually get to speak to her on the phone, and that was a tremendous experience. I can’t for the life of me tell you what she said, because it’s all a blur, but I will say that she sang to me. She just randomly broke out into song, and it was like a dream come true. 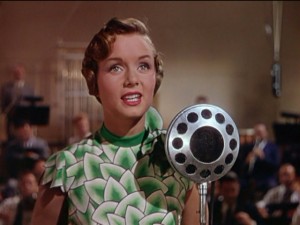 HtN: Debbie Reynolds and Judy Garland both have a very strong, for whatever reason, gay male following.

HtN: I’ve never entirely understood all the reasons, but more power to all involved. Debbie Reynolds has stated, in some interviews with her that I’ve read in the past, that she’s very proud of that following. Some of the collectors – for example, Kent, the costumer – in your film, though their sexuality is never explicitly mentioned, are gay.

HtN: I’m curious – because it’s such an interesting thing, that both Judy Garland and Debbie Reynolds have this fan base – if you thought of making that part of your story?

MW: We did discuss that, but that was kind of like opening up a can of worms that would be really complicated to completely explain. I’m not gay, and in fact most people who have owned the shoes are not gay, which might be a surprising fact to people…

HtN: But that would be an interesting twist, too…

MW: It is an interesting twist! But it was something that I never fully understood. So my editor – my friend who gave me the book – who is gay, he does understand that. He kind of explained it to me in the sense that, Judy Garland – and Debbie, as well – they’re powerful women who these guys grow up with, watching, so it’s like the first attachment to a powerful woman, to some extent. Especially with Judy. She has such a tragic story, and gay men love tragic stories, for some reason, and so that’s what draws them to it. It’s like their first perspective of that. But is an interesting part of the story. We just realized that it would be an add-on that maybe wouldn’t add anything and might actually detract from the film.

MW: Yeah, exactly! And then you’re talking about something that a little bit aside from the story that we were trying to tell.

HtN: I get that. I was just curious to know if you’d thought about it. OK – final question. Well, thank you very much. It’s a very interesting film!

OPHELIA
To Die, To Sleep