Having worked in the independent film industry for many years as an associate and executive producer (Kurt Cobain About A Son, Low and Behold, Beautiful Losers), Jared Moshé finally decide it was time to write and direct a film of his own. Though he and his team were working on a micro-budget similar to most festival-ready indies, that didn’t stop Moshé from realizing a longtime goal: making a full-fledged classic Western. Shot on 35mm, Dead Man’s Burden is a taut dramatic thriller set in the post-Civil War Southwest, in which the return home of Wade (Barlow Jacobs) stirs up trouble between his younger sister Martha (Clare Bowen) and her husband Heck (David Call). As the days wear on, layers of deception are rolled on like lead paint, before the truth is tragically unpeeled. In the days leading up to the film’s theatrical release through Cinedigm (it world premiered at the 2012 Los Angeles Film Festival), I spoke to Moshé about how he managed to bring such an ambitious, handsome production to life.

Hammer to Nail: Had you been wanting to make this movie for a long time and you got sidetracked with your work as a sales agent and producer, or did your immersion in the industry inspire you to go against the grain and make an ambitious old-fashioned Western? 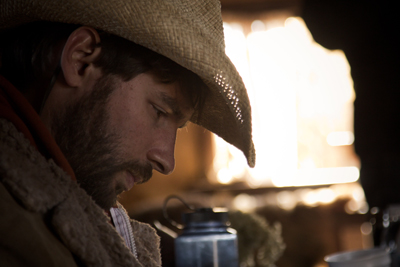 Jared Moshe: I would say it’s a bit of both. I really knew I wanted to make a Western when I made the transition into writing and directing. I didn’t have this story in my head, but I knew this was the genre I was going to work in. This story particularly was inspired by the 150th anniversary of the Civil War, which was on my mind a lot when I was writing it, and how those wounds still exist today. How we’re basically still dealing with the fault lines that were created back then. When I sat down to write it, though, I really approached it thinking about how you make a micro-budget film—as a producer and a sales agent, I had an understanding of the business side of film and what costs money. So, when I sat down to write, I limited myself to a certain number of locations, a certain number of characters, and tried to make a film that was scalable, that if I raised a million, five million, ten million, I could do it, or I could do it on a micro-budget, knowing that would be most likely.

H2N: But even if you’re playing it smart with regards to one contained location and a small cast, you’re still having to deal with, say, wardrobe, which automatically threatens to catapult you into a more daunting production dimension. I’m assuming that’s something you factored into your pre-pre-production?

JM: Yes. There were some things that I knew. One was that I needed to get my key cast and crew on board as early as possible. ‘Cause when we got down to New Mexico and started shooting, things would be rushed and we wouldn’t have a lot of time. So I wanted to be able to talk through everything and be on the same page with everyone for months before we even got to official prep. For example, you mentioned costumes. My costume designer, Courtney Hoffman, was the first person I brought on this project. And one of the reasons I brought her on is she is a Hollywood costumer. She has experience doing period films. She worked on Snow White and the Hunstman, which is period fantasy but it’s still period in its own way. She worked on Water For Elephants. She understands that creating a costume for a Western, which is more than just creating an aesthetic, it involves a sense of feel, what the fabric was made of. And she had the relationship with the costume houses to get us that deal, ‘cause for her this was her step up, this was her chance to go from being a costumer to being a costume designer. I did the same thing with the production designer, Ruth De Jong, who is an amazing art director for Paul Thomas Anderson and Terry Malick. This was her opportunity to really show off what she can do and pull in favors to bring that verisimilitude to the world.

H2N: Speaking of Malick, you shot this motion picture on film, yet unlike him, I am pretty sure you didn’t have endless rolls to burn through. Did you do strict story-boarding or did you allow for the location to inform how scenes were shot?

JM: We had a shot list that I had come up with. I pulled stills and references from a lot of other Westerns for us to work with. I think we hired Rob [Robert Hauer] in July. I got my shot list to him at the end of that month. He and I sat down, and we would go through and do overheads of each location, so that he and I had a very clear understanding of how I wanted to shoot it and how he wanted to shoot it. So there was a lot of preparatory work. But then when we got down there, we were willing to look at the location and let the landscape of the world we were in and the sunlight tweak our vision. We knew what we wanted to accomplish but how we were gonna accomplish it might change.

H2N: When it comes to the actors, pretty much everyone looks extremely assured on horses. Did that skill factor into your casting?

JM: Yeah. Barlow and David and Clare all had experience on horses. You ask actors, “Do you have experience doing X?” and they’ll say they have experience doing X. So we had to dive in a little bit more with questions about their life. Now luckily, I had a really good relationship with Barlow and he was very honest with me, and I knew he had taught [horseback] riding. David and Veronica Nickel, my producer, also had a really strong relationship and he was very straightforward with us. The hardest thing was when we were casting for Martha, and we were bringing in actress-after-actress-after-actress for that role, and they were all like, “Oh yeah, I have horseback riding experience,” and you never really knew when you’re doing auditions if they’re [being honest] or not. But we ended up hiring Clare, who we found on Vimeo link that was sent to us by her manager after going through about 40 people. And I was like, “Well, I really like her, she’s perfect for this role, but I need to speak with her on Skype ‘cause I need to get a sense if she a) can deal with a low-budget production, and b) has horseback riding experience. When I started talking to her about horseback riding she said, “I grew up mustering cattle!” And I was like, “Okay, I’m not worried about the horses.” [H2N laughs] In fact, with Clare, every other actor would be hanging around set, you know, when they weren’t shooting. We had to keep an eye on Clare, ‘cause she would go off bareback horse-riding with our wrangler when they weren’t being used. [H2N laughs]

H2N: We’re talking about this being a small production in budget though clearly not in scope. Was the crew, in fact, stripped down, or did you find a way to get, say, interns or volunteers to help pad things out when necessary? 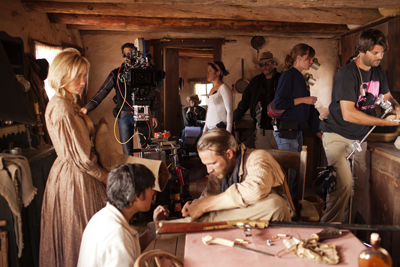 JM: They ranged in experience, but they were all really focused on what they were doing and really positive and really wanted to work. I was really impressed with the crew in general in New Mexico. They went above and beyond for us.

H2N: The script is so well layered and sharply orchestrated with regard to how information is parsed out. How long did it take you to get it to a place where you felt confident moving forward with the production?

JM: I wrote the script very fast. I wrote the first draft in three-and-a-half weeks, and that was the version that went out to a lot of people and we were able to lock in our initial financing and that was the version [that secured] Barlow and David and some of our crew. And then I started revising from there. My strategy was, I was happy with that first draft, and I wanted to get all my actors on board and do the revisions with them in mind—knowing who my Martha, Wade, and Heck were gonna be. And so over the summer, as I gave the actors books to read and we talked about the characters, I was constantly revising the script, tweaking scenes, how they’d react to things, dialogue, and some smaller structural things. Then, when we got down to New Mexico, we had like three days of heavy rehearsal, and that was when we changed a bunch of things about the ending. Like the gunfight between Heck and Wade was much simpler originally, and then we worked it through with the actors and figured that the characters would react differently than how I had set them up.

H2N: Having a vocalist as an element of your score is a somewhat atypical choice. I’m wondering at what point did you decide to do that? 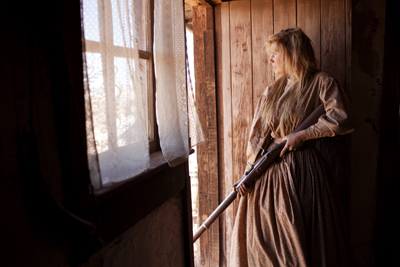 JM: My composer Scott Salinas and I, he’s been a friend of mine and we’d been trying to find something to work on together. And when we started working on this film, we wanted to have themes for Wade and Martha. We wanted to find a way to have those scenes be as bold and strong as they needed to be, but also simplified so they could basically be broken down to one instrument that would really capture the essence of that character. So for Clare’s theme, we were really inspired by Once Upon A Time In The West, and the theme for Claudia Cardinale in that movie. But instead of a vocalist that sounded operatic, we wanted a voice that almost sounded like a girl in pain, who was crying out for help, who had a voice inside her that she couldn’t always express. And that’s when we started looking for the right vocalist that could actually give us what we needed. That took a bit of work, bringing people in. Scott wrote something that was the most difficult for a singer to hit—all the notes and the transitions. That’s when we chose someone [Neara Russell] who both had a beautiful voice but would hit certain things almost imperfectly, and we felt that imperfection was really fantastic for Martha.

H2N: Speaking of imperfections, I guess it doesn’t matter how you answer this, but the blood splashing on the lens on the second-to-last shooting, I kind of hope that was a happy accident that you got excited about in the edit?

H2N: And you get out of it really quickly, which is what’s so great about it. It technically does break the fourth wall in a way that you previously haven’t, but I believe now more than ever that when something like that happens, you have to embrace it.

JM: I think you have to embrace those things, you know? I agree with you 100%. It’s the first real moment where you see blood in the movie, and I think it adds a jolt in a great way.