Fb. In. Tw. Be.
Interviews
SLIDESHOW

A Conversation With Isabelle Huppert And Claire Denis (WHITE MATERIAL)

Isabelle Huppert and Claire Denis are two contemporary French cinema legends—fearless women taking on demanding projects that delve deep into the human psyche. Huppert has unflinchingly tackled 90 of some of the fiercest and most difficult roles for an actress: an incestuous mother, a prostitute, a famous abortionist, a girl that murders her parents…the list goes on. Huppert once said, “Acting is a way of living out one’s insanity.” Indeed in her films she accomplishes this feat with such ferocity, coupled with vulnerability, that makes her work so startling. Her no frills approach to becoming these characters doesn’t involve method acting (thank god!) or complex research. Before filming White Material she didn’t spend months with coffee plantation owners, nor live in a country rife with civil war; she simply put on the shoes of her character Madame Maria Vial: a simple woman living in a complex world that is crumbling around her as she attempts to cling tightly to it.

White Material, which premiered at the 2009 Venice Film Festival, is Denis’ 19th film—adding to a cohesive and profound body of work that spans continents. Especially the continent of Africa. Denis, who grew up in Cameroon, has used Africa as a setting and a character in her films Chocolat and Beau Travail, and now she has returned after ten years with White Material, which tells the story of a French family living in Africa on their Arabica coffee plantation. As civil war breaks out in the country, all the wealthy people and foreigners flee except for Madame Vial, who is determined to finish her coffee harvest. On Friday, November 19, 2010, Huppert and Denis’ first collaboration hits New York theaters. Hammer to Nail took part in a round-table discussion with Denis and Huppert. 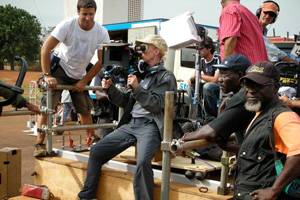 Hammer to Nail: Isabelle, what drew you to working with Claire? You have worked with some amazing directors—was it a specific piece of her work that drew you to her?

Isabelle Huppert: Well, as you said having worked with such amazing directors, I just wanted to work with another amazing director! [both chuckle] I’ve known Claire for years and I think we always wanted to work with each other. It was all very natural. I asked Claire first if she would consider making a film out of Doris Lessing’s book The Grass is Singing and Claire liked the idea of making a movie about a white woman in Africa but she didn’t want to do that book because it was a bit problematic. She has the idea of this one very active character. A woman who fights to stay in her country.

Claire Denis: It was interesting for me because Isabelle enabled me to imagine the situation. It wouldn’t have been so easy if she hadn’t given me permission and freedom to dream about something. She gave me possibilities. The first scene I imagined and told to Marie N’Diaye, who co-wrote the script, was Maria seen by soldiers in a helicopter as a small figure, lost in a plantation. She’s very fragile and exposed. Then, we go down to the earth with her, as she rides a motorcycle. 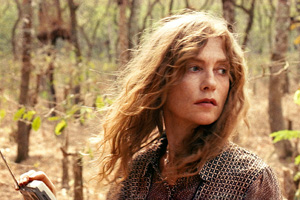 H2N: There aren’t a lot of female protagonists like Madame Vial. She is fearless. She sleeps outside at night amidst a rebel war, goes everywhere alone, and never looks scared. I found it refreshing to see. The first scene in the film makes you question whether she is going to be someone you like.

Claire Denis: One thing I saw in coffee plantations I visited with Marie was a young man who took his motorcycle and raised his arms and said, “Every morning when I go on my motorcycle, I feel free and strong.” I like the way she’s seen by a soldier as a fragile victim and then when she gets on the motorcycle, she’s obviously not a victim. There’s a duality there. There are many shots where a tiny figure is surrounded by the landscape or other people, and close-ups when she’s driving or working or thinking. There, we can see she’s tough and doesn’t want to submit.

H2N: I couldn’t judge her character—even though sometimes she made questionable decisions, but I rooted for her throughout the film. She was a powerful force, but with vulnerability. [To Isabelle] I believe you bring that to a lot of your work. But this character is quite different. How did you find who she was?

Isabelle Huppert: I found it through a very physical approach to her. There was no strategy, no complexity, and no calculation.

H2N: She is very physical—on a tractor and traipsing through fields…

Isabelle Huppert: It’s that simple for her. She just needs to go somewhere—with her stubbornness she doesn’t want to give up that land. And the need to stay focused and legitimate—she doesn’t try to disguise what she wants. Claire isn’t trying to possess something. Maria doesn’t even feel like the land is hers. She feels like she belongs to the land. But not in a greedy way—she belongs there because she works there and loves it there and she is a human who has created a life there. 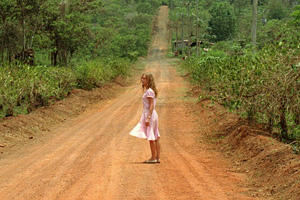 Claire Denis: It’s very feminine. We used color to speak about the character without psychology. There is a yellow dress at the beginning, and the second dress is pink. We tried a turquoise dress, but it didn’t seem to belong to the story. The others fit it. The camera lingers on the pink dress because she puts it on to seem strong. It’s like armor.

Q: The beginning of the film shows the fate of the Boxer [a Che Guevara-like revolutionary played by Isaach de Bankolé] and Maria’s son. Our first glimpse of Maria isn’t her beginning or end within the narrative. What led you to make that choice?

Claire Denis: The script was written in chronological order. It began with the helicopter scene. While we were working on the script, I liked it like that, but when we shot the scene where Maria is running to catch the bus, I had a strange feeling that it couldn’t be the beginning of the film. I was late on schedule, but the bus scene was the only moment where Maria is alone and moves to act as if she’s trapped. She’s away from the plantation and has no power. It was fast, only taking two afternoons to shoot. It felt like the center of the film, as she suddenly realizes something is happening.

In the editing room, I tried chronological order but I already know I’d dislike it. To have Maria appear in broad daylight, already lost and too late, it was necessary to have a terrible scene at night, as if to prepare for her entrance.

Q: The film takes place in an ambiguous time and place. The one thing we get is that the music heard is ‘70s and ‘80s reggae…

Claire Denis: If you listen to any radio station in Africa, reggae is the basic music. Even reggae from the ‘60s is heard every day on the radio still, as if it was a source to come back to and remember. In every country in the so-called Third World, reggae music is always there, since the end of the ‘60s. The film doesn’t take place in the ‘70s because you hear the song “Night Nurse.” But if you go to Nigeria, you will still hear it now. 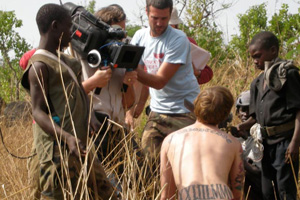 Q: You all shot in Nigeria but the country is never named in the film.

Claire Denis: It’s not my intention to be vague. The film is inspired by real events in the Ivory Coast. Of course, it was impossible to shoot the film there because a near-civil war is still going on there. I thought it was better to shoot in a country at peace. Also, I wanted the child soldiers to be played by normal children who go to school. I think it’s necessary for a film containing certain violence. I didn’t want to write, “This story takes place in 2003 in the Ivory Coast” over the credits. Anyone who knows Cameroon could recognize that’s where I shot it. The border of Nigeria and Cameroon is very visible. Many times at screenings in France, people recognized the locations. If I had claimed it was set in the Ivory Coast, it would have been a lie. Otherwise, I would take the risk to shoot there.

Q: Shooting in Africa anywhere I imagine is a bit different than shooting in France or in the US. Isabelle—what was it like to work with Claire there?

Isabelle Huppert: Well, she always tries to create a vision. On one hand, she’s searching for life in something dark. But on the other hand, she’s easy to work with. In order to achieve simplicity, it requires a lot of hard work. You can imagine that where there’s not a classical storyline and psychological reasons, it’s eventually going to be all put together, but on set, it felt like a series of fragments. As an actor, I never felt lost. You follow what you believe is her thread. As long as you feel that there is a thread, no matter where it takes you, it’s fine.

Claire Denis: Of course, I might look like a very anxious person, but there’s something very strong when Isabelle is present. For me, she’s completely there physically. Everything was physical, during the shoot. It’s not the kind of set where you watch it on a monitor. Everyone is on the move, with the action. If I remember the film, although we had trouble with the schedule and the fact that the plantation was three or four locations put together, the thread was never a problem. If I think of the film, I remember when we walk by the tractor when Isabelle is driving it, with coffee cherries behind it. This energy creates a sort of joy, even if there are problems with the schedule.

Isabelle Huppert: I like the idea of knowing that I’m going somewhere, but feeling at sea. You know that you’re going near the horizon, but you can’t see the horizon. I like this feeling of being lost and going into Claire’s vision simultaneously. I need to trust her; then it’s a very nice feeling.