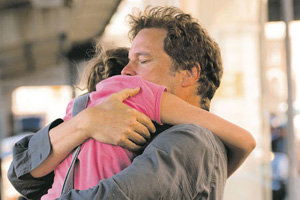 A Summer in Genoa (eOne) —I have  no idea what happened with this Michael Winterbottom film, which world premiered at the 2008 Toronto International Film Festival under the title of Genova, and is now being released on DVD two-and-a-half years later under the new title A Summer in Genoa. I vaguely recall distributor problems, but I guess none of that matters now. While A Summer in Genoa is clearly Winterbottom’s nod to Nicholas Roeg’s Don’t Look Now in the same way that his The Claim owed a great debt to McCabe & Mrs. Miller, this film is more of a haunted drama than a haunted thriller. It also has, without question, one of the best child performances that the screen has ever seen. I don’t know how she did it—or what Winterbottom did to help her along—but Perla Haney-Jardine’s portrayal of a young daughter who is still grieving over the loss of her mother is nakedly, excruciatingly raw. While I quite liked A Summer in Genoa across the board, Haney-Jardine’s performance makes it mandatory viewing. Buy it on DVD

Ricky (MPI Home Video) — Francoise Ozon has made so many different types of movies, but this one might just be his most sweetly eccentric. Buy it on DVD

New to Blu-ray Pick(s) of the Week

Farewell (Terra) — Buy it on DVD