Tony Robbins Is Definitely Not My Guru 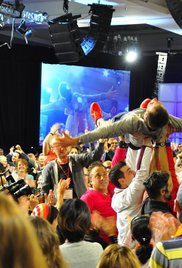 Seeing Tony Robbins: I Am Not Your Guru at the Full Frame Documentary Film Festival in April marked the first time I ever walked out of a Joe Berlinger film. I’ve been a fan of the Paradise Lost trilogy co-director (along with the late Bruce Sinofsky) since discovering the team’s 1992 doc Brother’s Keeper decades ago. And in fact, my fleeing from the theater 40 minutes into the sold-out screening of Berlinger’s behind-the-scenes look at the non-guru’s yearly “Date with Destiny” mega-seminar had nothing to do with the skilled documentarian’s filmmaking.

It had to do with his subject. Tony Robbins, in case you’ve been living under a rock, is a superstar in the motivational speaking and self-help world. His Wiki page cites his naming to the Forbes “Celebrity 100” list back in 2007, the year he earned around $30 million. Though his subject did not attend the screening, Berlinger did, joking in his intro that this was not “another feel-bad Berlinger film,” and further urging us not to sit there “waiting for the other shoe to drop.” Unfortunately, I found myself praying for the other shoe to drop.

For if the (tony Boca Raton) seminar attendees captured in Berlinger’s cinéma vérité flick are any indication, Robbins is indeed an inspiration – to wealthy white folks with First World problems everywhere. For me, watching the film felt like being trapped at a high school pep rally with the loudmouthed football jock rallying the troops. I felt nauseated, motivated only to get the heck out of there. I began to wonder if Berlinger purposely set out to make a “critic proof” film, a form of film critic torture, by choosing a subject that he knew would be like nails on a blackboard to often-jaded writers. Robbins’s Socratic method masquerading as manna from heaven was simply infuriating to me. 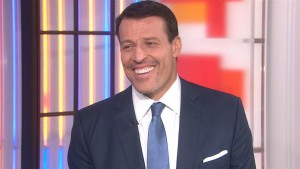 Yet in a sense I suppose Robbins’s motivational magic worked as advertised. Perhaps merely witnessing the sight and sound of the man somehow revealed who I am. And Berlinger, who himself attested to the power of the seminar, did appear much lighter and less stressed out than when I last saw him in person years ago at the International Documentary Film Festival Amsterdam (at a screening for the final installment of Paradise Lost). Maybe his attempt to make “a music doc for the emotions,” as he also put it in the intro, was sincere. If Tony Robbins: I Am Not Your Guru is a music doc, though, it was the equivalent of listening to death metal full blast – relentless torment for me.

Tony Robbins: I Am Not Your Guru premieres Sunday, May 8th at Toronto’s Hot Docs Film Festival – with both director and subject in attendance.

A Conversation With Joe Berlinger (UNDER AFRICAN SKIES)