A morning sunrise. White dust. A man walks through deserted streets, crumbling adobe huts behind him, carrying a worn pickaxe and shovel. There are no sounds but those he makes while sharpening the edges of his tools, plus the gentle, eerie hum of droning chords on the soundtrack, followed by his own voice, explaining how the land we are about to see once caught Neil Armstrong’s eye as he gazed homeward from the moon. This is the Salar de Uyuni – the world’s largest salt flats – in Bolivia, where our narrator, Moisés, has long done backbreaking work to harvest its saline deposits, as did the generations before him. This tradition, however, is about to change.

Where there’s salt, there is also, apparently, lithium, a key component in the world’s increasingly important rechargeable-battery technology. As we learn in the film, Bolivia has a long history of foreign powers stealing its natural resources, and the government of President Evo Morales is determined, this time, to maintain control over what could, in the words of his PR machine, make Bolivia the “Saudi Arabia of the 21st Century.” Unfortunately, as Spain once was to the indigenous natives of the region, so now is Comibol – the state-run mining company in charge of extracting lithium from the salt flats – to the residents of Colchani, Moisés’ hometown. 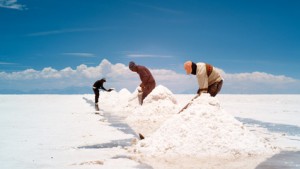 The reality is more complicated than a mere “us vs. them,” however, as many Colchanis welcome change, including Nelvi, Moisés’ wife, long unhappy in her bare-bones village. She has big dreams of becoming a hairdresser in a big city. Nico, Moisés’ older brother, quickly pivots from his salt-processing business to tourist hostels and trinkets, selling the equipment on which Moisés has long relied to refine the raw materials he brings in from the field. And although the question looms large of who, exactly, will benefit from the supposedly great riches to come, what is not in doubt is that Moisés – the last of the salt harvesters, or “saleros” – gazes mournfully on the now-spoiled beauty of the Salar, unsure of what his future holds.

The debut documentary feature from director Mike Plunkett, Salero is both elegy and reportage, a combination of sublime visual grandeur and prosaic fact-filled journalism. All the while awestruck by sumptuous images of breathtaking landscapes – juxtaposed with no-less beautiful close-up shots of human skin burned and wrinkled by the sun – we find ourselves immersed in the nitty-gritty details of a region and country in flux. Moisés, the working-class philosopher whose melancholy journey away from his roots forms the spine of the film, is an engaging, if tragic, companion through the narrative space of this rich and complex metaphor for the challenges faced by all peoples and nations in our modern world.