Counting is a difficult film to pin down. But that’s precisely what makes it so engaging. All films are art to some extent (for better or worse). But typically, the narrative is the main focus. In Jem Cohen’s latest film, the art is the focus, made all the more so by the lack of narrative and the frequently incongruent audio. Shot primarily in New York City, Moscow, Istanbul, and Sharja, Counting often feels like a travel diary wherein the traveler is the camera itself and Cohen is a ghost who pops up from time to time.

The film is broken into 15 parts, each beginning with a title and ending with the date and city in which the footage was shot. Sometimes the segment has a postscript such as in part 2: “A Day is Long”… “But a lifetime is short.” The titles are a mantra – something on which to ruminate or puzzle over during the segment. You begin to notice recurring motifs such as travel (planes, trains and automobiles) – but always with the camera trained out the window to catch the passing scenery; frequent shots of new construction contrast with neglected buildings and sidewalks; people hustle and bustle through the streets, passing static vagrants and paying them no mind; nature pushes through concrete, fighting for the right to exist; cats abound.

At times, images seem random and insignificant, but to another viewer, they might be loaded with meaning. For me, Counting is a constant reminder of the cyclical nature of life. Despite all our advances in technology, we can’t stop death. But re-birth is right around the corner. The city is always moving forward because it must – because time doesn’t look back.

Cohen does pepper his film with political commentary. A shot of graffiti reads, “Trump is a monster.” A crowd chants, “I can’t breathe” in protest to the murder of Eric Garner. Most pointedly, Cohen plays audio from an N.S.A. wiretapping hearing over shots of people on their cell phones. 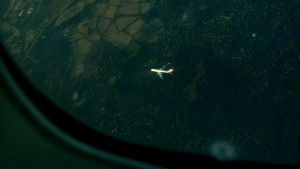 You probably won’t be on board with every moment. For me, one lengthy shot of a plastic bag billowing in the wind irritatingly recalled Wes Bentley’s pretentious character from American Beauty. But a moment or two later, I was right back in it. It helps that Cohen has a remarkable sense of composition. You could pull a still from practically any shot in the film and have something frame-worthy.

The term “documentary” sometimes loses its meaning, especially during films with a clear agenda or stance. There, the line between document and propaganda become blurred. Counting is about as close to an actual document of life that one can get. Sure, Cohen has edited the footage, chosen the order, told us what to notice, but apart from a few moments of pointed visual and auditory juxtaposition, he offers these images without commentary. If we wanted to send something off into the cosmos to show aliens in far off galaxies what life is like on Earth, this is a pretty accurate depiction, at least for those who dwell in urban centers. Though I’m not entirely sure it would make them want to visit.