Fb. In. Tw. Be.
Best of
EDITORIAL
Film Festivals
SLIDESHOW

That’s A Wrap on the 2016 Bermuda International Film Festival

The 19th Bermuda International Film Festival, one of only four truly independent film festivals in the world, came to a close Friday, 11 March with probably the most laid-back and informal closing ceremony in the history of closing ceremonies. Winners of the Global Shorts competition were announced at a small, disarmingly relaxed gathering of filmmakers, festival luminaries and VIP guests at the Bermuda National Gallery in Hamilton, the island’s capitol. Wine was sipped, canapés were nibbled and, as with the festival as a whole, an atmosphere of cozy conviviality prevailed.

The Grand Jury Prize went to New York director Keola Racela’s Two Sisters, the beautifully shot and acted, heart-rending story of two sisters on a perilous journey to escape from North Korea. In the words of Jury President Chloe Roddick: “A concise and tightly focused short that masterfully tells a story that is both accessible and personal. Bolstered by exceptional performances from its two young actors, and excellent photography, the film is compelling, maintaining a sense of claustrophobia and tension as it explores the relationship between its two central characters.”

Winner of the People’s Choice Award was Toby Fell-Holden’s Balcony, a timely mini-tragedy featuring an absolutely astonishing performance from Brit actress Charlotte Beaumont as an abused adolescent forging a fateful relationship with an Afghani refugee.

The first of three Special Jury Prizes was awarded to Guillaume Renusson’s All Cats Are Pink In The Dark, in which an awkward Parisian teen has a portentous encounter with a flamboyant drag queen. “Elegantly narrated,” said Roddick, “with a sense of humour, the film avoids cliché and isn’t afraid to take things to an unexpected place.” 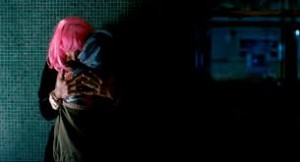 The second went to Patrick Vollrath’s Oscar-nominated Everything Will Be Okay, an emotionally harrowing portrait of obsessive paternal love. “A film that masterfully keeps control of an emotionally complex narrative, building to a powerful and unexpected climax.”

Last but certainly not least, the Jury Prize for Directing was scooped by Helen O’Hanlon for her marvelous guide to unleashing your dark side – and this correspondent’s favorite film of BIFF 2016 – How To Be a Villain. “An ambitious short that playfully combines complex aesthetic style with a tight narrative, excellent performance and impressive technical skill. An original, entertaining film.”

After a screening of all five winning films, the festival officially closed with a gala presentation of Xavier Giannoli’s film Marguerite, starring Catherine Frot and loosely based on the life story of tin-eared socialite and would-be opera singer Florence Foster Jenkins.

Unofficially, and befitting Bermuda’s well-deserved reputation for hospitality, it closed several hours later in less decorous, rather more lubricated circumstances. Here’s to BIFF 2017, and another Island-based showcase non-feature-length movies. Or Bermuda shorts, for short. Not to mention, of course, another thoughtfully curated (and manageable) program of features and documentaries, plus industry forums, master classes and educational events.