(Having been genuinely moved by filmmaker Noah Buschel’s recent piece at Filmmaker Magazine titled “The Loneliness of the Long Distance Filmmaker,” we were thrilled to receive a new batch of essays from Buschel himself, which we are very proud to be publishing at Hammer to Nail. While I had planned on spacing them out, this one seems too timely to sit on—not to mention the fact that Buschel has expressed my own feelings infinitely better than I ever could. This is some serious truth. — Michael Tully) 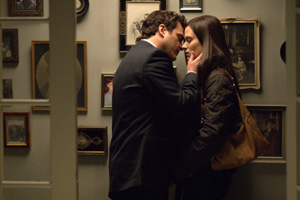 I know it’s silly to even lament the Oscar nominations anymore. Seems just about everyone stopped taking The Academy Awards seriously a long time ago. Whether it was Forrest Gump beating Pulp Fiction, or maybe when Crash won. Everyone has his own moment when he realized The Oscars were a bad joke.

Still, it hurts a tiny bit to hear that Joaquin Phoenix wasn’t nominated for best actor this year. His performance in Two Lovers was startling. Avatar didn’t give me hope for the future of movies—Joaquin did. Even if he is retiring, which I wouldn’t bet on.

I must confess I am one of those moviegoers who was hit hard by Heath Ledger’s death. No, I don’t have The Joker tattooed on my arm as some jokers I’ve seen. And it wasn’t even that movie I cared about. It was Ledger’s Ennis Del Mar in Brokeback Mountain. Somehow, in an age where everything’s moving faster and faster, Ledger slowed things down to the point where you could feel the beautiful lineage and tradition of screen acting. You could see Brando and Paul Newman and Sean Penn, but you could also see expansions and variations on those classic actors. It was old and new at the same time. And it tore one’s heart out. 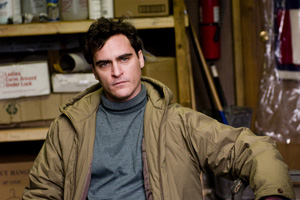 Joaquin Phoenix as Leonard Kraditor in Two Lovers is another one of those essential performances that happen very, very rarely. Much like Ledger, Phoenix is giving you archetypal stuff while throwing new kinds of curves. There’s some Jack Lemmon in The Apartment. There’s some James Dean. There’s even some Chaplin as he follows Gwyneth Paltrow up to the subway platform.

But more than all that there’s this new kind of acting. A kind of acting where Phoenix is a different person from scene to scene. And I don’t mean in a LOOK AT ME performance art way, like Nic Cage in Bad Lieutenant. I mean in the way that we all are so different from moment to moment, hour to hour. Phoenix captures this flux on screen in a subtle but mind-blowing way. It’s almost too good—you start to wonder if he’s fucking up. One scene he’s yelling at his mom, next he’s laughing, next he’s deathly still, next he’s rapping. And less than showing us that this is a manic and disturbed character, he shows us ourselves. Yeah, that’s kinda what my day is like too. I’ve just never had a mirror held up on a big screen to let me see it. It’s one of the most natural and real performances I’ve ever seen. In fact, you couldn’t even really call it a performance. When he’s on the train with Paltrow, as good as she is, you see one actor working and one actor not. And isn’t that who the best actor award should go to? The actor who found a way to go beyond acting? Or under it? Or around it? Or whatever the hell he did.

Phoenix reminds you of your friends. Oh there’s my pal Dave. Or that’s Dave’s little brother, Zach. Or there’s those guys from Brooklyn I used to play basketball with. Or there’s that crew from the Deli. Oh, and there’s my dad when he was younger, walking around Philly, obsessing about my ma. And then maybe, if you’re like me, you start to cry a little. 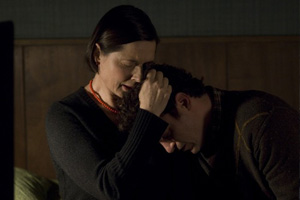 Phoenix’s heartbreak in Two Lovers is not of the cute Cameron Crowe unshaven pizza box variety. It’s the kinda heartbreak that seems like his heart might literally break. Like, his aching might literally kill him. And somehow, strangely, this is comforting. Maybe it’s like Leonard Cohen’s Roshi said after listening to an album of wrist-cutting ballads from the poet: “Write sadder songs.”

Anyways, give the gold guy to Jeff Bridges—you can’t go wrong with Bridges in any year. But it’s just kinda funny that a truly monumental performance happened and hardly anyone noticed. Maybe it happened too early in the season. Or maybe James Gray’s lovely film was just too modest and quiet (the film, the director, and Vinessa Shaw all deserve nominations.)

Or maybe, just maybe, after Heath Ledger and River Phoenix and Joaquin’s latest (to some) disturbing behavior, maybe people don’t want to open themselves up to shooting stars. Maybe everyone is too raw to celebrate the kind of pain that is most definitely in Phoenix’s Two Lovers work. Maybe they’re scared that if they do, they’ll have to say goodbye to another whiz kid soon. Be hurt all over again.

Hopefully this is not the case. Hopefully Phoenix will be around for a while and rap or act or do nothin’. Do whatever he wants. But the future doesn’t exist and can’t be predicted. I just know the compassion Phoenix shows in Two Lovers is so great, so big, one can only express one’s gratitude right now.