“Revitalizing the Cinematic Landscape in Camden, Maine (Followed by a post-festival conversation with Ben Fowlie)”

Last week, Camden, Maine’s annual documentary film festival, CIFF, founded by Ben Fowlie and Leah Hurley and now in its fifth year, screened 28 feature documentaries and 30 short documentaries to eager crowds intermixed with industry folks from PBS, HBO, Sundance Institute, LEF, and Tribeca/Gucci Fund. Included among the festival was the inaugural Points North Documentary Film Forum that connected audience members to filmmakers, DIY entrepreneurs to funders, all in a relaxed but packed setting. Indeed, festival participants, filmmakers, and critics have enthusiastically touted Camden’s intimate feel; much attention has also been paid to the local community’s warm welcome of the documentary festival itself. Screenings I attended were either sold out or near capacity—even weekday afternoon screenings. Diverse programming, committed audiences, selfless volunteers, and of course locally grown food (and hand caught lobsters!) by local families served to filmmakers and guests are just a few reasons why Camden has emerged as top-notch festival, dedicated to showcasing a passion both for the films and for taking care of the filmmakers who make them.

The festival’s growing pains have been surprisingly minuscule. The driving time from Rockland’s Strand Theatre to Camden’s festival headquarters is about 15 minutes. Free shuttles transport people back and forth between the two screening venues (although it’s sometimes difficult to leave one film and make it across town to see another in time). The drive into Camden itself takes about two hours from the Portland airport, but the dazzling scenery is well worth the trip.

In fact, the scenic landscapes and the sounds of rolling streams that abound in this walkable town are just as cinematic as the films being shown. “Look, you can’t see where the sky ends and ocean begins,” remarked Dominic Musacchio, the festival’s Points North coordinator, while pointing to a potential outdoor screening venue, set against a backdrop of mist rolling over the rocky valleys of the coast. 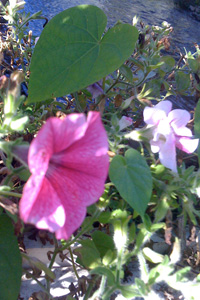 Appropriately, the overarching theme of this year’s festival takes a cue from the same poetic scenery in which Camden finds its heartbeat. Preferring artistry and craft over dogma and instruction, Camden’s programmers selected cinematically luscious films such as October Country, Because We Were Born, and Beauty of the Fight. The power of these profoundly crafted stories resonated and moved audiences beyond their social messages. Conversely, Camden devoted two sidebars this year called “Gone Green” and “Made in Maine” for films such as What’s Organic about Organic, A Chemical Reaction, Crude, and Robert Stone’s closing night film, Earth Days. Camden finds its lyrical balance by dancing on this tightrope between poetry and social responsibility, and the town’s intrinsic mixture of beauty and social commitment proved deeply moving in its own right.

All weekend long, I happened across small groups of people in the streets and coffee shops, arguing and debating the films they’d just seen. Often, the filmmakers mingled with them, and it was refreshing to discuss storytelling approaches with artists who care about discussing its craft. Likewise, it was invigorating to see that more than a third of the films weren’t selected from higher profile festivals and that someone from nearly every film was present to talk after the screening. Indeed, each film chosen for the festival fit into the themes the programmers had lain out for the year. Hopefully, the programmers at Camden will maintain this integrity and remain committed to choosing films that resonate and resound both with their specific selection criteria and with the audiences. The only way Camden can internally fail is if it severs the very roots and people that nourished its growth in the first place. “Is it really ending?” one filmmaker proffered to founder Ben Fowlie on the last day of the festival. “No,” he replied, “it’s just beginning. Wait until you see next year.”

How many tickets were sold during this week’s festival? How many people attended the Camden International Film Festival?

We sold just over 4,000 tickets to this year’s festival and closer to 5,000 people attended. This number includes pass holders and individuals who attended either one of our parties, art installations or other special events. Pass sales were up tremendously from prior years, which to me is a very good sign! We had actually dropped our pass prices this year to make the festival more affordable for individuals traveling from away and also because of the current economic climate. This helped ensure that our audience was energetic, vibrant and interested.

What was this year’s high point and low point for your festival?

The high point of the festival for me was realizing the number of filmmakers and industry guests we brought in (well over 40). This is a major jump from previous years and nearly every single film had a representative or two for a post-screening Q&A. CIFF is getting known for our engaged audiences and its wonderful to be able to connect our audiences with such talented artists in such an extremely intimate environment. There were a number of guests that we invited this year that have played a major role in my development as a programmer, from AJ Schnack to Peter Davis, it’s a real honor to be surrounded by artists that love documentary as much as I do.

This year was pretty magical, and aside from the annual tech mishap I’m hard pressed to find a real low point. They are there and I’m sure over time I’ll realize what they are, but for now, I’m riding high!

How has your festival improved over five years and how can it improve?

Our fest has improved in a number of ways. The biggest improvement of this year was the talented staff we had working with us: over 20 with nearly 50 volunteers. In past years our crew has been small, but this year with the help of our producer, Leah Hurley, we were able to put together a crew of creative individuals who all wanted an opportunity to create something new and unique. A good portion of this staff I’ve known since I was a kid, which is pretty great. We all went to school together, have gone our separate ways but this year we used this weekend to all come together, share our talents and put on a show that would really help put CIFF on the map. We’ve found our team and we are all excited about what we can and will do for next year!

We also need to improve in a number of ways. With growth comes more organizations and we need to find a way to keep the momentum going throughout the year. Our attendance numbers were higher this year, but with all the great press we’ve been getting about our event, we need to really focus on building a sound organization capable of handling the goals that we have set forth for next year. We’ll do it for sure, but if there is anything we’ve learned this year it’s that communication and organization will be what help us reach our goals.

Was it intentional to program films that resembled the landscape (and vice-versa)?

Programming to me is one of the greatest jobs in the world. I’m blessed with this opportunity to share work that I think is exceptional with a community that gets it, is excited for it and might otherwise not have the opportunity to experience it. Maine is a unique state—the motherland, the continent’s final frontier—call it what you will, but the originality of this state allows me the opportunity to program without constraints. We base decisions on story, and for a state that has a rich history in traditional storytelling, it seems to work quite well.

How do you balance programming artistic/poetic films with social justice/social responsibility films?

CIFF’s programming has been shaped over several years. We started out in ‘05, screening a number of challenging social issues docs and while we realized that there was an audience, we also realized that it’s very difficult to have three days of intense programming. Since then we have been working hard to find a balance between the two—focusing on story and character development. I think this year we found the perfect mix. Social issue docs open a whole new door in the sense that it allows us to organize post screening panels to create and continue conversation on the films’ themes. I also see so many talented artists out there pushing the boundaries of the form and this excites me. I want our festival connected with these voices, I want our festival to continue to grow with these artists and provide an outlet for these voices to be heard. It’s a balance and what I’ve learned over the years is that it’s best to have something for everyone.

How is CIFF different from other festivals?

CIFF is different then other fests I think because of its intimacy. Our festival is held in a town with a population of 5000 (Camden) and a population of 7000 (Rockland). The closest city is 90 miles away. When you are here, you are here and that’s all there is to it. What this does is opens the door for actual conversations about the art form or about social themes exposed. I’m hoping we will become a documentary think-tank, an annual destination for filmmakers, industry, press and doc lovers to come together, enjoy the most beautiful coastline in the US, experience what small-town charm really is, and most importantly roll out the red carpet for documentary filmmakers. This is a festival for them.