(“Digital Gods,” Nick Toti’s outstanding series on underseen digital films and filmmakers continues with a road trip to Vegas to hang out with the…errr…enigmatic Kokofreakbean.)

Everything about the maximalist, dada, chaos-priest animator Kokofreakbean is designed to short-circuit intellectual engagement. His work is like crashing from an Adderall binge in a VR haunted house or what religious ecstasy would feel like if it was monitored by lab technicians in a corporate research clinic. If a Xerox machine grew sentient and then subjected itself to the arcane dogmas of a pre-colonial mesoamerican death cult, it would call itself Kokofreakbean.

The prospect of trying to write intelligibly about this work is terrifying, so I’ll just shut up and start with an example:

Kokofreakbean lives in San Antonio with three generations of his family in, what he describes as, “a real goddam Mexican longhouse.” He also claims to have undergone numerous gender-reassignment surgeries, from male to female and vice versa, and has expressed a preference for being referred to by the Lewis-Carroll-esque pronouns “squee” and “squirm” (a request that I am denying for the sake of readability). Every time I see him, he’s worn a giant anime-robot mask and, to this day, I’ve never knowingly seen his face (though I suspect it’s made appearances in some of his videos).

I’m thinking over these various absurdities while making the drive from Los Angeles to Las Vegas where I’ve made arrangements to spend Halloween weekend with Kokofreakbean and Angel. I prepared for the trip by doing as much research as I could, but every informative path seems decidedly untrustworthy – from his completely gonzo Off the Air interview to the fact that the only source of biographical info for him is a dubious Linkedin profile. My wandering thoughts keep searching for a way to reconcile Kokofreakbean’s anarchic creativity with the Western landscapes I’m passing through on my way to meet him. His aesthetic mixture of bland stripmall architecture with neon digital vomit seems like it may find its ideal setting in Las Vegas, that garish monument to unchecked vulgarity rising nonsensically, like a mystical vision, from the dusts of a brutal desert.

These reveries are interrupted by a phone call from Angel as I’m entering the city.

“Hey. Can you stop and pick up a plunger?”

I have very little information about why these two are in Vegas. Maybe Kokofreakbean has plans to capture the imagery and sounds for use in a future video. I ask, a little giddy at the prospect of some minor collaboration, if the plunger will be used as some kind of prop.

“No, Koko clogged the toilet and we’re afraid to tell our host.”

When I arrive at the Airbnb, which is in a low-income housing project equidistant from towering casinos and an indoor shooting range, Angel meets me outside. He’s sharply dressed in a black suit with a small American flag pinned to his lapel. He warns me to wait at the car. The plan is for me to stay here with them, but apparently our host has been intentionally left ignorant of my presence. I hand Angel the plunger and wait in the car. Fifteen minutes later I receive a text telling me it’s safe to come inside.

Having spent time with Kokofreakbean before, I’m mentally prepared to encounter the full-bodied costume of some sort of scifi-koala-geisha. Instead, though, he emerges from the bathroom, drenched in sweat, plunger in hand, wearing the cheap rubber mask of an old man’s face, and decked head-to-toe in “Trump 2016” paraphernalia.

“It’s about goddam time!” he screams. Turning to Angel, he points the still dripping plunger directly in my face. “Why isn’t he in costume yet?”

Before I have a chance to gather my thoughts, the two are forcibly pulling my clothes off and passing me various wardrobe combinations. Eventually they settle on a white leisure suit worn over a sky blue t-shirt. Kokofreakbean places Angel and me side by side. 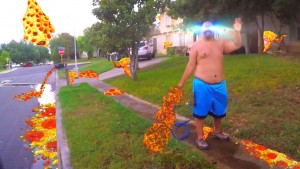 “Masks!” he shouts. “Where are the goddam masks?”

Angel picks up the black t-shirt I arrived in and holds it up to me. “May I?” he asks, but before I can answer, Kokofreakbean begins ripping the sleeves off and tying them around Angel’s face. They then pull an opaque white fabric stocking over my head and top it off with a matted, sticky black wig.

At this point, Angel and I are both effectively blind. Kokofreakbean grabs our arms and leads us out to my car. Having helped himself to the keys from my discarded pants pocket, he shoves us into the backseat and starts the engine. Changing the station to conservative AM talk radio, which he blares at full volume, Koko screams, “Let’s make America great again!” and peels out for unknown locales.

The rest of the night is a blur of clanging sounds and jostling bodies as Kokofreakbean drags Angel and me in search of “the worst casino in Vegas.” We periodically stop on the strip to take video of things like Angel brushing his teeth while I scream like a carnival barker at unseen passersby. Every 15-20 minutes, someone lifts up my mask and pours a shot of Jameson into my mouth. My last lucid memory from the night is from the Double Down Saloon, where I can finally take off my mask. My vision blurs with the sight of a rowdy punk show. Angel is passed out at the bar. I stumble around the room for a while before spotting Kokofreakbean being propositioned by an incredibly drunk prostitute. She takes his “Make America Great Again” cap and places it on her head.

The room starts to spin as a wave of nausea hits, and I push my way to the bathroom at the back of the club. Over the sounds of the anonymous punk band, I can hear Kokofreakbean scream, “I did it! Thirty goddam years and I’ve finally touched my first pair of tits!”

I dream that night more vividly than I have in years. Wagner’s Parsifal is being staged on a Scottish bluff. The scene is my father’s funeral. When I deliver the eulogy, my aria comes out as the sounds of bells and sirens, like a slot machine hitting a row of lucky sevens. Pulsing lasers beam from my chest, demolishing the fragile coastline, and the funeral procession marches blindly into the sea.

The next morning I wake up, face-down in a pile of costume jewelry, as hungover as I’ve ever been. Kokofreakbean and Angel are already up and eating breakfast. “Nick!” Kokofreakbean, still in full costume, shouts at a much higher volume than I’m physiologically capable of handling. “You’ve got to try this vegan scramble! Best goddam vegan scramble I’ve ever had!” I turn down the food and politely tell them that I should probably start driving back. Before I leave, though, they ask if I can drop them off somewhere. I agree and nurse a lukewarm cup of coffee while waiting for them to finish their food.

We pile into the car and Angel directs me where to go. Kokofreakbean, from the backseat, yells in alternating agreement and indignation at the conspiracy theorists on the radio. Eventually, Angel has me turn into a church parking lot. There is a sign outside of an auxiliary entrance that reads “Silent Quaker Meeting.”

“That’s the goddam place! These assholes are about to learn a thing or two about the real silent majority!”

I stare blankly as they exit my car. Angel sort of half-turns to wave goodbye, but Kokofreakbean is already kicking open the church door and screaming at the unsuspecting Quakers. With no place left to go, I put the car in drive and start heading West, grateful that the sunrise is behind me.