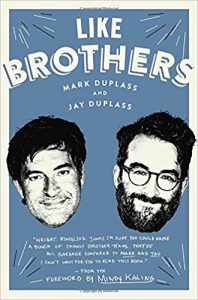 I’ve been a fan of The Duplass Brothers (Mark and Jay) since I stumbled across their first well-received short film This is John back at Sundance in 2003. The short was like a lightning bolt to me; inexpensive (which was the angle they went with to promote it, seeing as the audio tape which is the main prop was $3.00, making that their “budget”), hilarious and awkwardly truthful to the point of discomfort. If you’ve never seen the short, do yourself a favor and spend seven minutes watching it and learn a bit about trimming the fat out of your short film as well as economical storytelling. The short was also inspiring to me because as an aspiring filmmaker, these two affable guys from nowhere special made a comically brilliant short film for basically nothing that got them into Sundance. They were also spectacularly nice guys and have always been friendly towards me since we met way back then. In short – I’m a Duplass Brothers fan and I was excited to read their new book, titled smartly, Like Brothers.

Much like the brothers themselves as well as their body of work as writers, directors and more recently actors, Like Brothers is a friendly, charming book with tons of insights as well as funny asides and enough awkward moments that border on “TMI” that they start to feel like, well, a Duplass Brothers movie or show. This almost…baring of their souls truly works in favor to readers as you really get a sense of who Mark and Jay Duplass are as co-workers, co-creators and brothers. These three designations are all so severely intertwined it becomes admittedly difficult for Mark and Jay as well as their loved ones to know where one stops and the other begins. If that sounds weird and vaguely uncomfortable, it is. And the brothers know it and make note of it throughout the book. In fact, I think the book ultimately serves as a closing chapter for a certain part of their careers but, more on that later.

From stories of sleeping together in a twin bed (by choice, they had their own rooms) until well into their college years to how the two work together on projects, the book uses their filmography as a backbone or roadmap where readers follows the path The Duplass Brothers took to where they are today. Of course, the big issue with entertaining, well intentioned and truthful stories of indie filmmakers who have “made it” is that, the landscape has changed so drastically in the last decade and a half of the journey being relayed, the cynics won’t be the only ones who know that “making it” doesn’t work the way it did not so long ago. The Duplass Brothers are talented guys who hit at the right time, following in the low-fi footsteps of Richard Linklater, Robert Rodriguez (who’s 1996 book Rebel Without a Crew is a kindred spirit to this one) and Kevin Smith . There’s also  films like Napolean Dynamite which exploded in 2004 and Little Miss Sunshine in 2006 to thank. Why? Because wedged between those two lil indies that could was The Duplass Brothers 2005 gem The Puffy Chair. Right place, right time, right festival. Here in 2018, none of those three things really exist any more.

However, the Brothers Duplass know this and that’s not the purpose for Like Brothers. Rather, the book details how the two followed their gut in most situations which is a lesson many filmmakers and creatives don’t learn soon enough. For instance, many bigger distribution companies wooed the brothers with fat cash to distribute The Puffy Chair but they ended up going with a little unproven upstart named Netflix because it felt right. They even scored stock options in the deal which turned out to be a fairly sweet coup for two young filmmakers. 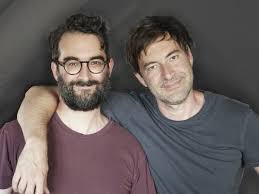 Obviously, there’s no real “how to” manual when it comes to making a living as a creative. There’s just stories and thoughts and a sharing of ideas that constantly flow and Like Brothers seeks to be part of that. The Duplass Brothers even say they don’t know the right way to “make it,” they’re just sharing how they did it and it’s a compelling ride. The anecdotal, affable nature of the way the book is written, with the brothers each doing separate chapters as well as ones together, made for an easy, inspiring read. I say that as a person who loves to read but is incredibly slow at it who still managed to tear through the book in a week. I’m also a sucker for biographies and the almost historical documentation of a filmmakers oeuvre, their successes and failures and Like Brothers is pretty warts and all in that regard. It’s refreshing to see how the sausage of the past was made and I appreciate the honesty on display throughout.

In 2015, Mark Duplass gave the keynote address at the SXSW Film Festival. It’s available on YouTube and the speech also occupies a chapter in the book. In the speech, Mark Duplass lets filmmakers know, without hesitation or condescension that the cavalry isn’t coming to help upstart filmmakers. In many ways the speech is also the basic outline of the book, at least in terms of “how to make it” by starting small, gaining notice and kind of leveling up in the process. This path most definitely still holds true even though the cinematic media landscape is flooded making it much more difficult to get a foot in the door. But as is the case with Like Brothers and in Mark Duplass’s SXSW keynote, the only way to really make it is to keep trying. While the former athlete brothers never swipe Wayne Gretzky’s well known quote aloud, at least not in the book, “you miss 100% of the shots you don’t take” is an unspoken mantra.

In addition to the tale of The Brothers Duplass, the book makes constant reference to what’s happened in the past when Mark or Jay seek to do something without the other. Be it simply attending a party or possibly directing something alone, these guys are so deeply enmeshed and highly sensitive that throughout their careers, being apart has tended to blow up in their faces before an idea even reaches the planning stages. As mentioned, Mark and Jay switch out in various chapters and another big takeaway from Like Brothers is an almost “mea culpa” attitude for each brother glomming on so tightly to the other that it becomes suffocating. As Like Brothers came to a close, I couldn’t help but feel Mark and Jay Duplass might be letting fans know they will branching out to do different things creatively and the book is almost a way to test the waters or maybe hold one another accountable?

While Mark Duplass has always been “the face of the franchise,” so to speak., Jay Duplass has been letting his more quiet, introspective side come out by performing solid roles in films like Lynn Shelton’s meditative Outside In. Mark has also started to shake up his image a bit in darker roles like Aaron in Patrick Brice’s terrific indie thrillers Creep and Creep 2. Both Duplass Brother’s have also been putting their money and fame where their mouths are with diverse producing projects like Netflix doc series’ Wild Wild Country and Evil Genius as well as producing films with younger filmmakers like J. Davis (Manson Family Vacation), Hannah Fidell (6 Years) and Linas Phillips (Rainbow Time). I have a sneaking suspicion, based on nothing at all aside from reading Like Brothers, that some solo writing and/or directing work from Jay and Mark might be around the corner. Whatever happens, the guys are on a roll and Like Brothers is a fun read that also serves to fire up the depressed creative inside of you.