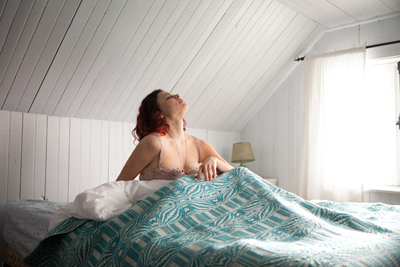 Laurence Anyways (Breaking Glass) — For Quebec filmmaker Xavier Dolan, more is more is more. With each new effort, Dolan has deepened his vision, expanded his scope and breadth to include more ideas, emotions, characters, stuff. In his first, I Killed My Mother (J’ai Tué Ma Mère), a teenage Dolan barked, yelped, and squawked at his mother (Quebec actress Anne Dorval) who responded in kind while the Dolan stand-in grappled with his newfound sexuality and his mother’s reaction to it. In his sophomore effort, Heartbeats (awkwardly translated from Les Amours Imaginaires), the familial relationship was exchanged for a young-love-triangle, frivolity, endless slo-mo, French New Wave nods, essentially a hyper-stylized music video chic. Here, Dolan allowed himself to float between the real and magically real; lust expressed as The David (Neils Schneider) bathed in marshmallows against a sky-blue backdrop. These two films are set in his native Montreal and indeed exhibit the city’s best characteristics: a North-American base with European inflection. Third comes the new Laurence Anyways. This time set in a nostalgia-soaked early ’90s Montreal, Dolan delivers a sprawling nearly three-hour venture about a man who wants to become a woman and the toll this takes on his relationship with his girlfriend. It often seems Dolan has put everything into this film: every imagined scene, gesture, song, place, perhaps every thought that’s popped into his head. And though this can result in over-indulgence, Dolan has managed to stitch together a world teeming with love, loss, family and its myriad entanglements, romance, vibrant colour, shape, sound… pretty much everything. Read Jesse Klein’s full HTN review. Available on DVD

I Married A Witch (Criterion) — Available on DVD

Ain’t In It For My Health: A Film About Levon Helm (Kino Lorber) — Available on DVD

Much Ado About Nothing (Lionsgate) — Available on DVD

The Purge (Universal) — Available on DVD

Shot in the Dark (HBO) — Available on DVD